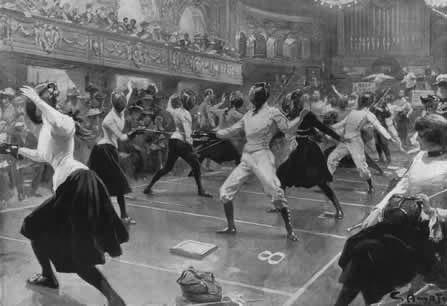 In the first volume of The Sportswoman’s Library (1898), editor Frances Slaughter states:

“It is during the last ten years that women have come to be reckoned as a power in the land, in the matter of sport, and it is now a matter of course for the novelists of the day to make their leading women-characters of almost all classes, join in some one or more form of out-door recreation. Vivid pictures of the hunting-field, the banks of the salmon river, the croquet lawn and the golf links, show the love of the nineteenth century maid and matron for the healthy out-door exercise, which has given to the younger generation a physique that would have been regarded with wondering awe, not unmixed with disapproval, by their gentle and delicate great-grandmothers.”

The sight of panting, dirty, exhilarated, and flushed young women after a rousing game of field hockey or tennis, or after riding to hounds was the complete antithesis of proper womanhood. Though women played sports to varying degrees from the Middle ages on, by the 18th century, sports had become a distinctly masculine enclave. The tide began to change in the mid-Victorian era, with feminists both male and female, expressing the uplifting and educational qualities of recreational activities. It also wasn’t a coincidence that the rise of female higher education occurred almost simultaneously with the rise in women’s sports. The tenets of “Muscular Christianity,” wherein physical strength and health were linked with moral health (thereby equipping men with the tools for leadership and rule), found its place, albeit in feminine form, in the physical activities promoted at girls’ public schools and universities. The result gave women a more invigorating existence and challenged the notion of traditional femininity.

Women’s magazines and periodicals echoed this new development, and the leading weeklies of the day, such as The Lady or Queen, included detailed columns about the latest sports alongside articles about fashion, gossip, and the like, and magazines devoted entirely to ladies’ sports, such as The Ladies’ Field, found a large and enthusiastic audience. Authors such as L.T. Meade and Angela Brazil built their careers writing “modern schoolgirls’ stories” which focused on active and sporting girls at fictional girls’ public schools, much in the manner of the large canon of entertaining stories following the exploits of public school boys, which helped to further cement the acceptability of the sportswoman.

Playing the Game: Sport and the Physical Emancipation of English women, 1870-1914 by Kathleen E. McCrone
Ladies of the manor: Wives and Daughters in country-house society, 1830-1918 by Pamela Horn

0 replies on “The Edwardian Sportswoman”