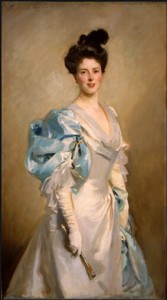 Between the years 1870 and 1914, hundreds of American heiresses flooded the shores of Britain and Continental Europe. To this day, their influence (and lineage) can be traced through many noble European households, and even some royal ones (Princess Diana was descended from New York heiress Frances Work, and the mediatized House of Croÿ is lead by the grandson of an American heiress).

Despite protestations to the contrary, Americans have always been fascinated by titles, whether royal or noble, and prior to the massive influx of American girls in the late Victorian era, there was a little wave of Anglo-American matches in the colonial and Federal eras (1780s-1830s). In 1798, a daughter of the governor of Pennsylvania married the Marquess de Casa Irujo, the Spanish minister to the United States, and John Jay, the first US Chief Justice, had two granddaughters who married successively, the 6th Viscount Exmouth. Three Caton granddaughters, descendants of a co-signer of the Declaration of Independence, married the 7th Duke of Leeds, the 8th Baron Stafford, and the 1st Marquess Wellesley, brother of the Iron Duke, respectively, and the first royal-American match was made between Betsey Patterson and Jerome Bonaparte, future King of Westphalia. 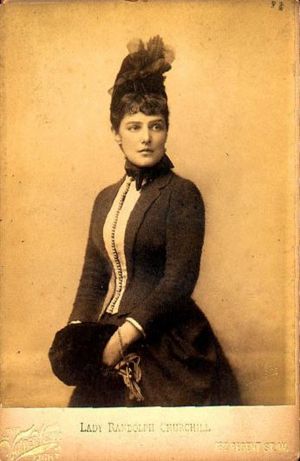 The spark that lit the flame of Anglo-European matches after a forty year hiatus was the 1874 marriage of Jennie Jerome of Brooklyn, New York and Lord Randolph Churchill, second son of the 7th Duke of Marlborough. Jennie and Randolph never thought their impulsive love-match would trigger the ambitions of social-climbing American millionaires born of the post-Civil War, but the subsequent marriage of her friends Consuelo Yznaga to the dissipated Viscount Mandeville (future Duke of Manchester) in 1876, and Minnie Stevens to Colonel Arthur Paget in 1878 sealed the fate of the nouveau riche American heiress.

Cut from exclusive American social circles, newly rich mamas made a mad dash for London, where, under the influence of the Prince of Wales, society craved the spirit and independence (and money) of the American girl. Of course all did not run smoothly in the early years of the rush, as evidenced by the Duchess of Marlborough and her circle who, according to Jennie, “looked upon [the American girl] as a strange and abnormal creature, with habits and manners something between a Red Indian and a Gaiety Girl. Anything of an outlandish nature might be expected of her.” 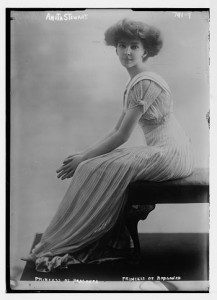 In 1895, nine American heiresses married titled British men, including a duke, an earl and three barons. But soon there emerged a flaw in the plan: the system of primogeniture only gave the eldest son a title and put him in line to inherit a greater one.

For Catholic American girls, and those who were too impatient to wait for a father-in-law to die, the hunt on the Continent yielded better results: one could become a Princess; that must certainly be higher than a Duchess! And so, the princely and noble titles of Austria-Hungary, France, Germany, Italy and Spain were also blessed by Providence with restored coffers and manor houses. Russia was not for the faint of heart. If one wished to brave the bracing weather and the even colder Romanov court, princely titles abounded (and some even related to the Romanovs–though if one aimed too high, as in the case of Harriet Blackford, who wished to marry Grand Duke Nicholas, the Imperial Family was apt to deal harshly with both parties). 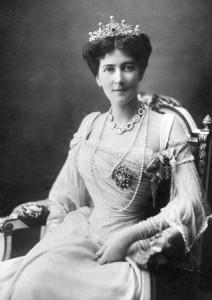 Though many European-American alliances ended dreadfully, a few American women proved their mettle by assisting their husband’s ambitions. Mary Leiter, who married George Nathaniel Curzon in 1895, eventually became Vicereine of India–the highest social and political position in the British Empire behind the Queen. Despite being relegated to the shadows of history, Mary Endicott, wife of Joseph Chamberlain, was her husband’s partner and equal during his long and controversial political career.

Another American heiress who held all the cards was Anita Rhinelander Stewart. In 1909 she met Prince Miguel de Braganza, whose father was referred to as the Pretender to the Portuguese throne, and three months later, they were engaged. At first it was announced that the marriage would be morganatic, but Anita refused to accept anything less than the title of princess. And she got it: Emperor Franz Josef of Austria-Hungary, who extended hospitality to the exiled Braganzas, created the tenacious American the Duchess Vizeu & Princess de Braganza in her own right.

Before Grace Kelly, there was another American Princess of Monaco: Alice Heine of New Orleans and widow of the Duc de Richelieu. Alice married His Serene Highness, Prince Albert I of Monaco in 1889. To their marriage she brought a strong business acumen and worked hard to change the reputation of the principality from that of a gambling den to a place of culture. It was Alice who established the Opera house and installed a director who brought the world’s greatest operas to Monaco. Alice and Albert’s relationship cooled soon after their marriage, and she took a series a lovers, the most notorious being Isidore de Lara. Fed up with his wife, Albert made their break public when he slapped Alice in the face at the Opera when she stopped to whisper to her lover.

She packed her bags in 1902 and left Monaco forever.

Besides Lady Randolph Churchill, the best-known American heiress is the Duchess of Marlborough, née Consuelo Vanderbilt. This derives partly from the delightful memoirs she published in the 1950s, and partly by the fact that she was one of the wealthiest heiresses of her time, with a dowry of approximately 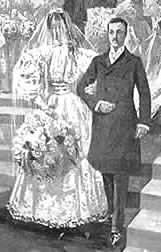 $2.5 million ($75 million in 2008 dollars), and wed, in 1895, one of England’s premiere dukes. In her memoirs, she recounts the vigorous training and tutoring enforced by her mother Alva, and the secret fiancee she was forced to release when her mother set her sights on Consuelo marrying a titled European.

Though no one knew it then, Alva Vanderbilt feigned mortal illness to convince her daughter to accept the proposal of the 9th Duke of Marlborough, and the poor girl wept the entire way to her wedding. Their marriage was obviously unhappy, with the duke informing Consuelo he’d given up the woman he loved to marry her on their honeymoon, and by the birth of their second son (she coined the phrase “the heir and the spare”), their marriage was on the rocks. When they petitioned for divorce in 1906, the scandal rocked English society and King Edward made his disapproval known.

From familial pressure, and the possible revelation of Consuelo’s aborted elopement with the also married Viscount Castlereagh, they settled for a legal separation. Both now banished from court circles, Consuelo turned her pain into helping the needy and raising her sons. They eventually divorced in 1921, whereupon Consuelo married Jacques Balsan, and Sunny, another American, Gladys Deacon. 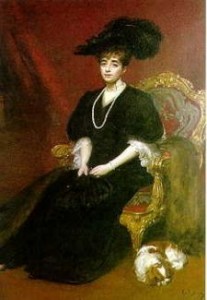 American women continued to marry European noblemen after the Great War, but the men were different, and so were the women. The devastation of the war created hundreds of nationless aristocrats, and also hundreds of fake aristocrats, who were eager to take part in the frantic pace of the 1920s and 1930s.

But to take part, they needed money, and as aristocrats they were unaccustomed to work and most likely had no qualifications for work. These aristocrats became out and out fortune hunters, and as before, the American heiress (many of this new generation, free from parental control, were more susceptible to blandishments given by a shiny coronet) stepped in to fund the playboy lifestyle. America is built on democracy, but the lure of a title will forever play into the daydream of the fairy tale. (left, Anna Gould, Comtesse de Castellane and Duchesse de Sagan)

Further Reading:
Crowning Glory by Richard Jay Hutto
The Glitter and the Gold by Consuelo Vanderbilt Balsan
The Reminiscences of Lady Randolph Churchillby Mrs. George Cornwallis-West
Heiresses and Coronets by Elizabeth Eliot
Consuelo and Alva Vanderbilt: The Story of a Daughter and a Mother in the Gilded Age by Amanda Mackenzie Stuart
To Marry an English Lord or, How Anglomania Really Got Started by Gail MacColl & Carol McD. Wallace
The Million Dollar Studs by Alice-Leone Moats
In a Gilded Cage. From Heiress to Duchess by Marian Fowler
American Jennie: The Remarkable Life of Lady Randolph Churchill by Anne Sebba
The Dollar Princesses: Sagas of Upward Nobility by Ruth Brandon
Gilded Prostitution: Status, Money, and Transatlantic Marriages, 1870-1914 by Maureen E. Montgomery

18 replies on “The American Heiress”