The lives of courtiers in the Edwardian royal household was smarter and more opulent than during the reign of Queen Victoria, but pomp and ceremony remained (and was even heightened, since Kind Edward VII was more conscious of his regal appearance and accouterments than his mother). Though the position wasn’t extremely coveted, since a maid of honour was required to be “on call” even outside of her waiting period, but for a young lady of gentle birth and impecunious purse, court life widened the scope of life she could ever hope to experience.

A Maid of Honour must be the granddaughter of a peer, if not nearer in blood; for, unless some special provision is made, the office cannot be held by anyone below that rank. Secondly, she must be a good linguist, not only because of the foreigners she will meet at Court, but because she will be prevailed upon to deal with some of Her Majesty’s private foreign correspondence. Her conversational powers must be considerably above average, she must possess a talent for music and singing, and an ability to read aloud with clearness and expression.

On all State and semi-State occasions, they take their place in the Queen’s suite, and accompany Her Majesty to any charity function she may attend. When the Queen pays a private visit, too, a Maid of Honour is usually in attendance, also when she goes to the Opera to theatre. When the Queen holds a Drawing Room for the presentation of debutantes, her Maids walk in the Royal procession to the Throne Room, and stand immediately around Her Majesty during the ceremony. This also applies to State concerts and State balls, when they sit immediately behind the Queen and Royal Princesses.

Queen Alexandra abolished the £1000 dowry, chiefly on account of one year several Maids of Honour married within a few months of one another, after a period of service so short as to be quite inconsonant with such a large dowry. Queen Alexandra there arranged that £100 a year should be added to the allowance of each Maid of Honour, so that each now receives £400 annually and no dowry. It cannot be said to be a munificent allowance in view of the expense entailed for Court dresses, etc. In Queen Victoria’s time, her Maids of Honour spent a quarter of their pay on gloves as they were never permitted to enter “the presence” with bare hands. Queen Alexandra objected to striking apparel, such as big hats and vivid colours, and preferred her Maids of Honour wore soft shades of color such as gray, white, and mauve. 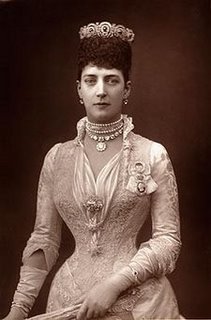 In the old days at Marlborough House, when the late King was Prince of Wales, says a writer in the Lady’s Realm, the exclusive afternoon tea parties given by the then Princess of Wales to her most intimate friends in the celebrated “Marlborough House” set were a special and most delightful feature of Royal hospitality.

This season Queen Alexandra has revived this form of entertainments, though naturally Her Majesty’s guests are strictly limited in number and are confined to members of the Royal family or those honored with Queen Alexandra’s most intimate friendship.

Afternoon tea when guests are present is usually served in the Red Saloon, one of perhaps the most beautiful apartments in Marlborough House. It is one of the spacious reception rooms on the first floor, and Queen Alexandra particularly interested herself in its furnishing when Marlborough House was being rearranged for Her Majesty after King Edward’s death. The room is full of interesting things. On a large table near the fireplace there is a book of sketches done by various royalties which always interests Her Majesty’s guests. Many of the sketches are portraits; a particularly interesting and clever one is a sketch of the present King and Queen done by the Dowager Empress of Russia. It was done at Marlborough House shortly after their Majesties’ wedding. Other royal sketches are by the Duchess of Fife, the German Empress, and Queen Victoria.

Near a beautiful tapestry settee, a present to Queen Alexandra from the Czarina, is a case containing part of Queen Alexandra’s collection of antique jewel boxes. It is a priceless collection and every box has an authenticated history, some of the French jewelled boxes are of the fourteenth century. One of these was, by the way, an anonymous present to the late King; it came apparently from China, but who the donor was never transpired. The most recent addition to the treasures in this beautiful apartment is a clock, said to be five hundred years old. It stands on a table near to the eastern entrance to the apartment.

Afternoon tea is served at four o’clock and is quite an informal entertainment. The guests who would probably not number more than half a dozen arrive a few minutes before the hour, and at four, Queen Alexandra, accompanied by Miss Charlotte Knollys, enters the room. The guests, of course, all rise at the entrance of their Royal hostess and Queen Alexandra shakes hands with each.

Tea is generally poured out by Miss Knollys; though if the guests are very few this office is sometimes performed by Queen Alexandra. The cakes, sandwiches, etc., are handed round by one or two of the younger members of Queen Alexandra’s household, who are usually in attendance on such occasions. It should perhaps be explained that with the exception of Miss Knollys, there are now no resident members of Queen Alexandra’s household. Members whose presence may be required are notified of the fact and they go to Marlborough House in the morning.

In the summer time, when the weather is very fine Queen Alexandra and Miss Knollys nearly always have tea in the conservatory when by themselves, and Her Majesty frequently gets through a portion of her correspondence here in the summer afternoons, but guests are not entertained in the conservatory. Queen Alexandra, when in London, I sometimes honors some of her more intimate friends by going to afternoon tea at their house.

Her Majesty’s hostess is notified in the morning of Queen Alexandra’s intention of taking tea with her in the afternoon, and the lady so honored must, of course, deny herself then to all other callers. This is an established rule of etiquette that anyone who is in the royal entourage understands and observes. In this connection a rather amusing incident once occurred which may be worth telling. It happened in the late reign. Queen Alexandra went one afternoon to tea with a friend who, of course, instructed her servant to deny her to other callers whilst Her Majesty was with her. Now the servant had only recently entered the lady’s service and was not very familiar apparently with the appearance of Royal personages, and he, therefore carried out his mistress’ instructions rather too precisely.

It happened that whilst Queen Alexandra was with her hostess the Duchess of Fife also called, but Her Royal Highness was gravely informed that she could not see the lady whom she called on as the Queen was with her.

“Oh, that doesn’t matter,” said the Duchess of Fife with a laugh,” I am sure she will see me,” and then seeing the doubtful look on the servant’s face she added “The Queen is my mother!”

This announcement induced the servant to show the Royal caller upstairs, though the doubtful look still lingered on his face and didn’t quite vanish until he observed the manner of the greeting that took place between his mistress and the Royal visitor.

Invitations to afternoon tea at Marlborough House are by the way generally written personally by Her Majesty, but even if the invitation is written by Miss Knollys it is never given in the form of a command. It is couched in the informal language a lady would ordinarily employ in giving a friend a quite informal entertainment.

It is the custom for anyone asked to Marlborough House to write her (or his) name in the visitor’s book on her arrival. This is a custom adhered to at all Royal residences. The old visitors’ books at Marlborough House contain a collection of autographs that form one of the most valuable of such collections in the world. The signature of practically all the most notable people in every country in the world may be found in these books. Li Hung Chang’s, the German Emperor’s, Lord Rothschild’s, Mark Twain’s, Gladstone’s, are some of the signatures that one may detect in glancing over these autographed pages. On one page occurs the name “Olaf” written twice; the first signature got blotted, and the blot did not please the little Prince, so he insisted on writing his name again.

The conservatory has, by the way, particular interest for the King and Queen of Spain, for it was there that the Royal couple used to meet very frequently when King Alfonso came to this country in the summer of 1905 to pay his court to the Princess Ena. In those days, of course, Marlborough House was occupied by the present King and Queen, and the then Princess of Wales would frequently ask the Princess Ena to afternoon tea to meet her Royal lover. Tea was served in the
conservatory, there were seldom any other guests, and after the Princess of Wales had performed her duties as hostess the lovers were usually left to entertain themselves. 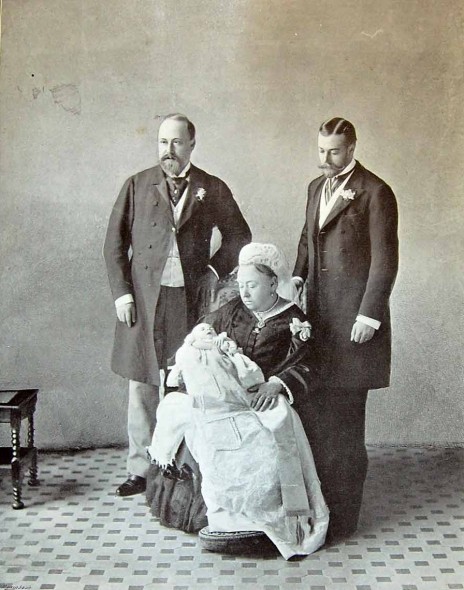 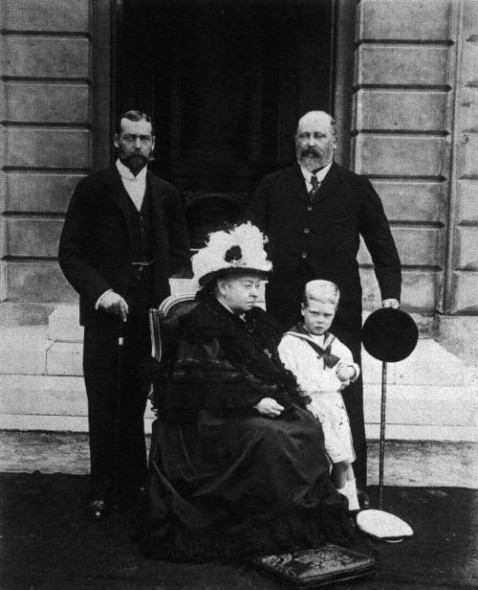