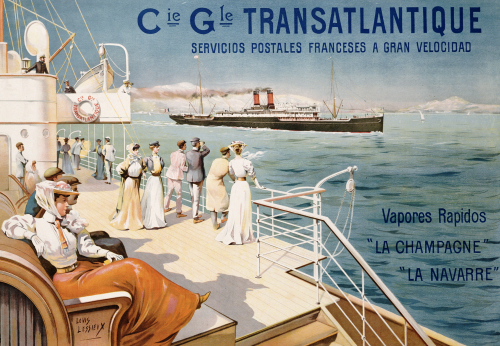 In going from America to Europe, the first and most costly step is always the ocean journey. A note to the different steamship companies, whose boats sail from all the great Atlantic seaports, will bring by return mail an immense amount of literature, wherein the advantages of each particular route are fully set forth, with accommodations and rates suited to all tastes and purses. The second class in some ships is fully equal to the first of others, and there are a few lines which carry only one or two classes.

For “tramp tourists” of the male sex, steerage may be possible at a pinch, but where ladies are concerned, the first or second class cabins alone can enter into consideration. In choosing a cabin, individual idiosyncrasies and tastes must be studied to insure as much comfort as possible. Midship there is the least pitching motion; aft the tremor from the screws is greatest, but usually the odours from the machinery and kitchen are more remote. Outside cabins are more desirable only if the portholes can be opened, height above the water and weather permitting, otherwise the ventilation is exactly the same as for all other cabins, namely, through the ventilating funnels on deck.

The wash of the sea against the hull, the scrubbing of decks at dawn, and the endless tramping of promenaders immediately overhead, prove disturbing to many. Cabins adjoining corridors where there is much passage to and fro are noisy. Therefore they are undesirable to some, while others object to those that are difficult of access from the deck or saloon.

It is always well, if there is any prospect of your crossing during the “rush season” (i. e. outward bound May 1 to July 15, homeward bound August 15 to October 15), to secure the refusal of your cabin by a deposit which will be returned to you, under certain stipulated conditions, in case you find you cannot sail. These conditions are set forth in the steamship companies’ prospectuses, with brief, useful directions about luggage, etc., which it is always well to follow carefully. However, in case the information you desire is not forthcoming, inquiry at the nearest steamship office or through some tourist agency will be sure to elicit all you wish to know.

It is always prudent to secure a round trip ticket in advance, for then you are certain of your return passage, of a cabin or berth when you want it, and you save a trifle besides.

(1) Decide your route in such a way that your visit to any district may not be during the close season, and, at the same time, avoid the high season, unless you like crowds and are prepared to pay high-season prices.

Among districts most frequented between April and October are 7: Switzerland, north-west coast of France, Inland France, Belgium, Holland, Germany, Austria, Norway, Sweden, Denmark. Between September and June: The French and Italian Rivieras, Algiers, Egypt, Sicily, Spain, North Italy, Greece, Palestine, Canaries and Madeira, and the following parts of Switzerland: Swiss-Italian lakes (spring and autumn), the Lake Léman Riviera (almost all the year), and the high mountain resorts, which have their season in mid-winter and mid-summer.

(2) Carefully select hotels at each place you intend to visit, and communicate with the manager, stating approximately the length of stay and the number of party, and asking for terms.

(3) Arrange your luggage in such a way that on arrival everything is suitable for the climate of the country. At table d’hote in Continental hotels men chiefly wear dinner jackets, and ladies high-necked bodices. For dances dress is the same as at home.

(4) Through tickets (single and return, available for a limited period) can be obtained from London to the principal continental resorts by various routes, and in some countries special facilities are offered in the way of season tickets (as in Switzerland and parts of Italy). Reliable tourist agents, like Messrs Thos. Cook and Son, Ludgate-circus, E.C., and Dr Lunn, Endsleigh-gardens, N.W., also supply tickets to and from almost any station. Sleeping car tickets should be ordered well in advance at the Sleeping Car Company’s offices, or at the offices of a reliable tourist agent.

(5) Luggage is registered from London to the principal Continental towns. It should be locked in such a way that at the request of the Customs officer it can be opened without delay. Only light articles should be carried in the railway carriage, and they should in all cases be limited to a portmanteau and travelling bag. Where possible send heavy luggage out ten days or so in advance by petite vitesse or (if wanted soon) by grande vitesse.

(6) English sovereigns and notes pass everywhere, but as Cook’s have banking departments at all their offices abroad, travellers should arrange matters with them before leaving England.

(7) Always tip before leaving hotels—not lavishly or stingily: the former injures fellow travellers, and the latter yourself.

On how to apply for rooms at Continental Hotels

(1) Always write, if possible, in French or German, or the language of the country, whatever it may be. If unable to do so, write a letter in the clearest possible English, couched in very polite terms. The curt, businesslike letter, suitable to a correspondence with an English hotel-keeper, is likely to be resented by the foreign one.

(2) Do not imagine that when you ask for rooms at a fashionable resort in the height of the season, at the lowest imaginable figure, you are conferring an inestimable favour on the hotel you propose to honour, and demand rooms to be reserved accordingly. (Hotel-keepers have shown me such letters from Englishmen.) It is better to ask the proprietor to be good enough to let you know whether he has room, and can see his way to accept the terms you propose, in consideration of length of stay, number of guests, &c.

(3) It is also as well, if he does accept your terms, to ask him to kindly state the position of the rooms he proposes to give you, the aspect, which floor, and whether they are quiet, &c. You will not then be disappointed by finding that you are given a top-floor room looking on to a stable or a blank wall, when you have arrived in the full confidence of finding your rooms on the first floor, with a. view of the sea, or the Alps, at a cost of l0 fr. a day tout compris (when other people are hopelessly offering 25 fr. a day for permission to sleep in a bathroom).

(4) Keep a small supply of unused foreign stamps, and inclose one for reply to your letters.

(5) It is as well to remember that the foreign hotel-keeper takes a somewhat higher position socially than his counterpart in England, who is usually the servant of a company, and that the lady in the bureau is often his wife or daughter, and expects you to take your hat off to her when you say good morning. It is a mistake to resent as familiarity what is merely meant as friendliness and hospitality.

(6) Don’t tell the proprietor to carry your luggage up to your room. He will probably be quite willing to do it, if the porter is not there, but he has a dislike to being taken for the latter.

(7) Do not, if you have any complaint to make, march into his private office with your hat on. as if it were the smoking-room, and expect him to be delighted to see you, and eager to hear what you have to say, when he is possibly getting the weekly accounts made up. Speak to him quietly. when you see he is at liberty—an hotel-keeper has a good deal to see to—and, whatever is wrong, assume that the matter has only to be mentioned to him for him to do his best to put things right. It probably is not his personal fault if there is no water in your water jug, or if your boots have not been taken away to be cleaned, and he may even know nothing of the occurrence.

(8) If you do not like the performance of melodious musicians, who are permitted to come and play outside the dining-room during dinner, try to refrain from giving orders to the head waiter that he is to drive them away. Other guests may not find them disagreeable.

(9) If the windows require opening or closing during table d’h6te, it is thought more considerate by your “foreign ” neighbours (who are possibly natives) if you consult them first as to what they think of the state of the atmosphere, before commanding alterations. It confuses the waiters if‘ they get contradictory orders in divers tongues, and delays the dinner.

(10) Bow to your foreign neighbours on taking your seat next them, and on leaving the table, however much you dislike the look of them. They are scarcely ever as bad as they look (even Germans), and if they are it is, after all, the usual thing to do.

— How to Prepare for Europe by Hélène Adeline Guerber & The “Queen” Newspaper Book of Travel: A Guide to Home and Foreign Resorts

3 replies on “Preparing for Travel to 1900s Europe”