The opening scenes of Channel 4’s Indian Summers shows British families making the journey up the foothills of the Himalayas to Shimla, the Crown’s summer capital. There they will relax in the temperate climate: “dance and forget,” as one Indian observer says. “A hotbed of political, social and romantic intrigue set amid rolling hills,” the Guardian wrote, “no place encapsulates the global ambitions as well as the parochial desires of the Raj better than Shimla.” 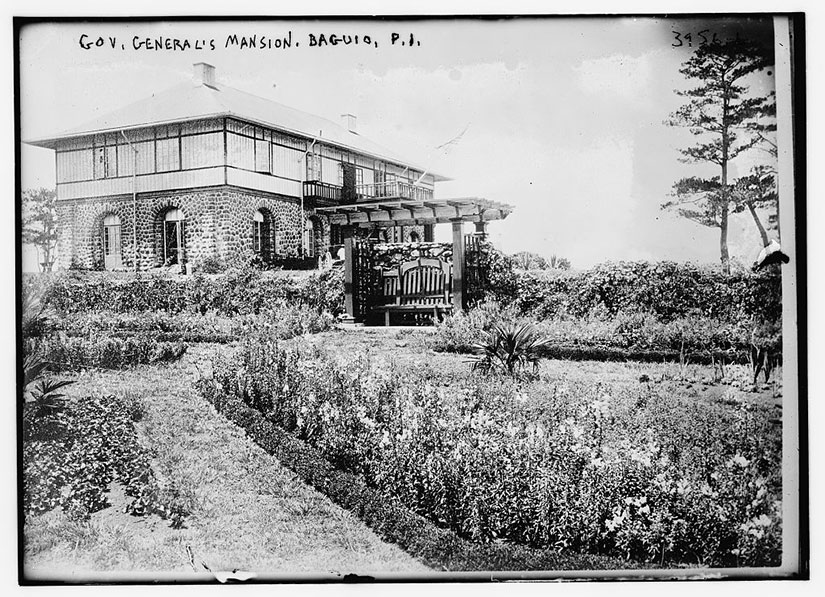 The Americans may have been late to the Great Game, but they would still have time to fashion their own Shimla in the Philippines. It was not until five years into American rule—on June 1, 1903—that the Philippine Commission officially designed Baguio as the Summer Capital of the Philippines. But the site had been chosen years before as a way to escape the heat of Manila:

There are hotter places than the lowlands of the Philippines—hotter places than Manila—but there is none where there is such a never-ending, boundless continuity of heat, day in and day out, week after week, month after month, throughout the whole cycle of the year—none so insidiously saps the vitality and relaxes the springs of energy native to men from colder climates.

Nestled in the Cordillera Mountain Range, this outpost offered “rolling, turf-covered hills, studded thick with fragrant pines, and swept by all the breezes.” The Americans now had a chance to create a town from scratch, one that represented everything they thought they were in the Philippines to provide: an orderly, beautiful center of transparent governance and intellectual inquiry. Yes, American colonial officials took their “City on a Hill” idealism seriously. The only problem was they did not have a way to get up the Hill.

The Yanks envisioned a railroad up the mountainside to Baguio, but they had to settle for a wagon road along the Bued River Canyon. This “simple” trail cost enough to build that by 1906 there was no money left to build a railroad—or to fully develop the city of Baguio itself. And though it was just meant to be a temporary passage, Kennon Road (Route 56), named after the American engineer in charge of the project, still exists. It is the shortest route to Baguio, and one of the most dangerous roads in the Philippines.

The danger is what made construction so expensive in the first place. Initial work began in January 1901 on a cliff above what would become Camp 1. Workers needed to first climb up to dangerous heights, then set dynamite charges, and finally get to safety before the charges blew. Some workers were a little reluctant to scale the cliffs in the first place, and they had to be shamed into it:

On reaching the 50-foot ladder, the men had categorically refused to ascend, proving equally deaf to threats or appeals, and had only done so after the disgusted foreman had ordered his wife to mount: “She did so and the whole party, following her, moved on its way.” 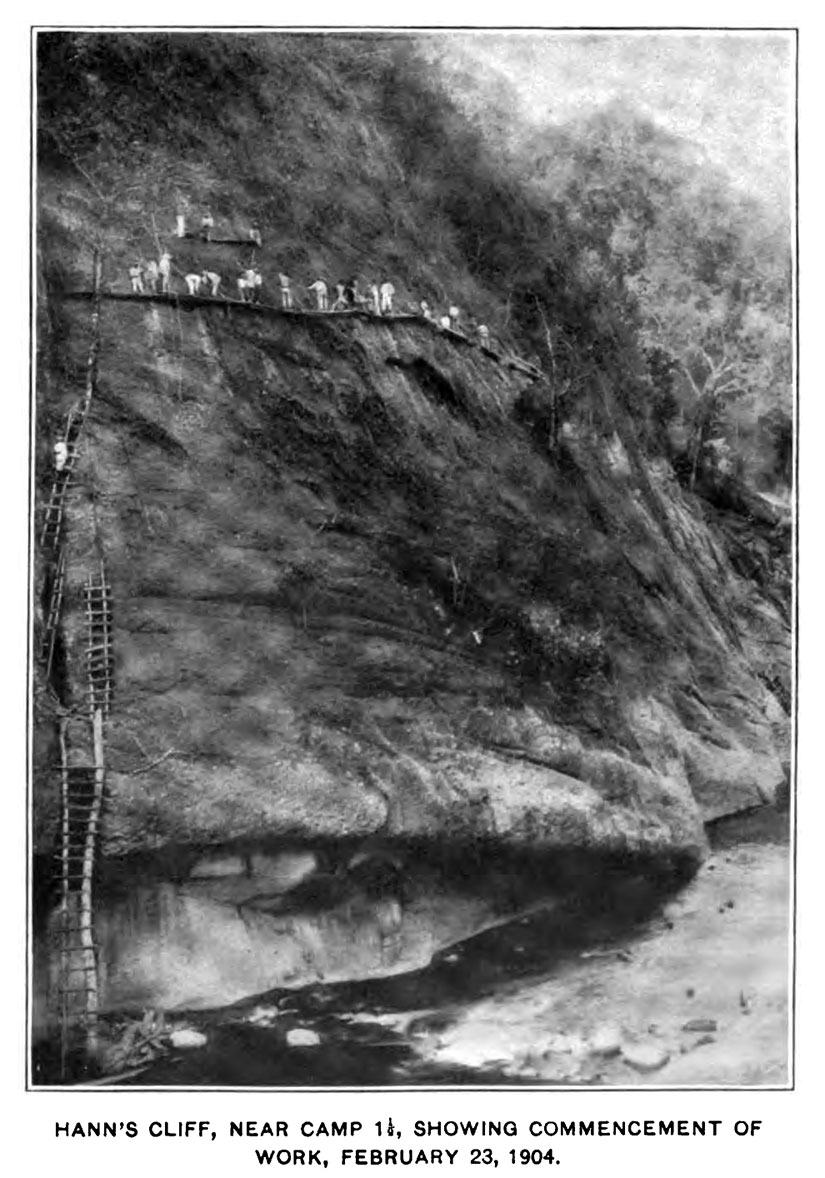 And if the working conditions did not kill you, the other workers might: “a timekeeper was attacked with bolos…and several horses were mutilated by the same means.” Having started construction in the midst of a fierce guerrilla war, recruitment was an even bigger challenge than cutting down cliffs.

The original workforce was made of impressed Igorot tribesmen, considered to be “a vastly superior animal” who could be trusted “without the necessity of a white foreman to watch him,” according to one of the American engineers. (Even when trying to pay compliments, the Yanks could not help but be paternalistic and racist.) Because the Americans disparaged the Spanish-style corvée method—after they had already used it to construct over 1,000 miles of roads in the islands—they felt the need to “raise” the Filipino by offering “fair wages, training, and education.” (Despite their grand talk, they did also try convict labor. But shackled prisoners were not great choices for cliff work. Moreover, these men were a flight risk.) 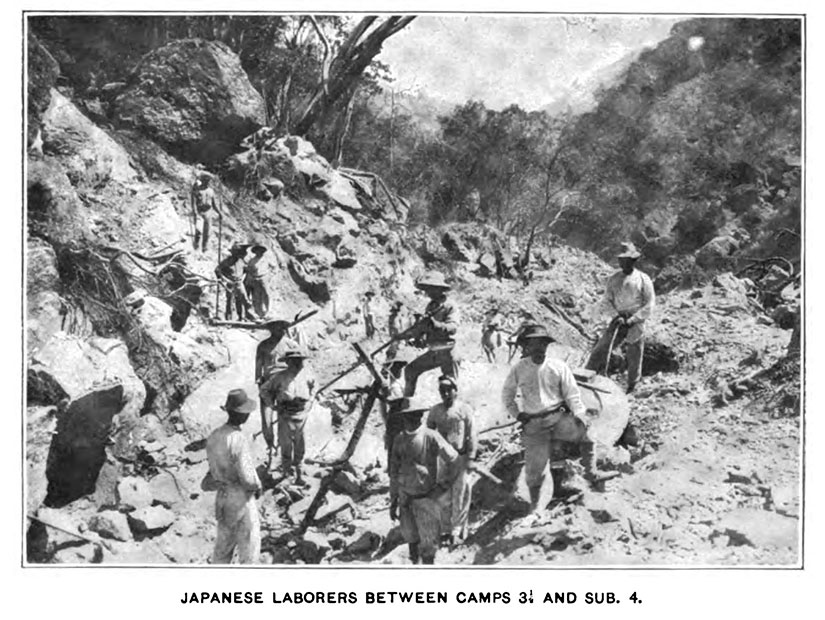 The result was initially almost no workers at all. By January 1903, at the time of the official designation of Baguio as the summer capital, there were only two to four men at work on the road each day. Something had to be done. The Americans started hiring whomever they could get: Native Americans, Hawaiians, Mexicans, Peruvians, Chileans, Indians, Chinese, Japanese, Russians, Germans, Irish, English, French, Swedes, Spaniards, and all the peoples of the northern Philippines, from Ilocanos to Visayans. The men were divided into three groups for bunking and eating: Americans (including all Europeans and Africans), Orientals (Chinese, Japanese, and Indians), and Natives (Filipinos). Americans were paid the most and ate the best: 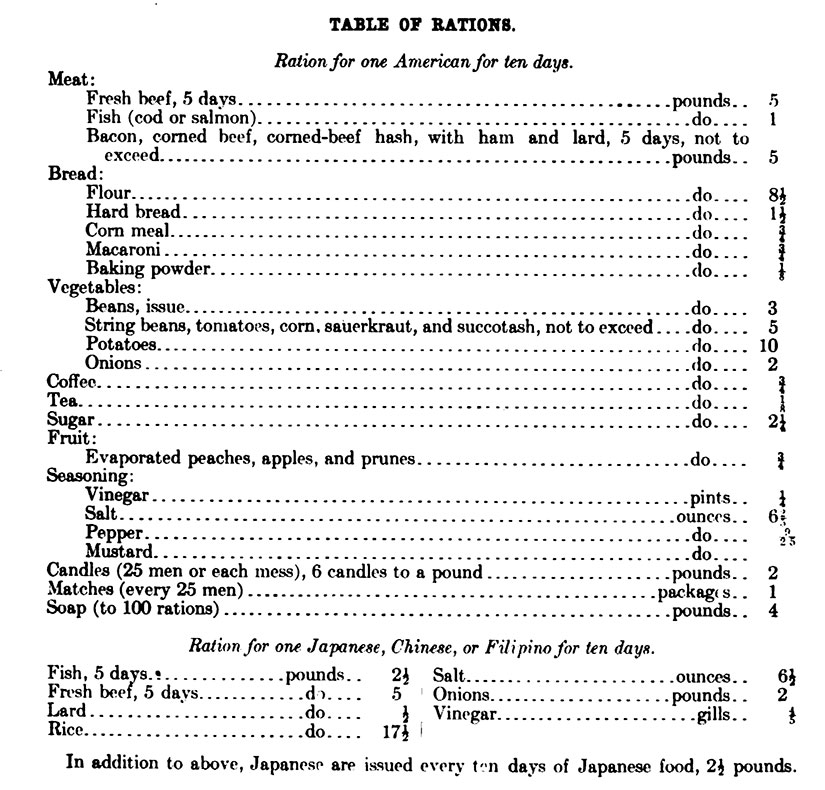 The Americans did try to help out their Filipino workers keep their “fair wages” by not allowing labor agents and patrons to siphon twenty percent off the top in kickbacks. Any foremen taking money from their crews in such an arrangement would be dismissed. One white foreman was sentenced to six months in Bilibid Prison for this kind of graft. Eventually, workers would be encouraged to bring their families up to the road as a way of keeping the men happy and tranquil. There were bands who played during work hours so the men could let “the dirt fly in time to the music.” And there were dances, saloons, and even a cockpit.

By October 1903, there were twenty thousand men at work on the Benguet Road, just under half of whom were Filipinos. A large number of these were folks from northern Luzon, particularly Ilocanos. Despite the full complement of workers, though, most experts predicted that it would still take at least three years to build the road. They did not count on Kennon’s eagerness to win a bet. Someone wagered him that the road would not be passable by January 1905, so on the 29th of that month, Major Kennon drove his calesa from Camp 4 into Baguio—along the most difficult and dangerous stretch of the route, a portion known as the Zig-Zag. Though the road was not quite finished, it would only take another year and a half Kennon handed it over to the Philippine Commission to administer in November 1906.

Traffic on the road was mostly mule teams and ox carts from 1906 to 1909, when Stanley Steamer cars were introduced. The next year, they brought in De Dion-Bouton petrol buses, with the world’s first 70 horsepower, 8-cylinder engines. A ride on these Benguet Auto Line buses was included in a railroad ticket from Manila, which cost P27 per person (about $365 in 2016 dollars) for a first-class fare, and P23 ($311 now) for second class.

That’s steep compared to the $15 bus fare today, but even a $300 ticket would not make up for the cost of building the road itself: P3,923,694. That equals $1.9 million in (gold) 1905 dollars, and $53 million in 2016 dollars. The cost breaks down to P147,895 per mile, or $2 million per mile in today’s terms. Before you call the road a boondoggle, though, know that $2 million a mile is about right for a new 2-lane undivided road in rural areas, according to the American Road and Transportation Builders Association. (Admittedly, they are talking about a paved road that is not regularly washed out by flooding, but who’s quibbling?)

Baguio lost its accreditation as summer capital in 1913, but that did not stop Americans from living and playing there. It is still a favorite getaway for Filipinos and foreigners alike. For many in Manila, “all roads lead to Baguio”—once the Americans built them.

[This post was originally written in an expanded form under the title: “Sugar Sun series location #12: Benguet Road” by Jennifer Hallock, author of the Sugar Sun series.]

0 replies on “The Road to Baguio”