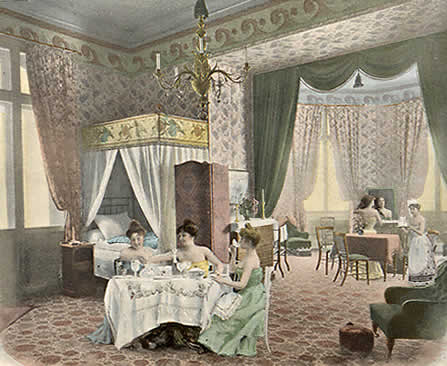 Compared to the Continent, prices are higher in London, where apartments of the first rank are often grouped into what are called “Mansions,” while anything under this in the scale is reckoned as just a plain flat. English people are aghast when they hear one mention a thousand pounds a year as the rent of an apartment in the neighbourhood of Hyde Park or elsewhere in the aristocratic West End centring around Buckingham Palace. Such rentals are not uncommon, but do not comprehend anything at all to be compared with the modern ideas which have been incorporated lately into American apartments at a similar figure. In spite of the advantage that the flat possesses over the house as a labour-saving proposition, the true British housekeeper would much prefer the latter. It gives one a more substantial position, for in England there is still the feeling that life in a flat is a menace to the sanctity of the home.

Life in London “chambers” has romantic associations with the old Inns of Court and ancient and somnolent city squares, where one can live in the atmosphere of dead memories and associations, features that tend to add considerable to the charm of London for the American. Usually “chambers” are to be had at a cheap rental, but also with a few attendant disadvantages. In the Adelphi Terrace, a little backwater just off the Strand that the flood of modernising which is sweeping over London threatens annually to blot out, one can still hope to find vacant “chambers” in a house decorated by the famous Adam Brothers. Before the door, as like as not, will be found an iron standard into which the link-boys once thrust their blazing torches. The whole Adelphi region is redolent of memories of Dickens, who in his youth played about the great storage vaults that burrow under the Terrace from the Thames Embankment below. It is a quaintly interesting district. Here you may see a house once inhabited by Roger Bacon, and across the way is still visible a certain brass door-knocker which figured in one of Dickens’ most famous tales. In almost any of these houses are to be found exquisitely carved marble mantels. The walls are of stone, with a dressing of wallpaper stretched over cloth, which wavers in ghostly fashion in the too-frequent currents of air, like the ancient wall-hung tapestries of a haunted castle.

From the windows of many of these houses one may look out over the Embankment Gardens and the foggy stretches of the Thames. The Royal Chapel of Savoy is a near neighbour, and ghosts, of Dickens’ characters float around every corner. On a winter’s day at four o’clock the muffin man, ringing his bell, still makes his round of the district. Muffins and crumpets for afternoon tea at twopence each are a pleasant interlude and quite in the spirit of this old-time atmosphere.

Hereabout one ought to be able to find five rooms, distributed over two unevenly laid floors, for five to six pounds a month, which is not out of proportion for such genuine historic associations as the rental includes. To discount this there will be a lack of water, hot and cold, except that which flows intermittently from an adapted kitchen sink, and your heat, what does not go up the chimney, is all radiated from grate fires. In these old buildings there are no elevators, no dumb waiters even, and coal, wood and everything else must be lugged up the front stairs, though plenty of willing hands are to be found, and at a small price, to do one’s fetching and carrying. Ashes and garbage must be carried down to a tiny, well-like courtyard, and within the week the dustman will come along to remove it, of course demanding a tip. You may ask why, but he couldn’t tell you if he would, except that it is in accordance with precedent, the thing that governs all walks of English life. The tenants collectively contribute towards the cost of the lighting of the front hall and of the keeping of it clean, the tenants of each floor attending to their own hall.

The cost of living abroad is the cost of the small things of life, and it is their multiplicity that fritters away the time and temper of the housekeeper, more so in Britain than elsewhere. Laundry work is wretchedly done all over the British Isles and at prices quite up to the American standard, while the clothes come home of a shade that matches the London fog, and fresh curtains must be put up each week on account of this same phenomenon. Thus sighs the London housekeeper.

Sub-letting is a common practice in England, but is sometimes prolific of dire annoyance. You may arrive some day at your sub-rented flat to find the bailiff in possession. The law provides that if the original tenant fails to pay the rent, that the upper landlord can attach the belongings of whoever may be living there at the time. There may be no redress, no extenuating circumstances, and you may find yourself in the unpleasant predicament of having to pay rent twice over in order to release your belongings. Of the smaller London flat much the same may be said as of those on the Continent. The various rooms are usually conveniently placed, and everything has not been sacrificed to the economy of space. The English still treat themselves liberally when it comes to fresh air.

An inconvenient British custom is that the outgoing tenant carries away the gas fixtures and the piping as well, and in Scotland the one moving out takes away even the grates. This of course presumes that they brought them with them when they became a tenant; still the inconvenience exists for the incomer, and worst of all, he has to contend with the plumber for a period ranging anywhere from a week to a month, which of itself is discouraging; besides there will be damaged wallpaper and chipped paint, which means the introduction of various other classes of the British workman into one’s daily life for a more or less extended period.

The British workman, for whatever species of labour you have to call him in, is another one of the things that increases the cost and annoyance of living in England. He is the curse of the home and the home-maker, and in his most highly trained form, the most tyrannical labour unionist in the civilised world. He does his work in inconceivably uneconomical ways, for he is slothful and inattentive, and unabashed will ask you for a tip when he finishes, though more often you have to give him one midway in order to get him to finish, all the time running the risk that he will break an arm or a leg during the job, so that you will have to contribute towards his support pending his recovery. He will build you a house at his agreed upon price, but will ultimately send you in an additional bill for coal used in keeping himself warm while he was at work. When the British workman comes in at the door peace flies out of the window, while to get finished with him and get him out of the house usually means a process of law if the job is of any magnitude.

For the moderate consumer living is dear in England, and cheap living, like everything that is cheap in the tight little isle, is bad. One can live as well perhaps in London as anywhere, but one must be prepared to pay for it. In the last five years the necessities of food have gone up approximately one-fourth to one-third in price. One of the commonest of causes for this hoisting of prices comes from the demand for things exotic from America. Grapefruit and even bananas a few years ago were unknown in London, now every one has them and pays the price. When the menu palls, many a London housekeeper goes to Jackson’s in Piccadilly for American groceries (in Paris to Prunier’s), and delicacies from overseas. The American will think it worth while, but she is doubling expenses, and, though the joy may be doubled, there will be a disturbing influence brought into life abroad which was not what she presumably came over for.

~ excerpt from The American Woman Abroad by Blanche McManus (1911)

4 thoughts on “The Costs of Living Abroad in London”