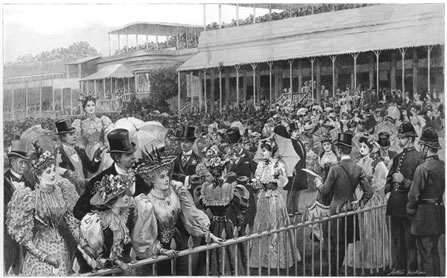 The London season was coincident with the Parliamentary session, and from February to July, the dinner parties and other entertainments arranged for the amusement of the politicians and their families exceeded the sum of those given in all the other European capitals. From the opening of Covent Garden to the Royal Drawing Rooms, to private balls and concerts, and to Ascot (Royal Enclosure, left) and Goodwood, London and its environs were packed with not only Britain’s brightest and wealthiest, but Americans eager to rub shoulders with “my lords” and “your majesties”, Colonial millionaires desiring entree into society and a bevy of European aristocrats. By the Edwardian period, “the ‘ladies game’ of the fully-developed Victorian Season was tacked onto a program of summer events that had in most cases been well established fixtures before the Victorian era.”

As the fashionable world was largely composed of those connected with either the House of Lords or the House of Commons, their families came up to Town around the second week of February, after the best of the hunting was over. The Queen (and after his ascension, King Edward) then opened 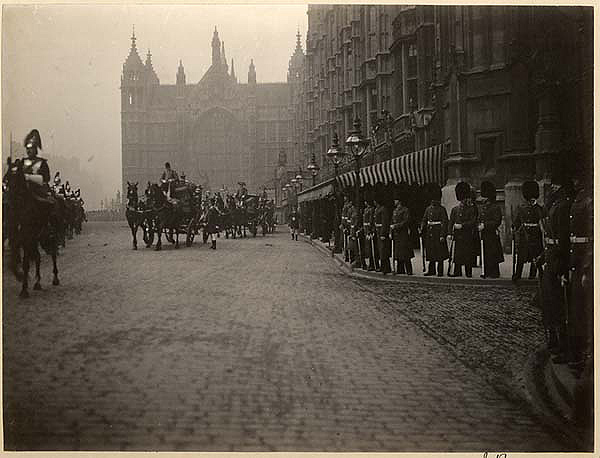 Parliament. Prior to this was the “little season,” wherein those connected with the government, the diplomatic corps, the lawyers, literary people and those of the gentry who had no large estates, remained in Town from November, with an interval of a fortnight at Christmas, until February. This was a more intimate gathering of society and was seen as the prelude to being accepted into the social round the following year.

At the beginning of the year, London was not yet overcrowded as many families chose to remain in the country, but from February until Easter, the city slowly filled. There were a few dances during Lent, and small dinners  and the occasional theatre party were held. Many of the royal levees and drawing rooms were attended, and other evening entertainments were thrown together,while daytime hours were spent in numerous five o’clock teas. When Parliament adjourned at Easter, society hostesses held large country-house parties, while those who had neither country houses nor invitations took a jaunt to the Continent or went to Brighton.

After Easter the full tide set in, everybody was up. The great houses were opened, the Park filled in the afternoon, and the Row crowded every morning with a thousand horsewomen. Lunches were frequent, dinners innumerable (forty people often sat to one sumptuous board), and balls now began. The Queen’s drawing rooms were crowded, and most theatres and operas were abandoned by people of fashion as it was impossible dine at eight and attend a play on the same night. However, this whirl lasted but five weeks when another Parliamentary recess was called and society flit again to the country at Whitsuntide (Pentecost to Americans). 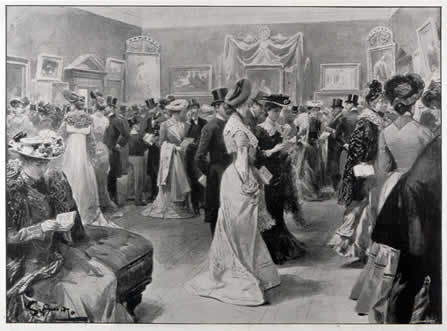 Society returned to London in late May and the traditional starting signal for the Season was the Private View at the Royal Academy, or, vernissage, where the latest frocks could be seen as ladies and gentlemen strolled about examining works of art and discussing them with their artists. From this point on was the height of the season. With late dinners and later balls, visits to old friends and acquaintances, the Sunday Church Parade at Hyde Park (another event in which to see and be seen), attendances at Covent Garden, charity bazaars, and young ladies and new wives of qualified gentlemen making their curtseys in Court Drawing Rooms, days and nights were packed to the brim.

With June came Derby day, Commencement at Eton (4th of June: families visit the boys for speeches and a boat race), Ascot Week, fête and gymkhana at the Ranelagh Club. July featured the major cricket matches between the Lords and the Commons, Oxford and Cambridge, and Eton and Harrow, at Lord’s–all in one week. Garden parties in bungalows and snug cottages along the Thames were held–Chiswick, owned by the Duke of Devonshire, was loaned to the Prince of Wales on the condition that two large breakfast parties were held each week. The Queen opened the grounds of Buckingham Palace for garden parties as well, a trend that lasts into this day. 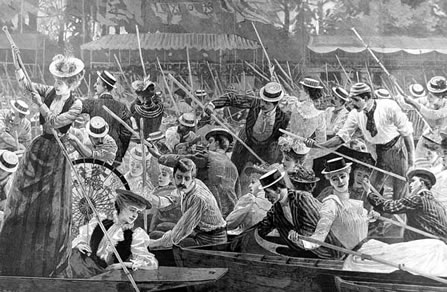 The Duke of Richmond’s race-meeting at Goodwood, the Henley Regatta, Cowes Week and Wimbledon, the last of the fêtes champêtres, were packed into the first weeks of August, and as London began to empty, dinners, parties and the like were crammed in before it emptied completely.

August 12th, otherwise known as the Glorious Twelfth, was the end of the London season, and those who didn’t hare off to shoot grouse or stalk deer in Scotland and the North usually traipsed across the Channel for cures at the numerous Continental spas, leaving Britain once more to the sporting set.

Further Reading:
The Social Calendar by Anna Sproule
Ladies of the Manor by Pamela Horn
The English Country House Party by Phyllida Barstow

11 replies on “The London Season”