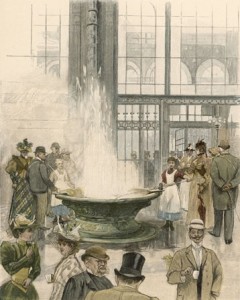 Up to the mid-nineteenth century the great leisure center of Europe were the German spas. However, when gambling was outlawed, the pendulum swung towards France and Monaco. The greater ease and inexpensive fares offered by both railways and ocean liners enabled society to hare off to Monte for a bit of gambling, to a tiger hunt in Bengal, or hunting on Baron de Hirsch’s estate in Austria. By the end of the London season, most, if not all, of society, having eaten its way through autumn to August required a place where their system could recuperate.

That notorious gourmand, King Edward, when Prince of Wales, not only encouraged the trend for rich, heavy sauces, multiple courses a la russe, and snacking at all times of day and night–washing it all down with copious amounts of wines and champagne (pink was his favorite)–but also the late-summer jaunts to Baden-Baden (pictured above), Marienbad or Carlsbad, where he and other gourmands were placed on a strict regime that combined diet, exercise and the taking of the waters.

The German spas were also a great place for the person with a slightly sullied reputation to mingle with people they wouldn’t necessarily have been able to meet in Paris, Vienna or London. A young lady of fortune or without fortune viewed Ems, Homburg and Marienbad as the ideal terrain for post-Season husband-hunting. The general atmosphere of “here today, gone tomorrow” encouraged liaisons and friendships otherwise avoided. And even the king wasn’t exempt from the somewhat permissible atmosphere of the spas: ladies of dubious antecedents and reputations regularly propositioned Edward through his equerry Sir Fredrick Ponsonby, who tells in his memoirs of a particularly aggressive lady of easy virtue who, when the King turned her down, then offered herself to him!

After Christmas, the travelers would return to the Continent and throw themselves into the South of France Season, which lasted until mid-May. The Riviera stretched from Marseilles to Monte Carlo, and many books extolled the sunshine, dry warmth and gorgeous scenery as an ideal setting for those suffering poor health. While consumptives and hypochondriacs toddled to Cannes and Nice, those with money to burn (and sometimes with pockets to let) dashed to Monte Carlo and its world-famous casino where the ordinary gambling unit was a mille, worth about 40 pounds. In its season, Monte Carlo attracted the super-rich Americans traveling over in yachts, widows both wealthy and on the prowl, and so many Russian princes and Grand Dukes that it seemed the court of St. Petersburg was replicated many miles (or versts to the Russians) away. A few, such as Alice Keppel, Edward’s maitresse-en-tete, preferred Biarritz, a small French city founded by Empress Eugenie, where the English influence was very strong.

Towards the end of the 19th century a few sporting enthusiasts discovered skiing in Scandinavia and brought it south, causing the Alpine resorts of Wengen, Gstaad, Davos and Adelboden–all located in Switzerland–to take off. By the mid-1900s, winter sports became so popular they were to have become incorporated into the aborted 1916 Olympics. But all good things must come to an end. After the hustle and bustle of Monte Carlo and the German spas, society returned to England with lighter pockets and trimmer waistlines, only to begin the social round again, sparking a continuous cycle of gluttony and excess counteracted with a period of diet and restriction.

4 replies on “The Season Abroad”