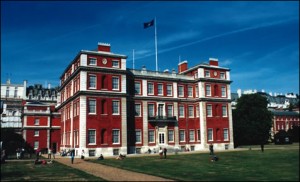 Upon his marriage to Princess Alexandra of Denmark in 1863, the Prince of Wales was given the leases of Sandringham House and Marlborough House, and an annual income of £100,000. Up until then, the twenty-two year old Bertie was treated like a schoolboy, and the sudden banishment of tutors and governesses, and the fleshly delights of the marriage bed with a beautiful princess more than went to his head. He was now free from his strict upbringing and his mother’s gimlet eye, and the Prince and Princess of Wales quickly amassed a glittering, fast set of friends relieved to find the heir apparent anxious to live the gay social whirl of balls, dinners, races, and parties abhorred by the Queen. 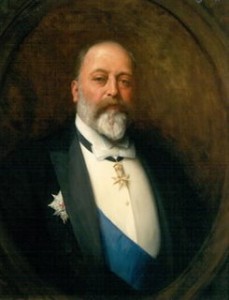 This set was dubbed the “Marlborough House Set,” after Bertie’s London residence, which no doubt shook fear in the hearts of Queen Victoria and her stuffy retainers, whose long memories conjured the raucous, vulgar “Carlton House Set” of the debauched George IV. Nonetheless, from the start, Bertie’s friends were going to be different. As the future King of England and Wales, Scotland and Ireland, and Emperor of India, etc, he saw himself a head above everyone by birth, and as such, welcomed all manners of people into his inner circle so long as they were amusing, well-mannered, sporting, and wealthy. Most shocking was his embrace of the wealthy Anglo-Jewish families who had never before been welcomed into “Gentile” homes. The “Jewish element” was soon accompanied by the scores of wealthy American eager for titles and social cache—and they got it, for the Prince of Wales loathed boredom, and the coup of hosting His Royal Highness at a house party, or obtaining his presence at a daughter’s debut ball far outweighed the costs of entertaining him. 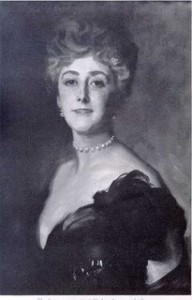 Lord Esher, Sir Ernest Cassell, the 8th Duke of Devonshire, Lord Charles Beresford, Portuguese Ambassador Marquis de Soveral and Baron de Hirsch formed Bertie’s inner circle of friends, and among the ladies, the Duchess of Manchester (later, wife of 8th Devonshire), Lady Randolph Churchill, the Marchioness of Londonderry, and the Countess of Warwick reigned supreme. Other close friends included Christopher Sykes, Harry Chaplin, Consuelo, Lady Mandeville (wife of 8th Duke of Manchester), the Sassoons, the Rothschilds, and the Earl of Lonsdale, as well as a considerable number of Continental aristocrats, such as the Bohemian Count Charles Kinsky and the Italian Duchess of Sermoneta. Bertie was far from an intellectual, but posssessed with an innate charm and skill as a conversationalist, he managed to form close relationships with Arthur Balfour and Lord Curzon.

Predictably, Bertie’s taste for the more raffish members of the aristocracy caused him much trouble in the coming years. Queen Victoria minced no words about her feelings for his associates, and regularly sent letters to his residences to express her disapproval. One of the first scandals that rocked the Marlborough House Set was the Mordaunt divorce case. Having given birth to a blind daughter, Harriett, Lady Mordaunt was convinced the girl’s affliction was retribution for her sin of adultery and in contrition she confessed all to her husband:

“Charlie,” she sobbed, “I have been very wicked. I have done very wrong. With Lord Cole, Sir Frederic Johnstone, and the Prince of Wales and with others, often and in open day.”

Sir Charles Mordaunt immediately filed for divorce, and Lady Mordaunt’s affairs were splashed all over the papers, the scandal intensifying when flirtatious letters from the Prince of Wales to the baronet’s wife were unearthed as evidence, and Lady Mordaunt’s lawyers called him up as witness to her defense. The presence of a member of the Royal family in court rocked the nation and questions arose concerning the propriety of the heir to the throne sending letters to a married woman and paying her calls during her husband’s absence. Thankfully, Bertie acquitted himself correctly and Sir Charles Mordaunt’s lawyers were unable to find fault with his defense. Lady Mordaunt was proven insane and disgraced and divorced at 28, Harriett spent the rest of her days in an asylum and died in 1906.

The Court breathed a sigh of relief over the Prince’s first brush with infamy, but unfortunately for him, it was not to be his last. Just six years later, he was entangled in another divorce case when Lord Randolph Churchill’s brother, the Marquess of Blandford eloped with Edith, Lady Aylesbury whilst her husband was in India with the Prince of Wales. Letters reached Lord Aylesbury about his wife’s affair, and his early departure infuriated the Prince of Wales.

Lord Randolph was infuriated by what he saw as Bertie’s hypocrisy and threatened to have letters between Bertie and Edith published in the newspapers. This was tantamount to blackmail, and Bertie was so angry, he challenged Lord Randolph to a duel. Matters reached the stage of declaring seconds, though Lord Randolph dispatched his to the Prince’s with the message that he would duel anyone but his future Sovereign. That matter was dropped, but not the rift between Lord Randolph and the Prince of Wales, much to the acute distress of Lady Randolph Churchill, who had prized her relationship with Bertie. Lord Randolph’s father, the 7th Duke of Marlborough, was pressed to accept the post of Viceroy of Ireland, and his disgraced son, daughter-in-law, and two year old Winston were exiled to Ireland for six years. 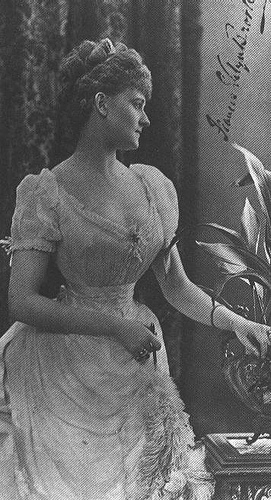 The next scandal was a trifle more discreet and gained Bertie his reigning maîtresse-en-tête for most of the 1890s, the vivacious Daisy, Lady Brooke, later Countess of Warwick. Daisy was conducting a torrid affair with Lord Charles Beresford, and was outraged to discover Lady Charles Beresford was pregnant by her husband! The impetuous Daisy dispatched a violent letter to her faithless lover, but it was intercepted by Lady Charles who read it contents with dawning horror. Others who read it, including Charles’s brother, Lord Marcus Beresford agreed it “ought to have never seen the light of day.” Lady Charles promptly handed over the letter to George Lewis, society’s discreet solicitor, for safe-keeping, but the Prince of Wales was now involved in the matter, roped in by Daisy’s pretty tears.

Bertie hoped to convince Lady Charles to give up the letter for its destruction, but she gave Daisy an ultimatum: stay away from London that season and the letter would be returned. Daisy refused this edict, and the Prince of Wales made the situation worse by hinting to Lady Charles that the position she and her husband held in society would be endangered. This stoked the ire of Lord Charles, who was furious enough to push the Prince of Wales against a sofa. Bertie forgave Lord Charles for his actions, but by then he was more preoccupied with his new lady love, the beauteous and delectable Daisy, whose defection and subsequent scandal placed a definite strain on the friendship of the two men.

Perhaps Bertie could have avoided all, or at least most of these scandals had he not set a precedent within his set for open marriages. He was in love with Alexandra when they wed, and he certainly found her beautiful, but after the first decade of marriage, his eye began to rove and the bored prince craved the stimulation of conquest. Prostitutes, courtesans and actresses were the typical women in which men of his ilk indulged, but Bertie found it infinitely more exciting to discover many aristocratic women were not the cold, “lie back and think of England” type. His first important relationship, with the delectable Mrs. Edward Langtry, bore this out. Affairs with women of his social circle were much easier to manage than setting up a household for a flower seller or braving an unregulated brothel, and gentlemen of the Marlborough House Set were more than happy to pursue the pretty blonde marchioness or the tall, stately baronet’s wife. All of this wife and husband swapping had firm, but necessary rules: unmarried and newlywed women were out, married women were advised to fill the nursery with legitimate children before the offspring of their liaisons entered the wing ( and one must never comment upon a likeness), and the Cardinal Rule was “Thou Shall Not Be Found Out.” 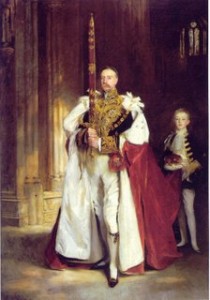 Woe betide anyone who broke this last rule by causing a scene when and if they discovered their spouse’s extramarital affair. The new rules for marriage led frequently to heartache and distress. For example, despite indulging in affairs of her own, Lady Randolph was wounded by her husband’s open infatuation with Gladys, Lady de Grey, and when in the 1870s, Lady Henry Somerset found her husband in bed with a young man and had the nerve to speak about it, she was banished from society after her public divorce and only returned to Court in 1902.

The Marchioness of Londonderry also discovered the harshness of these social rules. She had the misfortune of having her letters to her lover Harry Cust discovered by her rival for his affections, Gladys de Grey. Gladys read the letters aloud to friends, mocking the marchioness’s fevered words and her abhorrence for her husband. Having obtained much humor from these letters, Gladys decided to wrap the letters in a bow and send them to the Marquess. Lord Londonderry read the letters, carefully tied the bow back around the envelopes and set them on his wife’s boudoir table with a note inscribed “henceforth, we do not speak“.

And they didn’t. Some years later, when the Marquess lay on his deathbed, he refused his wife’s note begging to see him. A few years after that, as Gladys, now Marchioness of Ripon, lay on her deathbed, she sent the widowed marchioness a note asking forgiveness. Lady Londonderry sent a curt response: “No.”

By the time of Bertie’s ascension to the throne as King Edward VII, the passions of the Marlborough House Set had settled down somewhat. Appetites–for both food and flesh–remained the same, and scandalous pastimes like gambling were still thrilling, but public scrapes were a thing of the past. Perhaps the rise of the tabloid made all news so sensational, people didn’t have time to focus on the doings of the King and his circle, or perhaps the swift social and technological changes made royal scandals rather ho-hum to contemplate. Or perhaps the Marlborough House Set was just old (Bertie did become King at 60). Whatever the case, Bertie’s influence changed the tenets of society, and both his pursuit of pleasure and acceptance of amusing people of whatever background (so long as they were wealthy, naturally), made the Edwardian era Edwardian!

1 thought on “The Many Scandals of the Marlborough House Set”