Note from Evangeline: I’ve been a fan of Melody’s review blog, Redeeming Qualities, for a while. If you recall an earlier vintage review I wrote for this site, owning a Sony Reader opened the doors to a lot of forgotten fiction published during the Edwardian period. This is where Melody’s blog comes in: not only has she increased my digital To Be Read (TBR) pile to precarious levels, but her reviews are full of gentle snark and historical tidbits that makes tracking down old books fun! When I cast about for someone to contribute content to Edwardian Promenade, she was the first person to pop in my head, and with much ado, here is Melody’s first vintage review: 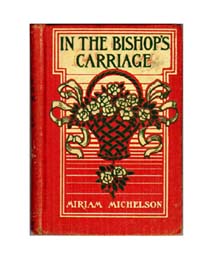 In the Bishop’s Carriage is completely delightful. There are other things worth knowing about it, I suppose. That it was one of the top selling books of 1904, for instance, or that its author, Miriam Michelson, was the Californian daughter of Polish immigrants, and the brother of a Nobel Prize winner. Really, though, the delightfulness is the main thing

Actually, this was probably the wrong book to choose for my first review at Edwardian Promenade. I love it too much; all I want to do is gush.

For starters, there’s Nance Olden, the narrator. She’s a teenage orphan who apparently spends most of her time running around with her boyfriend, Tom Dorgan, and stealing things. We don’t see much of Tom, aside from a couple of scenes where he’s holding people at gunpoint, but from what we do get, he seems to be handsome, charming, and completely unscrupulous. Tom is, pretty clearly, not good for Nance, but fortunately there are a lot of people around who are.

There’s the Bishop, for starters. Nance ends up in the titular carriage while escaping from a suspicious policeman. She’s already sort of accidentally stolen a red coat with a chinchilla collar and a matching hat, and she manages to convince the bishop that she’s gotten separated from her father somehow (and then, completely brilliantly, that she’s a college girl in the middle of a nervous breakdown). The Bishop, on his part, tells her he wishes that she was his daughter, and basically wins Nance’s affection forever.

Then there’s Latimer, the wealthy invalid who helps Nance escape from the scrape she gets into after she re-encounters the girl whose coat she stole, and Maggie, the friend Nance lives with after Tom…ceases to be around. And, most importantly, there’s Fred Obermuller, the coolest stout, bespectacled, fictional theatrical producer ever. The thing I always used to say about this book, when I was trying to describe it to people, was that, of all the books I’ve read from eras when stoutness was considered attractive, this was the only one that ever really convinced me.

And that’s just one of many ways in which Fred Obermuller is awesome. He’s the person who gives Nance a chance at a new life, stands by her when she’s in trouble, helps dispose of Tom, and eventually (of course) marries her. But — and this is very important — he’s still not as awesome as Nance herself, who is strong, intelligent, talented and emotionally self-aware. Fred offers her a job, but Nance makes a name and a career for herself and does at least as much for him as he’s done for her.

I think that the main thing that makes this book so great — and maybe one of the reasons it was a bestseller when it came out — is that Nance is always becoming more throughout the book. Each adventure has higher stakes than the previous one, and each one sees Nance becoming stronger and more independent. In so many Edwardian Era novels, the resolution of the romance plot leads to the heroine losing her agency, her personality, and anything else that made her relationship with the male lead interesting, but that doesn’t happen in In the Bishop’s Carriage–not even a  little bit. Miriam Michelson should have taught a class or something.

In the end, though, this book doesn’t even need a satisfying ending to be fun, because it’s fun all the way through. There’s humor, and heartwarming bits, and characters who genuinely seem to like each other, and really, what more could you want?

Read In the Bishop’s Carriage at Project Gutenberg.

Written By
Melody B
More from Melody B
Mary Roberts Rinehart wrote all sorts of different things — the small...
Read More

3 replies on “Vintage Review: In the Bishop’s Carriage”