So, apparently the Williamsons weren’t the only people who wrote about men disguising themselves as chauffeurs — Lawrence Perry did it too. Prince or Chauffeur? sounds like a Williamson-ish title too. And that’s probably where the Willliamson comparisons should stop, because, while it isn’t really up to their standard, it is a perfectly satisfactory book with some interesting touches. 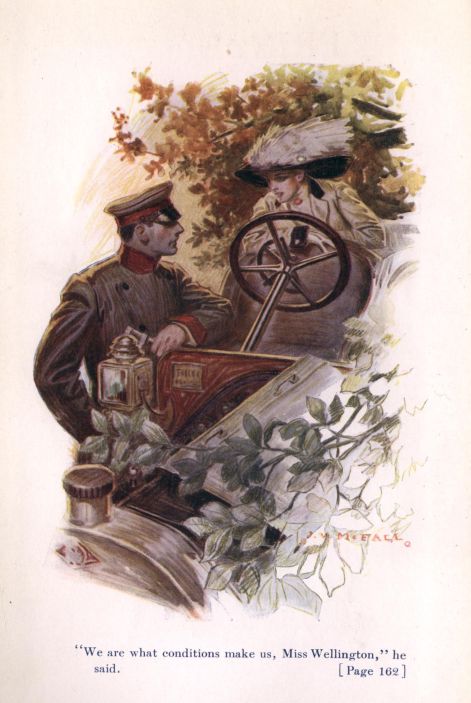 It takes place at Newport, which is a plus in itself — sometimes I feel like all novels about wealthy people in the early 20th century should be set there — but unlike other novels of Newport that I’ve read, this one isn’t just there for the fabulously rich people: the naval base is just as important. Our heroine, Anne Wellington, is there because she’s fabulously rich, but our hero, Jack Armitage, is there because he’s in the process of inventing a new kind of torpedo.

Anne and Armitage like each other immediately, so there wouldn’t be much in the way of conflict if it weren’t for Prince Koltsoff, the third corner of the love triangle and the lynchpin of the spy plot, which involves a stolen part from Armitage’s torpedo. Even that doesn’t do much to add tension, though. I mean, having Koltsoff give Anne the stolen part to hide does give us a clearer idea of how slimy he is, but it also pretty effectively disposes of any mystery there might have been.

The characters are nice enough — I liked Anne’s mother, who has schemed her way to social supremacy, and Sara Van Valkenberg, Anne’s friend who turns out to have grown up with Jack, much to the detriment of his chauffeur disguise — but the book really does suffer from the lack of tension. Prince Koltsoff does his best, but he’s not that interesting. What is interesting is Anne’s attraction to him, which seems to be almost entirely physical — not something you usually see in books from this era. Other cool little bits include the mock naval battle Armitage shows to Anne and Sara, and the Wellington family dynamic, which seemed really true to life, barring the bit where they’re insanely wealthy. And there are other things to like — lots of them — but there isn’t really anything to love.

Prince or Chauffeur? at Project Gutenberg

Written By
Melody B
More from Melody B
Mary Roberts Rinehart wrote all sorts of different things — the small...
Read More

One reply on “Vintage Review: Prince or Chauffeur?”