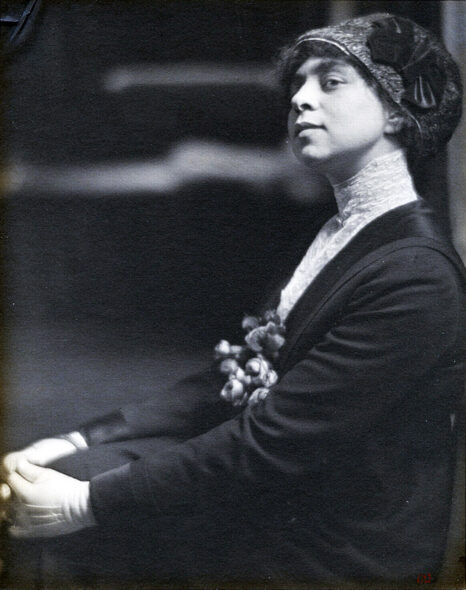 Belle da Costa Greene summed up her individuality and allure in one phrase: “Just because I am a librarian doesn’t mean I have to dress like one.” The library profession was in its infancy, but this attractive and vivacious woman happened to be the curator of a library owned by one of the world’s most powerful men–J.P. Morgan. When Morgan, who had built up an impressive collection of art, illuminated manuscripts, rare books, and furniture, commissioned Charles McKim to build a library, his nephew Junius, then a student at Princeton, introduced him to Belle, who was working at the university’s library. Her particular specialty was both illuminated manuscripts and getting Morgan’s acquisitions past customs, and from 1905 until his death in 1913, she was his right hand in the construction of a library collection which continues to astonish visitors and scholars. In Belle, Morgan no doubt found his counterpart: she was both witty and remarkably self-confident, and unswervingly loyal to him, reading Dickens and the Bible to him, and even attending an all-night library session with him during the Panic of 1907.

However, Belle’s story didn’t end there. Though her profession and association with J.P. Morgan lent her stature in Gilded Age society, it was her secret which pushed Belle into posterity. For she was not Belle da Costa Greene, but Belle Marion Greener, the daughter of Richard T. Greener, the first black student and graduate of Harvard University, and Genevieve Ida Fleet. Sometime after her parents’ separation, Genevieve took the surname of Van Vliet and moved her children to New York where they passed as white. Belle, though very light-skinned with green eyes, dropped “Marion” for “da Costa,” claiming a Portuguese ancestor should anyone question her racial make-up. She then set about reconstructing her past, claiming a degree from the Pratt Institute, among other credentials, before taking a position in Princeton University’s library and then, of course, with J.P. Morgan.

Belle had virtual carte blanche to purchase works of art and priceless objects of which she felt Morgan would approve, purchases which required frequent visits to Europe. There she dazzled the more Bohemian elements of society with her striking gowns and her exotic looks. She also clashed with the male-dominated art world, possessing an intelligence and intuition which allowed her to steal away wonderful finds from beneath the noses of her competitors. She never married (when a lumber magnate proposed, she cabled “all proposals shall be considered alphabetically after my fiftieth birthday”), but she did conduct torrid affairs, the most lasting with Bernard Berenson, a preeminent art critic with an expertise in the Renaissance, who himself masqueraded as “white” (born as Bernhard Valvrojenski) during this time of ethnic/racial conflict.

This is not to say that Belle’s ambiguous appearance and choice to choose her racial classification was wholeheartedly accepted. Morgan’s art rival Isabella Stewart Gardner, was known to have hinted about Belle’s race in her letters to friends, and artist Marcel Duchamp is said to have created art under his pseudonym “Rrose Sélavy” to poke at her secret. After Morgan’s death in 1913, he willed her $50,000 (a considerable sum for 1913) and she retained her position at the Morgan Library until her retirement in 1948. When Belle died two years later, at the age of 67, she burned all of her papers. Despite the limitations placed on those of African descent, Belle was an enigma and an anomaly not simply because of her position with J.P. Morgan, but because of her own savvy and determination to create her own life outside of societal color lines, gender lines, and sexual lines.