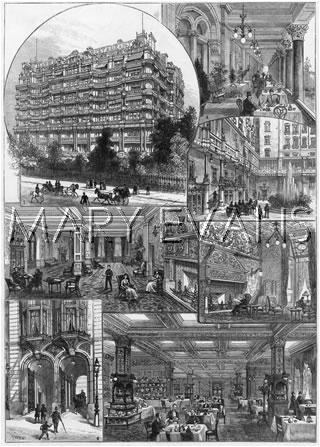 After nearly three years, and at a cost of £220 million, the Savoy Hotel has reopened to much fanfare. The hotel and its equally famous restaurants, are over one hundred years old, and played a large part in the popularity of restaurant dining in Britain. By the turn of the century it seemed “scarcely credible that until the Savoy Restaurant was opened, there was no place where society could sup after the play; not a single restaurant in all London where a man could take his wife or daughter.” Supper at the Savoy became an institution amongst smart society, with late-night suppers, luncheons on the terrace over-looking the Embankment, and even afternoon tea de rigueur whilst in London (and even more shocking, Sunday dinner at the Savoy!). The Savoy quickly became a fashionable location for large dinners, balls and cotillions, which in previous generations would have been unheard of for aristocratic gatherings.

The actual hotel was luxurious and elegant, boasting of modern amenities such as “giant lifts” or “ascending rooms” manufactured by an American company, electric light, hot and cold running water, and speaking tubes for room service. The hotel was designed not for ordinary rooms, but for dozens and dozens of suites, each with its own private sitting-room or rooms, one or more bedrooms, bathrooms, lavatories, etc. The famous courtyard through which guests entered in their carriages or motorcars, was 6,000 square feet, and filled with palms and flowers, and a splashing fountain. On the Courtyard level were the billiard rooms, a ballroom for private theatricals, hair-dressing saloons, and ticket offices for all manner of tickets (to New York by ocean liner, or to a theater, et al), leaving guests with nothing to do but lift a finger for service.

The Restaurant, whose kitchens were guided by the exquisite hand of August Escoffier until 1897, served upwards of 250 dinners a day, a similar number of “little suppers.” It was in the Savoy’s kitchens where Escoffier invented such dishes as Pêche Melba for Australian soprano Nellie Melba, poularde Derby (roast chicken with rice, truffles, and foie gras stuffing, garnished with truffles and foie gras), and Tournedos Rossini (tender slices of the heart of the fillet of beef, topped by foie gras and truffles) for the Italian composer, to name a few of his culinary creations. 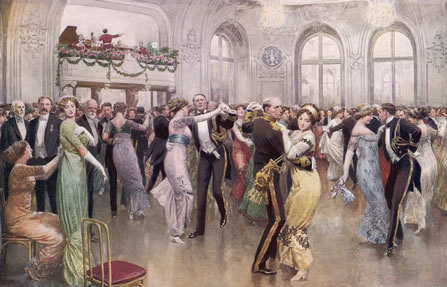 Besides extraordinary cuisine, the restaurant–paneled in mahogany, with golden frieze, and a gold and red ceiling–witnessed many famous diners and equally infamous dinner parties, the most unique being the Gondola dinner hosted by American millionaire George A. Kessler. At Kessler’s command, “the central courtyard was flooded to a depth of four feet and scenery erected around the walls, costumed staff and guests recreated Venice, and the two dozen guests dined in an enormous gondola. After dinner, Enrico Caruso sang, and a baby elephant brought in a five foot birthday cake.”

Lt. Colonel Nathaniel Newnham-Davis, military historian, sportsman, and gastronome, chronicled his dining experiences in London in two books (one published in 1901, the other in 1914), where the Savoy always came up trumps. A dinner for two in 1901, consisting of two couverts, 1s. ; bortsch, 3s. ; sole savoy, 6s. ; mousse jambon, 6s. ; poulet polonaise, 8s. ; salade, 2s. ; fois gras, 6s. ; asperges verts, 7s. 6d. ; pêches glacées vanille, 7s. ; one bottle of champagne 133, 15s. ; cafe, 2s. ; liqueurs, 2s. came to a total of £3.5s.6d! With such delicious fare, and such elegant surroundings, it was no question as to why many chose the Savoy not only for dining and trips to London, but even living in suites for years!

4 thoughts on “The Savoy”