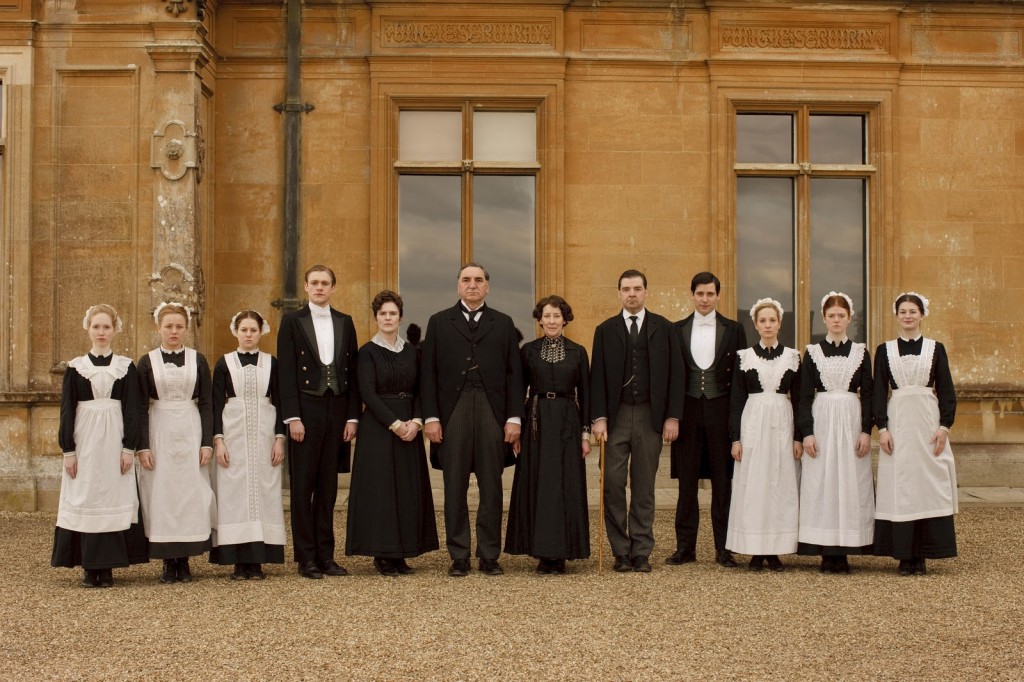 Edwardians of means and/or status could not function without servants. The basics of everyday life–heating, lighting, cooking, cleaning, and washing–were all incredibly labor intensive, and the presence of housemaids, parlourmaids, cooks, scullery maids, footmen, butlers, etc were also a status symbol, for they represented a particular level of income. There was no shortage of prospective servants, with the 1901 census showing that a little over two million women out of the total British population of thirty-seven million were employed in domestic service, and the 1911 census showing an increase to 2.1 million servants out of a population of forty-one million. Compared with factory workers and farmers, whose wages were less than forty shillings (from which 2/3rds were spent on food), domestic servants, who were provided with board and lodging, did better on the whole (the usual allowance of food for each servant per week was 1/2 lb. of butter, 1/4 lb. of tea, 1 lb. of loaf sugar, 1 lb. of cheese, and a daily pint of beer. There was no restriction as to bread, but many ruled that all bread must be a day old before it was eaten.). 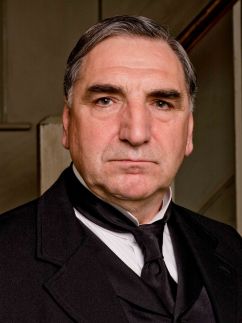 Jim Carter is Mr. Carson. The butler is the senior servant in the household (unless there is a groom of the chambers, who lived in comfortable married quarters with servants of his own, kept the accounts, and was responsible for the overall management including the hiring and dismissal of domestic staff), who kept charge of the wine cellar, the serving of meals, the silver, and the general arrangements for the reception of guests. He sees to the fires in the sitting-rooms, attends to his employer’s literary needs, so far as newspapers are concerned, and acts as valet to his master if no valet is kept. A butler’s average wages range from £50 to £100. Carson’s loyalty to Downton Abbey and its inhabitants is unquestionable, being very proud of the family and of his position. He has a particular fondness for Lady Mary, almost paternal, and holds her welfare and interests dear to his heart. His natural ally is Mrs. Hughes, and their nightly ritual of catching up on the events of the day finds them opening up beyond being the butler and housekeeper of Downton Abbey. 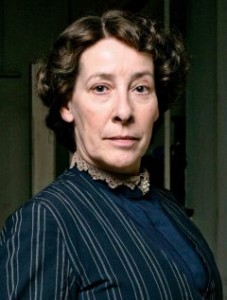 Phyllis Logan is Mrs. Hughes. The housekeeper is the senior female servant, who supervised the women staff (though she knew better than to meddle with either the cook or the nanny), is responsible for the cleaning and the laundry, and presented the menus daily to the mistress of the house for her approval. Her wages averaged £40-70 per year. Though Mrs. Hughes in unmarried, a housekeeper was invariably called “Mrs.” because of the relative power/prestige possessed by a married woman. Though some might see her as cold and austere, she is firm with the staff in order to uphold the status of Downton, though she does have compassion for them. 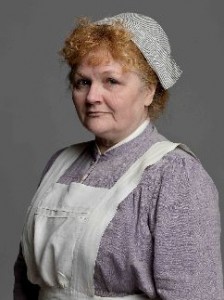 Lesley Nicol is Mrs. Patmore. The cook rules the kitchen and the kitchen- and scullery-maids beneath her. A cook’s wages varied from £18 a year to £500 or more, and their duties in the household were quite as varied as their pay. The dining-room is her special charge, and to this is usually added the care of the hall, the doorsteps, and the kitchen staircase, in addition to her own special realm. Though Mrs. Patmore can be bossy and irritable, it is a given when working in hot and busy kitchens all day long, with the meals of both the family and the servants to be cooked. 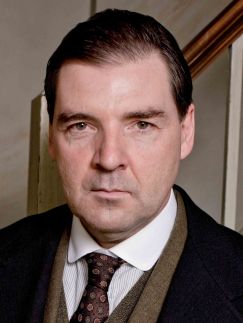 Brendan Coyle is John Bates. With an average wage of £35-50 per year, the valet attended exclusively to the personal accommodation of his master. He waited upon him during all times of dressing and undressing; brushes, folds up his clothes, or places them in readiness for him. He sees to all repairs and puts away clothes in a wardrobe when not in use, making sure to cover them with brown holland or linen wrappers to secure them from dust. Boots and shoes were cleaned by the under-footman, but each morning the valet placed them in the dressing-room for his master. While the housemaid cleaned the grate, lit the fire, and swept and dusted the room, he prepared the washing-table, arranged the shaving apparatus, and laid his master’s clothing out for the day. Mr. Bates was the Earl’s batman in the Boer War, and his arrival at Downton causes all types of disturbances, mostly because Thomas, the head footman, expected to become the Earl of Grantham’s new valet. Mr. Bates’ lameness doesn’t help matters either, but he finds friendship with Anna, the head housemaid, and Mrs. Hughes. 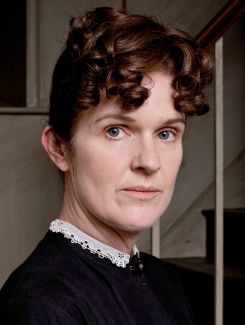 Siobhan Finneran is Miss O’Brien. As lady’s maid to the Countess of Grantham, O’Brien’s sole responsibility is to her mistress. Her duties are solely to care for the wardrobe of her mistress, to assist her at her toilette, to draw her bath, to lay out her clothes and keep her room tidy. Excellent sewing skills are a must, for the lady’s maid repaired her mistress’s clothing and hats, and was expected to smarten her attire when trips to the local seamstress or a fashionable dressmaker was either too expensive or too far away. A lady’s maid also received her mistress’s cast-offs, which, if sold to rag-pickers, could be a lucrative bonus to her annual wages of £20-30. Despite this rather cushy position, O’Brien is narrow-minded and bitter, and is Thomas’s co-conspirator in the grasping footman’s machinations. 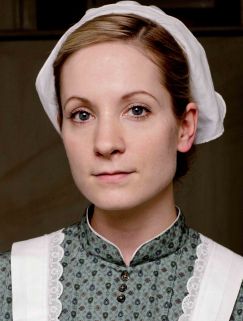 Joanne Froggatt is Anna. The head housemaid has charge of the linen and does the bedrooms of the lady and the gentleman of the house and a few of the spare rooms. Anna also doubles as the lady’s maid of the daughters of the house. Though only a housemaid, Anna is considered the go-between for the younger servants and the senior servants, and clashes a bit with O’Brien. A housemaid’s wages range from £15 to £30; an under-housemaid seldom exceeded £20, though sometimes where three or four are kept the second housemaid is paid highly, the wages of the first being in proportion. 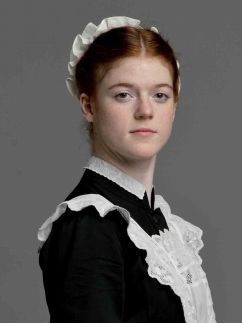 Rose Leslie is Gwen. The under-housemaid is secondary to the head housemaid. Her duties are rather similar to the latter, though she lacks the opportunity to possess any real responsibility. As the daughter of a farmer, domestic service was the only position available for Gwen, but she has ambitions to become more than just a servant, and her desires to rise above her lot in life stimulates the burgeoning political awareness of Lady Sybil. 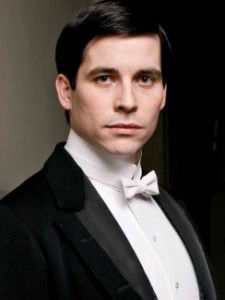 Rob James-Collier is Thomas. The duties of the first footman were as follows: he set the table for each meal, or brought the breakfast trays to the members of the family, other than his master and mistress, and attended to the front door during the morning. He rubbed up the silver daily, cleaning it thoroughly once a week, and kept the dining room in order. He attended to the lamps and lighting of the family fires, and after dinner, carried coffee to the library or drawing-room. When waiting on table, he passed the large dishes and gravies. Thomas is arrogant and has ambitions to be more than a footman. Whether that be valet or butler, who knows, but he looks down upon the entire household at Downton–including the family abovestairs–and isn’t above scheming against anyone for his own personal gain. 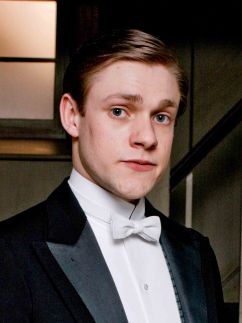 Thomas Howes is William. The second footman alternated with the first footman in attendance on the door. He cleaned the halls, took care of the breakfast and coat-room, served the children’s table–should there be one–and attended to the dusting of high places. He occasionally helped to clean the silver and dishes, and when waiting on the table, he passed the vegetables, salad, and dessert, and after dinner, the cigarettes and cigars to the guests. Thomas’s position at Downton is his first, and though his parents are proud of their only son, the separation is hard on both parties. He is able, if hampered by Thomas’s sneering, at his duties, but he vastly prefers caring for horses than serving in a fine dining room. The wages of footmen depended far more upon height and appearance than efficiency. A second footman of 5’6″ would command £20-22, while one of 5’10” of 6′ would not take under £28 or £30. A short first footman could not expect more than £30, while a tall man could command £32-40. 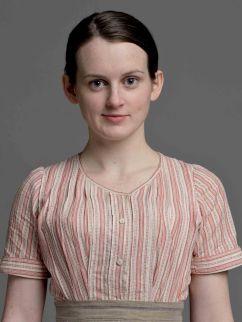 Sophie McShera is Daisy. The lot of a scullery maid was tough. She rose the earliest in the house (sometimes as early as 4 am) to clean the grates and lay the household fires. But mostly, she was expected to wait on the cook, to wash up all pots, pans, dishes, plates, knives, forks, etc, to lay the table for the servants’ meals, to wash vegetables, peel potatoes, and carry coals to the kitchen, and scullery. Her duties also consisted of sweeping the kitchen and scullery, dusting everything before cook came down in the morning, and also charge of the front-door steps, area steps and area. For all of this, her wages ranged from £10-14 per year. Daisy is simple and sweet, which serves her well in the wake of Mrs. Patmore’s blistering tongue. She is enamored of Thomas, which causes trouble for other members of the household when the footman twists her infatuation into his plots. 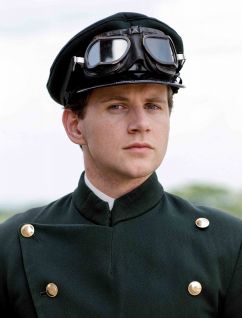 Allen Leech is Branson. The position of chauffeur was relatively new in 1912, which meant his duties–and pay–varied wildly based on the house and employer. He also existed in the in-between world occupied by the governess, since he was not a member of the household, yet he was not a member of the outdoor servants (and those employed in the stables tended to resent the presence of an automobile and the changes it entailed). At best, the chauffeur’s duties consisted of driving the family and of maintaining the upkeep of the motorcar, and with board and lodgings included, his wages ranged from a lowly £10 to a very high £250, if he were very experienced. When Lord Grantham’s old chauffeur retires, the young and invigorating Branson is hired. An Irishman with radical political leanings, he nonetheless finds much to admire in the Earl, but tests his employer’s geniality when Lady Sybil enthusiasm in politics leads him on a merry chase.