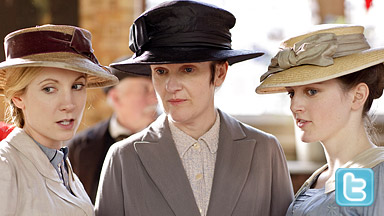 You’re welcomed whenever you’re watching, but from 9-10:30pm Eastern time, PBS and Masterpiece insiders — as well as moderators from Austenprose and Edwardian Promenade — will be tweeting too.

Tag your posts with the hashtag #DowntonPBS and then visit us on TweetGrid, or use your own favorite aggregator.

WHAT: PBS and Masterpiece are hosting a live Twitter event (#DowntonPBS)

WHERE: Join us using our custom TweetGrid (Use hashtag #DowntonPBS).

Other Places to Visit Before the Premiere: