May 4, 1893, was an eventful day, for on that morning the public, opening its papers over the breakfast table, was delighted to read the following official announcement—

“Her Majesty received this (Wednesday) evening the news of the betrothal of her beloved grandson, the Duke of York, to Princess Victoria Mary of Teck, to which union the Queen has gladly given her consent.”

Coincidentally enough, this was the second marriage of a Duke of York to an English subject, since Mary (known as May within the family), the daughter of Prince Francis, Duke of Teck, and Princess Mary Adelaide of Cambridge, was a relation of Queen Victoria’s, and was born in Kensington Palace. However, May’s parents were notoriously poor and between the years 1883 and 1885, they lived abroad in order to economize. Upon their return to England, The Duke and Duchess of Teck and their four children, of which May was the eldest and only girl, took up residence at White Lodge, in Richmond Park, where May passed the time as her mother’s social secretary. May grew quite close to Queen Victoria and as she came of age, Her Majesty began to match-make, wanting to settle this intelligent and forthright young woman into a suitable and comfortable marriage. The queen settled on the 27 year old Prince Albert Victor (“Eddy”), Duke of Clarence and Avondale, her eldest grandson by the Prince of Wales and third in line to the throne. Prince Eddy and Princess May announced their engagement in 1891, but six weeks later he was dead of pneumonia.

May’s situation was now rather unsettled and slightly embarrassing, as Queen Victoria–and even the nation–expected the second and surviving son of the Heir Apparent, Prince George, to step up and declare his intentions to marry her. 1892 was spent in mourning, and despite the delicacy of their relationship, George and May grew quite close, though he hesitated to propose, being unsure of May’s feelings. Fortunately, George’s sister Louise cut to the chase, inviting them both for tea in May 1893, and hinting: “‘Now Georgie, don’t you think you ought to take May into the garden to look at the frogs in the pond?’ George proposed beside the pond, and their engagement was officially announced the following day.”

The wedding date was fixed for July 6th of that year and May and her mother prepared her trousseau, they insisted upon the trousseau being of British manufacture. “I am determined,” said the Duchess, “that all the silk shall come from England, all the flannel from Wales, all the tweeds from Scotland, and every yard of lace and poplin from Ireland.” On July 4th, Princess May left White Lodge to take up residence in Buckingham Palace, where apartments had been prepared for heir reception. Two days later, the Royal Procession passed slowly up Constitution Hill and down Piccadilly through the enormous crowd thronging every vantage point along the route to St. James’s Palace, where, in the historic Chapel Royal, the marriage was to take place. 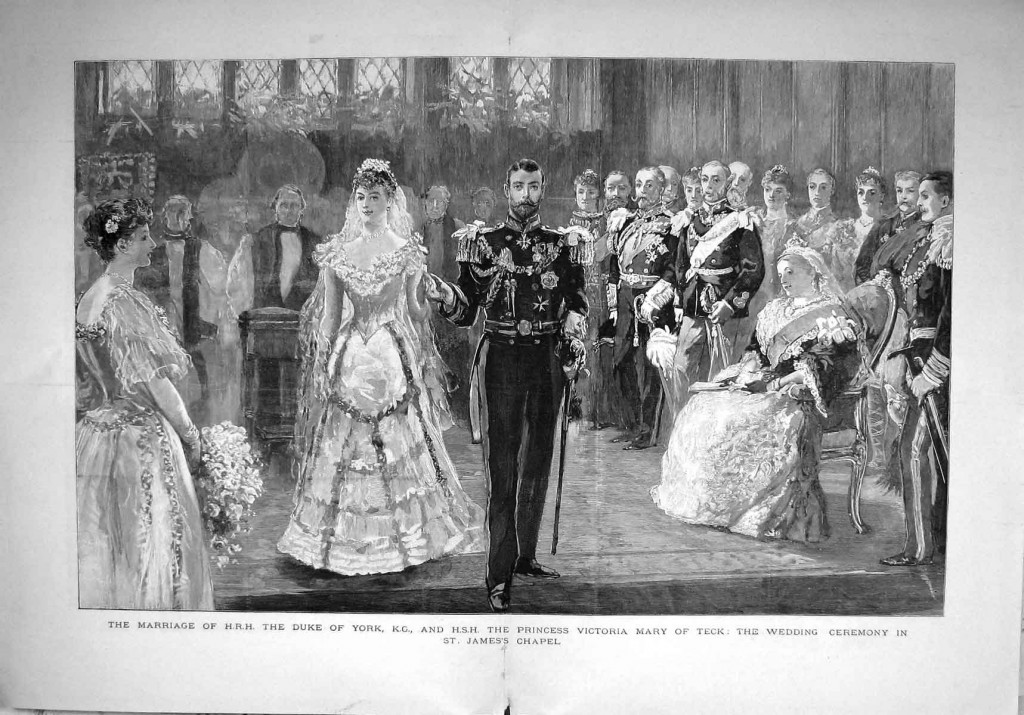 Not since the marriage of Bertie to Alexandra had the public taken such a keen interest in a royal wedding, and Mary’s decision to have a thoroughly English wedding with the aforementioned trousseau and her bridesmaids–the Princesses Victoria and Maud of Wales, Princesses Victoria Melita, Alexandra, and Beatrice of Edinburgh, Princess Victoria of Schleswig-Holstein, Princesses Margaret and Patricia of Connaught, and Princesses Alice and Ena of Battenberg–further endeared her to the public. The actual wedding gown, woven in the looms at Spitalfields, was of silver and white brocade, the design, of roses, shamrock, and thistles, being in silver on a white ground, while the bridal veil was later passed down to May’s daughter, Princess Mary, on her wedding-day to Viscount Lascelles in 1922.

The Archbishop of Canterbury, Dr. Benson, performed the ceremony, and was assisted by the Bishop of London and the Bishop of Rochester. Among those who attended were Tsar Nicholas II, the King and Queen of Denmark, the Grand Duke of Hesse, Prince and Princess Henry of Prussia, and the rest of George and May’s very large extended family. After a wedding breakfast at Buckingham Palace, May changed into her going-away dress of white Irish poplin, and the Royal couple went to spend their honeymoon at York Cottage on the Sandringham estate.

Mr. Ponder unhesitatingly replied that the Duke of York’s wedding with Princess May entailed by far the greatest strain upon him. The principal cake on this occasion was made at Windsor; it was 6ft. 10in. high, and weighed between 2cwt. and 3cwt. This cake…took the Royal confectioner five weeks to make, there being as many as thirty-nine separate pieces of plaster in some of the figure moulds. Altogether, there were at this wedding six immense cakes, on what is known as the “general table,” and in addition to these, Mr. Ponder made sixteen or eighteen smaller cakes for cutting up, each cake averaging about 22lb. Moreover, Messrs. Gunter say that they cut up no fewer than 500 slices of wedding-cake on this occasion, the smallest slice weighing about half a pound, and the largest, a little over 12lb. One of this same firm’s confectioners subsequently attended at the Royal kitchen, and, armed with a saw and a special knife, cut up about 16cwt. of wedding-cake in three days.