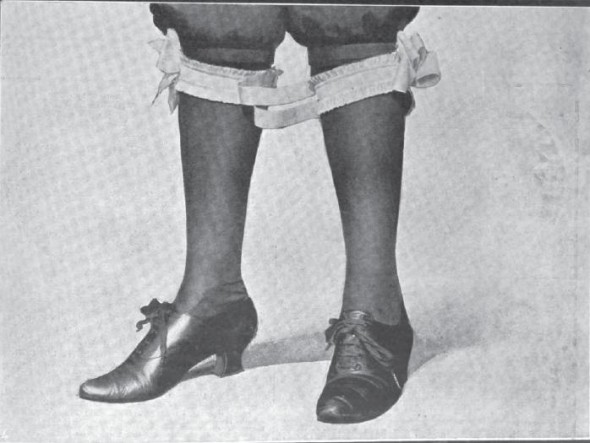 Not content with the harness and trappings of various descriptions with which the fashionable woman must needs burden herself in these foolish fashion days, there has now made its appearance in the fashionable shops that cater to the ultra – advanced fashion whims, what is known as the “hobble-garter.”

The new contrivance follows closely on the heels of the much-discussed hobble-skirt, a freakish idea thrown up by the fashion tide, the lasting qualities of which are a moot question among the fashion authorities of both the Continent and this side of the water. Narrow in its confines, uncomfortable in the wearing, because of its pull-back effect, the women who wear them, so it is reported, have discovered that not only is free locomotion well nigh impossible, but if the wearer even makes use of her natural step when encased in one of these new freak gowns there is danger of a stumble and fall when least expected, and there is the added excitement of practically tearing the skirt asunder if it be fashioned of light material, unless a mincing gait is assumed.

Such a walk is not acquired in a day or even a month, and therefore there has been devised for the hobblers a particularly feminine piece of torture—for it is nothing else—which we herewith illustrate and which for lack of creative ability on the part of its devisers is called the “hobble-garter.”

This new dress adjunct may be best described as consisting of two silken garters fastened below the knees with bejewelled clasps (they are not cheap articles) and ornamented with bows of the same shade as the elastic and ribbon used. These are in turn connected by the use of a strap of elastic webbing of the same color, not over a foot in length. It can be readily seen that so equipped the danger of tripping, missteps, or of damaging the gown is minimized, and all this in detriment to the natural gait which is entirely lost by its use. Silly fashions have come and gone, but it remains for the fashions of the fall of 1910 to develop this latest freak—the “hobble-garter.” – Notions and fancy goods, September 1910

4 replies on “The Hobble Garter”