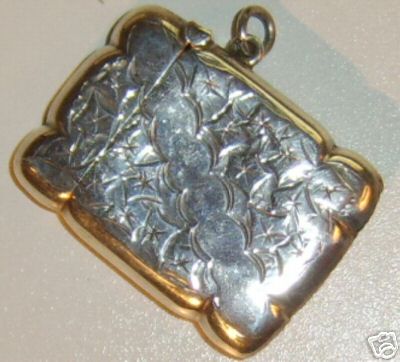 As I browsed the antiques section of ebay, I stumbled upon a number of listings for small, rectangular silver items called “vesta cases”. This unknown item, apparently quite popular in Victorian/Edwardian eras, made me curious and I immediately went on a hunt for more information.

These pocket-sized cases for carrying matches took their name from ‘Vesta’, the deity that presided over the domestic focus (hearth) in Ancient Rome. A ‘match’ was the modern representation of Vesta’s symbolic flame and was known as a ‘vesta’ up until the twentieth century when ‘match’ and ‘matchbox holder’ became the favored term. Though they came into use in the 1830s, the explosion of popularity for smoking–with both sexes–found them produced extensively between 1890 and 1920.

The first “friction match” was invented by English chemist John Walker in 1827. He named the matches “congreves,” but the process was patented by Samuel Jones, who then sold them as “lucifers.” Early matches had a number of problems: the flame was unsteady, the odor produced was decidedly unpleasant, and they were reported to ignite explosively. However, these issues didn’t deter the popularity of smoking. Charles Sauria amended the odor by adding white phosphorus, and these new matches had to be kept in an airtight box.

Vesta cases were available in thousands of patterns and types. They could be plain and decorated square, oblong and round 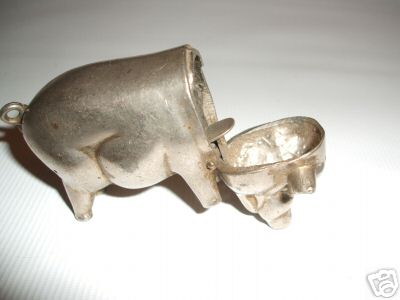 cases, or made of the myriad of novelty shapes created, most popular being vesta cases in the form of Mr. Punch, skulls, musical instruments, boots and shoes, ladies’ legs, brass pigs with hinged heads, etc. They were also made in every conceivable material including pressed brass, pressed tin, gunmetal, nickel silver, ivory,wood of varying types and ceramics. Although the majority were made of these inexpensive materials, some were made of precious metals or enameled. These precious metal cases would often be gilded to protect the metals from the sulfur head of the matches, which would otherwise tarnish them.

Some vesta cases even featured a strike side for lighting the match, and other versions could incorporate a small knife blade. They were carried predominantly by men in a waistcoat pocket or on a ‘double Albert’ chain, which held a pocket watch on one side and a vesta case on the other. When worn by women, they were usually held by a delicate chain or bracelet around their wrist to be discreetly slid in and out of a sleeve.

The decline of the vesta case came during WWI, when soldiers found the petrol lighter lasted longer and was easy to refill–most important when the difference between life and death in the trenches could hinge upon a number of seconds.