This week, we jump ten years in the past, to cover the wedding of Edward VII’s youngest daughter. Unlike eldest sister Louise, who followed in her aunt Louise’s (HRH the Duchess of Argyll) steps by marrying a commoner, and definitely unlike middle sister Toria, who spent her entire life as their mother’s companion, Maud of Wales was one of only six of Queen Victoria’s fourteen granddaughters to actually reign as Queen (the seventh, Princess Margaret of Connaught, died thirty years before her husband came to the throne as Gustaf VI Adolf of Sweden). The rest married princes or grand dukes of equal standing, commoners, noblemen of German descent who were given English peerages during WWI, or remained unmarried. Because of this singular quirk in marital patterns, Maud’s 1896 wedding to her cousin, then known as Prince Carl of Denmark, was merely remarkable because of her being three years older than her betrothed.

Born November 26, 1869, Maud was the third daughter and youngest surviving child of the Prince and Princess of Wales. Another son, Prince Alexander John of Wales, was born two years later, but died prematurely, and surprisingly, this ended Alexandra’s child-bearing obligations at 27 (contrast that with Queen Victoria, whose last child was born when she was 38!). Princess Maud’s childhood was filled with Alexandra’s often smothering love and determination that her children remain wholly dependent upon her. As a result, the five Wales’ children were raised in a highly insular setting, making it difficult–even in their adult life, as Queen Mary learned to her dismay–for outsiders to know them intimately. However, Maud was boisterous and rowdy, earning the nickname “Harry,” after her father’s friend Admiral Sir Henry Keppel, and her pranks were encouraged by her mother. Queen Victoria disapproved of the lax rearing of the Wales children and implemented strict discipline when they visited her, a motion which caused the rebellious young Maud to refuse to see her grandmother on one occasion.

The Royal Family were leaving a London station on a journey to Scotland, and the usual official throng was gathered on the platform. During the formal leave-takings Princess Maud noticed a number of busy reporters, and presently produced a tiny notebook of her own. She scribbled a few words, tore out the leaf, and crumpled it into a ball, which the dropped with apparent unconcern. The ball rolled to the feet of one of the pressmen, who quickly picked it up and unrolled it. The Princess had written: ‘I wish I were a reporter.’

When the bicycle rose in popularity, Maud became the first British princess to ride openly on the scandalous apparatus, declaring to a once more disapproving Queen Victoria, “But grandmother, everyone knows that I have legs!”

Alexandra remained very close to her parents and siblings, and Maud enjoyed the family’s annual visits to Denmark, though she did not hold her fun-loving Danish relatives in high esteem, particularly finding her first cousin Prince Charles of Denmark quite immature. When he impulsively joined the Danish navy at fourteen, a seventeen year old Maud scornfully commented, “I am sure it will be good for him since he used to be so daft.”

In fact, Maud did not think much at all of her cousin Charles, falling deeply in love with cousins Prince Francis (or Frank) of Teck and Grand Duke George of Russia. Her pursuit of Prince Frank was fruitless, as he was both uninterested in romance with a respectable cousin and involved in a number of scrapes which culminated in his exile to India. However, Prince Charles, that “daft” Danish cousin, had been in love with Maud since 1892, and after a number of visits, during which they indulged in their mutual love of bicycling, he took the chance of proposing marriage in 1895.

Maud was surprisingly very happy with the prospect of marrying Charles: “Everything happened very suddenly,” she expressed in a letter to Prince Frank’s brother. To her grandmother she wrote, “I wanted to tell you how happy I am and I hope you approve of my choice.” His main attraction was the unlikelihood of his descending the Danish throne and their ability to lead a quiet life in England. There were some concerns over the match, with some condemning the consanguinity of their relationship, and Charles dealing with his mother’s disappointment, for she had her heart of matching him with Queen Wilhelmina of the Netherlands. Nevertheless, wedding plans were organized quickly, and July 22, 1896, Princess Maud married Prince Charles of Denmark in the private chapel at Buckingham Palace. 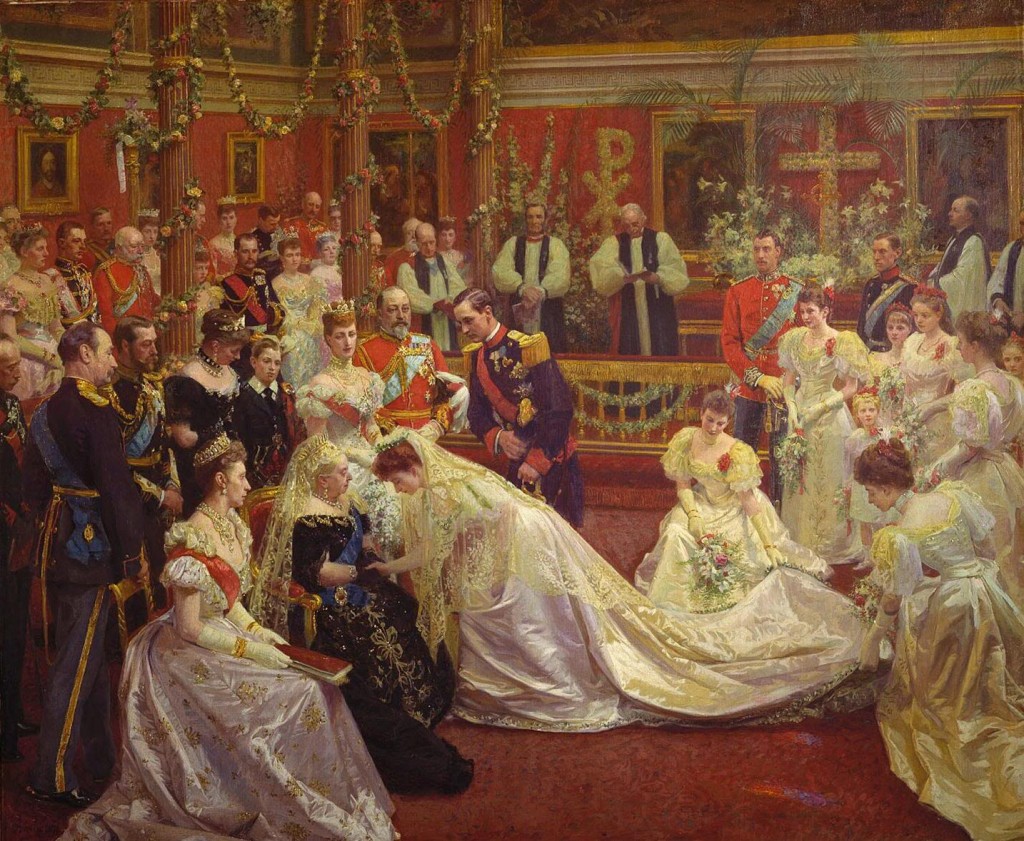 The Kit-Kat offered a look at Maud’s wedding gown…

The wedding gown, made in Spitalfields, is of pure white English satin, with long train cut in one with the skirt, and trimmed in one corner with a full bow of mousseline de soie and orange blossoms; a ruche of chiffon and flowers borders the skirt hem at the front and sides. On the bodice the satin is drawn across the figure to point at left side, under a bow of mousseline de soie and cluster of orange blossoms, finished at the waist with a band of exquisite silver and diamond embroidery. The low square decolletage is trimmed with folds of the same mousseline and trails of orange blossoms, the billowy sleeves being formed of waterfall puffs, with trails of the flowers carried down each puff, and falling on the arm in single bud.

…While The Lady’s Realm waxed poetically over Maud’s trousseaux…

The Queen gave her grand-daughter some exquisitely fine Honiton lace, with which a satin tea-gown in the shot amber and scarlet shades, called ” Sublime,” was trimmed. A “Trianon” dress, in stripes of pale blue and white, was brocaded with tiny rosebuds, and made with a white chiffon fichu, edged with ochre lace, and drawn into a stomacher strapped with narrow black velvet, and finished with old silver and diamond clasps. The bride’s mother had recently visited Russia, and there purchased some wonderful crystal handles and knobs for parasols and sunshades. One was egg-shaped, encrusted with gems, another was long and covered with gold filigree, and a third was a crutch handle of pink coral, round which were entwined two gold snakes with sapphire eyes.

Her wedding gown was designed by Miss Rosalie Whyte, of the Royal Female School of Art in Queen’s Square, and was very simple; but, as Miss Whyte said to an interviewer, “the Royal Family have always appreciated the beauty of simplicity in dress.” The white satin for it was woven in Spitalfields, and, in addition to the orange-blossoms worn by all brides, and the German myrtle always liked by the Queen’s family, there was a mixture of white jessamine in the garniture.

Personally, Princess Maud does not care for lace, but the Princess of Wales ordered some very fine Honiton point and handkerchiefs for her. Lovely Irish poplins, Derwent dress linens from the Cockermouth Mills, the Bradford manufactures, and the Cheviotside tweeds and coatings from Alnwick, were all included. The tailor-built gowns and some useful mantles came from Redfern’s; and Messrs. Scott Adie had many orders, among them being a deep, wide, circular Alaska sealskin cape, lined with old rose broche’, and having a rich silvery chinchilla collar. Princess Maud has a small, pretty foot, and knows it, so all her boots and shoes had pointed toes, narrow “waists,” and high heels. Busuine was responsible for her riding-habits, and Godfrey & Dart for her cycling costumes. A very special present from the Princess of Wales to her youngest daughter was a magnificent circular cape of royal blue velvet, lined, bordered, and with a big collar of the finest Russian sable. This was supplied by Poland & Son, of Oxford Street.

Princess Maud was just a little difficile about her going-away dress, and the story goes that the Princess of Wales was not altogether pleased with her final choice, so she ordered a delicate rose and apricot shot glace’ silk, with a plain skirt and full ruche of Valenciennes at the hem, an embroidered and jetted Figaro jacket with full vest of pinkish mauve chiffon, a waistband of black and rose satin, fastening under rosettes, Valenciennes ruffles at the wrists, and a small cape to match. It was kept a secret from the bride till almost the last, and then she was obliged to acknowledge her mother’s perfect taste, and declared it was the prettiest dress she had.

…And The Puritan took a look at Maud and Charles’ wedding cake.

The wedding cake of the Princess Maud of Wales was particularly charming. It was a labor of love for the Bollands to contrive a new combination of the arms of Denmark and England. Many years before, they had faced the problem in designing similar decorations for the bride’s parents. Apart from this, Princess Maud’s wedding cake had two most charming features: the separate tiers were encircled with white satin ribbon bordered with pearls, trimmed with bridal buds and tied in true lovers’ knots: a triumphant god of love surmounting the whole structure bore aloft a delicate nautilus shell, from which fell festoons of silver bullion and fragile seaweed.

Maud and Charles lived the quiet life she so desired, dividing their time between Denmark and Appleton House on the Sandringham Estate, which her father presented to her as a wedding present. Things changed drastically in 1905, when the Norwegian parliament, Storting, dissolved Norway’s one hundred year-old union with Sweden and voted to offer the throne to Prince Carl. Though Maud was rather disappointed by the move, she greeted her ascension with incredulity: “Behold! I am a Queen!!!” she wrote excitedly to her sister-in-law, May (brother George’s wife). “Who would have thought it! And I am the very last person to be stuck on a throne! I am actually getting accustomed to be called ‘Your Majesty!’ and yet often pinch myself to feel if I am not dreaming!” Fortunately, Maud’s down-to-earthiness fit with the largely democratic atmosphere of Norway, and though she brought a bit of her Englishness with her, she adapted quite well to her new country and people, even becoming a fashion icon now that she moved from beneath her mother’s shadow.