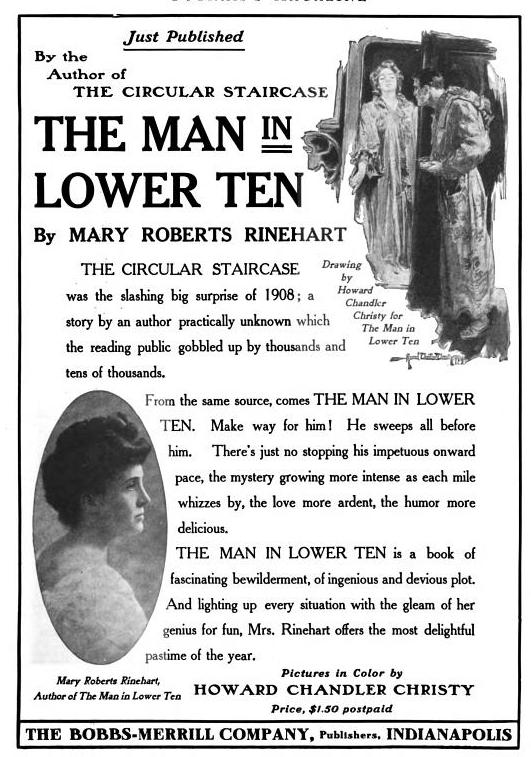 Mary Roberts Rinehart wrote all sorts of different things — the small percentage of her works that I’ve read include mysteries, serious novels, funny novels, funny short stories, a Christmas story, and a memoir, and I mostly loved them all. But it’s her mysteries — and mostly her early mysteries — for which she’s most famous. If you’ve heard of any of her books — well, actually, if you’ve been reading Edwardian Promenade for a while, you’ll remember When a Man Marries, which is a wonderful book. But other than that, the one that gets talked about is The Circular Staircase, her second novel, known as the origin of the “Had-I-But-Known” school of mystery fiction. You know: the kind of book where the narrator is constantly irritating you by cryptic references to events you haven’t yet read about.

Anyway, Rinehart’s mystery novels are, in general, a little inconsistent. Some are very well plotted, and some are all over the place, and The Circular Staircase is a good example of the latter. Rinehart piles on mysterious circumstances; as soon as a clue appears to one part of the mystery, a whole other plotline springs up fully-formed from somewhere else. And it’s very clever because, while theoretically you have enough clues to figure out what’s going on, there’s so much happening that it’s hard to sort out which clue goes to which mystery. It’s also kind of exhausting.

Actually, though, I didn’t mean to talk about The Circular Staircase; this post is supposed to be about The Man in Lower Ten, Rinehart’s first novel, which I think is pretty fantastic. As in The Circular Staircase, you’re given a lot of clues, but in The Man in Lower Ten, they mostly come at the beginning. and instead of the chaos spawning more chaos, it’s slowly put into order. Also, it’s a train murder story — and there’s something about those that always gets me — but not just a train murder story. Actually, it might be the first train murder story — it was published in 1906.

The narrator, Lawrence Blakeley, is a lawyer and a pretty likable guy. He’s on his way home from getting a deposition when he’s the victim of a mix-up on the train: first his sleeping compartment, when he goes to get ready for bed, turns out to be occupied by someone else. Then, when he wakes up in the morning, he’s not in the compartment he thought he went to sleep in and the important papers he was carrying are nowhere to be found. Also, there’s a dead guy in his former compartment, and several signs point to Blakeley as the murderer. He’s about to be arrested when the train crashes, which kills almost everyone on the car (although as the story goes on, other people who were there keep popping up and being like, “oh, by the way, I survived too!”). The only evident survivor when Blakeley wakes up is Alison West, the girl his best friend is hoping to marry. They escape the wreckage together, and by the time Blakeley makes it home we know a) that she’s somehow involved in the mystery, and b) that he’s fallen in love with her. Rinehart is great at developing a romance in the background of a mystery, and I find it particularly enjoyable in this book.

There’s also an entertaining amateur detective, a whole slew of mysterious women, hints of bigamy, and a creepy cat. Rinehart cleverly manages to have the reader know things that the narrator doesn’t and vice versa, which always impresses me. And it’s funny — check out Blakeley’s mental letter to the Pullman Company on the subject of their uncomfortable sleeping compartments: “If they are built to scale, why not take a man of ordinary stature as your unit?” I wrote mentally. “I can not fold together like the traveling cup with which I drink your abominable water.”

I was misled by Wikipedia and read The Circular Staircase first, but if I could somehow introduce myself to Rinehart for the first time again, I’d choose this.

Vintage Reviews: When a Man Marries

The Man in Lower Ten at Project Gutenberg

Written By
Melody B
More from Melody B
Alice Caldwell Hegan Rice’s Mrs. Wiggs of the Cabbage Patch, the second...
Read More

4 replies on “Vintage Review: The Man in Lower Ten”