Lord Loveland Discovers America, by those automobile fiends A.M. and C.N. Williamson, is sort of a sequel to Lady Betty Across the Water — Val (short for Percival, one of the Marquis of Loveland’s many names) is Betty’s cousin, and although he’s said to resemble Betty in many things, I’m pretty sure his massive ego isn’t one of them. But if his ego is large, his bank account is the opposite. Completely aside from the maintenance of the proverbial lifestyle to which he’s become accustomed, it sounds like his ancestral home is just about ready to start coming down around his ears. To Val and his mother, the obvious solution to this problem is a wealthy wife, but much to their surprise — Val’s mother thinks as much of him as he does of himself — even the ugliest heiresses they can find aren’t interested. 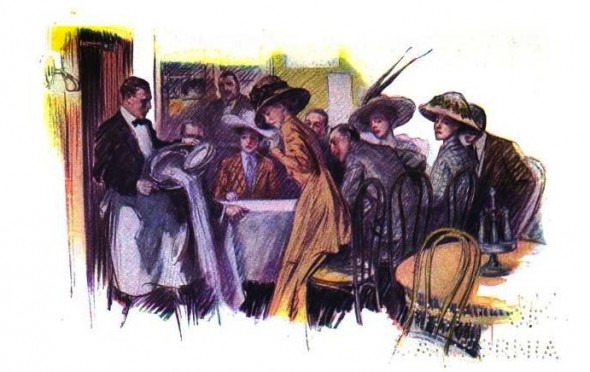 Then they remember Cousin Betty. She went to America and found herself a rich husband, so theoretically Val ought to be able to do something similar. So they gather together as much cash as they can and buy Val a ticket on ship that’s departing soon. Only, for various reasons, he ends up traveling on another, earlier ship, and when he arrives in New York a couple of weeks early, his reception is puzzling. And when I say puzzling, I mean he’s shunned and kicked out of his hotel, for reasons that should be pretty apparent to the reader, but aren’t to Val, who isn’t the sharpest tool in the shed.

To make matters worse, or at least more complicated, Val’s fallen in love on the boat on the way over — and with a completely unsuitable girl. Leslie Dearmer doesn’t pretend to be anything but a writer, and he’s even skeptical of minor heiresses. And anyway, Leslie likes Val, but she definitely doesn’t approve of him. And you can’t really blame her. He’s kind of an ass. The purpose of the book is to make him a bit less of one.

Lady Betty was kind of a tour of American high society, but Lord Loveland is pretty much the opposite. I’d say Val keeps hitting new lows, but the lows are pretty hard to choose between, and I don’t think I could put them in order. He’s a waiter for about a second and a half, and then he joins a super low-end touring company of actors. His new BFF is a homeless guy. I mean, he’s a really sweet homeless guy, but still.

Val’s not too horrible either, after the first few chapters. I think the Williamsons were pretty successful at making him awful enough at the beginning that you want to kick him without making you hate him for the entire book. I sort of wish they hadn’t done it by making him so stupid, though. I guess he has to be, or the twists and turns of the plot would strain belief more than they already do, but I have great faith that the ingenuity of the Williamsons could have produced something less embarrassing to read. Oh well. At least by the end he has a very clever fiancée who will presumably save him from the consequences of his stupidity in the future. I guess I prefer my Williamsons to strike more of a balance between lovely scenery and impoverished noblemen; I find you need the former to prevent the latter from becoming irritating, and vice versa. But honestly, I can’t say that this book wasn’t pretty adorable.

Lady Betty Across the Water at Redeeming Qualities