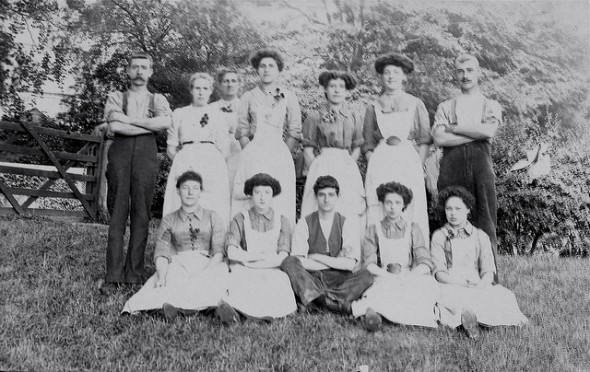 I can’t believe I’ve never written a post about servants on this website, but since there are so many other websites and books out there who’ve covered the subject in much more detail (and possibly better than I will), this post is a quick and dirty rundown of the who, how, where, and why of Domestic Servants in Edwardian England.

In her memoirs, Before The Sunset Fades (1953), Daphne Fielding, ex-Marchioness of Bath, detailed the forty-three member staff employed at Longleat during the Edwardian era:

Such a large staff was not typical amongst all great country houses, but the scope and scale of the house, not to mention the entertainments and house parties and fetes held on the estate, required a large staff of mostly invisible employees to keep everything humming along. Outside staff usually comprised of coachmen, grooms, stable boys, gardeners, gamekeepers, and later the chauffeur/mechanic. Some households even hired their own dairymaids, who churned the butter, milked the cows (though some localities employed cowkeepers for this task), watched the cheeses, and made the cream. If there were no chef (usually male, always French), there was a cook (a woman, always British), who unfortunately was usually paid much less than her male counterpart. Included in the wages of domestic servants were allowances for beer, sugar, and tea, and they given annual gifts of cloth with which to make up their uniforms.

Much further down on the social scale, etiquette books and authors who advised on household management, such as Mrs. Beeton, gave this advice on the recommended number or variety of domestic servants one could afford based on income:

By the mid-Edwardian era, legislation was introduced to protect the rights of domestic servants, and Lucy Maynard Salmon’s 1901 publication, Domestic Service, covers these legal, social, and employment aspects of domestic servants in both Europe and America. Though WWI did not break the tradition or need for servants, post-war housewives had long been admonished by women’s journals and newspapers and books about self-sufficiency, and the invention of household appliances gradually chipped away at the dependence on servants. Nevertheless, the character of the country house, or even the London mansion, was largely created by its large staff, and being “In Service” was considered a coveted position for the lower classes for a surprisingly long period in history.

Further Reading:
The Domestic Staff – Bricks & Brass
Domestic Servants in Hinchingbrooke House
Victorian Domestic Servant Hierarchy and Wage Scale
The Up-to-Date Waitress
Dining at Preston Manor
Up and Down Stairs: The History of the Country House Servant by Jeremy Musson
Life Below Stairs in the 20th Century by Pamela Horn
The Rise & Fall of the Victorian Servant by Pamela Horn
Rose: My Life in Service to Lady Astor by Rosina Harrison
Life Below Stairs: In the Victorian & Edwardian Country House by Sîan Evans
Below Stairs: The Classic Kitchen Maid’s Memoir That Inspired “Upstairs, Downstairs” and “Downton Abbey” by Margaret Powell