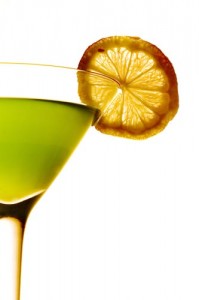 What do you think of when I say the words Manhattan, Gin Sling, or even a Daiquiri? Perhaps Carrie and Samantha on Sex And The City? James Bond? Sunbathing on the beach? The thought of our proper Edwardian gentlemen and ladies swilling cocktails at a soirée doesn’t even come to mind, but surprisingly, most of the traditional cocktails we drink today had their roots in the 19th and early 20th centuries.

Professor Jerry Thomas wrote the first bartender’s guide, How to Mix Drinks; or, The Bon Vivant’s Companion, in 1862 which included listings of recipes for Punches, Sours, Slings, Cobblers, Shrubs, Toddies, Flips, and a variety of other types of mixed drinks were 10 recipes for drinks referred to as “Cocktails”.

The recipe for a gin sling is found in Mrs. Beeton’s cookbook, which shows the acceptability of gin in middle-class households by the mid-Victorian era:

1 wineglassful of gin,
2 slices of lemon,
3 lumps of sugar,
ice (or iced-water)

The Manhattan as we know today (and as evidenced by its name) was conceived in New York City for a party held in honor of Samuel J. Tilden in the early 1870s. Though some experts claim the Manhattan predates this event, most concede that the mixture of American Whiskey, Italian Vermouth and Angostura bitters served was made famous as the Manhattan because of the illustrious guests.

As for the Daiquiri, this cocktail was invented in circa 1900s Cuba, though as seen in this passage, its creator is disputed:

The same recipe without the egg is known in Cuba as “Daiquiri.” Daiquiri was so named by a prominent young American woman in 1899, when she visited the town of Daiquiri. which is a very short way from Santiago.

Though forms of mixed drinks had been consumed by the aristocracy since the 1630s, by the turn of the century, many of the smartest London hotels and restaurants—no doubt due to the number of wealthy Americans flocking the European capitals with money to burn—opened “American-style” bars where cocktails could be ordered and enjoyed during dinner and, towards the 1910s, dancing.

Other, more interestingly-named cocktails served at Edwardian parties and American-style bars include the Flash of Lightening:

A wine glass of brandy; half a teaspoon of gingerette; tablespoon of raspberry syrup. Shake well with ice, and strain.

One egg;half a sherry glass of strawberry syrup; one glass of brandy. Shake up well, and strain.

and the Blue Blazer, a drink which required much theatrics, as the recipe entailed: 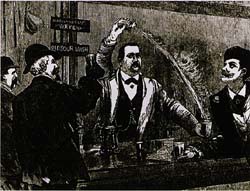 One wine glass of Scotch whiskey; one wine glass of boiling water. Put the whiskey and boiling water in one mug, ignite the liquid, and while blazing mix both ingredients by pouring them four or five times from one mug to the other. If well done, this will have the appearance of a continued stream of fire. Sweeten with one teaspoon of powdered white sugar, and serve in a small tumbler, with a piece of lemon.

One reply on “Cocktail Hour”