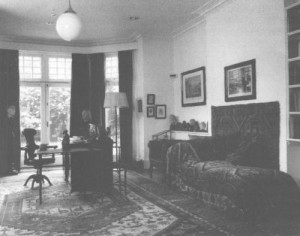 An I have for a future WIP is a bit of a psychological thriller and a bit of a gothic romance. Thus far I thinkit’s part of a trilogy dealing with psychiatry in the Edwardian era, but it’s so fascinating to realize that what we think of as “modern” had its roots in the late Victorian era and the Edwardian era.

Freud’s revolutionary tome The Interpretation of Dreams was released in German in 1899 and was finally released in English in 1913. In this book Freud introduced the Ego and his theory of the unconscious in regards to dream interpretation. He also discusses what would become known as the Oedipus Complex.

The proper Edwardian would never even think to read these books, much less the controversial series of books written by Dr. Havelock Ellis, a British doctor and sexual psychologist. Ellis co-wrote the first book on homosexuality entitled Sexual Inversion in 1897, which was quickly followed by such titles as Analysis of the Sexual Impulse, Love and Pain, The Sexual Impulse in Women (1903), and Sexual Selection in Man (1905).

Oddly enough, despite the disapproval of the talk of sex in a public forum, as well as the extreme sheltering of young women from anything that could corrupt their innocence (and this included works of fiction! Balzac, Flaubert and de Maupassant were kept away from girls, and heaven help the child who got their hands on Elinor Glyn’s Three Weeks!), the aristocratic-class was much more frank about their bodily functions than the middle-class.

Despite the burgeoning field of psychiatry, outside of intellectuals, the topic held no interest for the common man–or woman–raised to never view themselves as an “individual” independent of the movement of others.

The hero of my WIP is deeply interested in psychiatry and the intellect–an interest that proves to be his downfall when it comes to my extremely tortured heroine. *G*