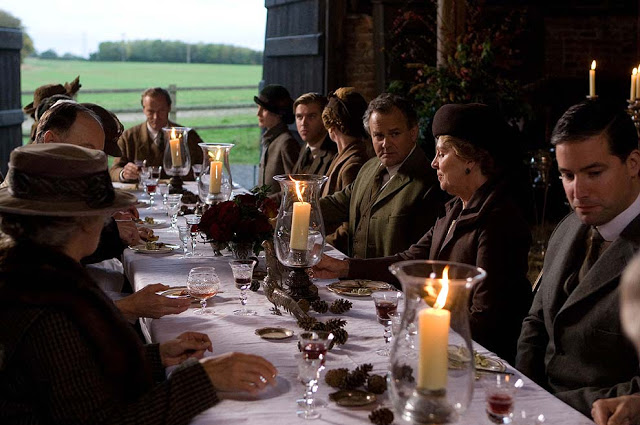 After a long day’s shoot, the ladies (and non-shooters) traveled by cart or motorcar to meet the sportsmen at an appointed place, where servants laid the table for a hearty luncheon. Some lunches were incredibly lavish, and some were downright miserly, as recounted by the pseudonymous sportsman “Scramo”:

There seems to be a great diversity of opinion as to how the inner man should be catered for in the way of lunch whilst out shooting. One very seldom meets with the happy medium, it is generally either over or under done. Talking of the latter, the most curious experience I have had of it happened when shooting one day with an old Scotch laird.

We had a very hard walk all the morning, and about half past one I began to feel somewhat hungry, especially as I had made an early breakfast and an early start, having had to drive eight miles to the shoot.

“I wonder when we are going to lunch?” queried my brother, who formed one of the party.

“I suppose about two, I can’t hold out much longer though,” I answered.

Two o’clock came, yet no signs of lunch. I had noticed the beaters and keepers chewing some dry bread and cheese while they were at work, and thought it rather strange.

At half past two my brother remarked that he supposed we were working up to a farm house we saw in the distance, where we should be rewarded with a sumptuous repast; but no ! on we trudged, feeling fainter and fainter, when I looked at my watch and found it was three o’clock. I could stand it no longer, so went up to the laird and said,—”I say, Mr. M I’m so hungry, I can hardly get my gun up to my shoulder, what time are we going to lunch?”

“Lunch!” he squeaked, with a high falsetto voice. “Lunch!! what do young fellows like you want lunch for? I never take it myself, and I’m three score and ten!”

He certainly looked as if he had been manufactured out of leather with a blunt knife.

“Well I’m hanged if I move another step till I get something to eat,” said my brother, boiling over with rage.

We both sat down under a tree, and simply struck work!

At last one of the keepers was sent off to a farmhouse, and brought back a jug of milk, some “baps” and home made cheese, with which we had to be satisfied for want of something better.

Neither my brother nor I shot with that Scotch Laird again!

Within a week, and within six miles I met with the opposite experience.

I went to shoot with a noble lord who was extremely fond of showing off.

He did not shoot, but came out to slang the keepers; he knew nothing about sport, but liked to show his authority.

“Time for lunch,” he called out in the middle of a drive. We were covert shooting and out we had to pull, nobody daring to suggest that we should finish the beat!

We were marched off to one of his lodges that faced the high road, and just inside the lodge gates a large table was laid out so that all the passers by should see it, garnished as if for a dinner party, with a butler and four powdered flunkeys in attendance, and a chef Very much en evidence.

We had soup, fish, entrees, roasts, &c., &», in fact it was nothing less than an alderman’s feast, champagne, chablis, port, sherry, liqueurs, &c., followed by superb cigars and coffee. We of course wasted much time over this repast, much to the disgust of the head keeper and the real sportsmen.

However, the little lord had to be humoured with his hobby.

The shooting was not so deadly after lunch as it was before!

This is an example of how it can be overdone; but anyhow it was preferable to shooting all day on an empty stomach, though scarcely sportsmanlike. There is no doubt that if one is taking hard exercise, it is absolutely necessary to feed well in the middle of the day. A plain good lunch, however, is all that is wanted, and there is no reason why it should not be done comfortably.

A relation of mine with whom I shoot a great deal, does what I consider the proper thing. At lunch time, if the weather is fine, one of Edgington’s paragon tables, which rolls up into a very small compass, with seats to match, is laid out in a sheltered spot, when we regale ourselves with good cold joints, baked potatoes, cake, biscuits and cheese, accompanied by either beer, or whisky and soda, with a ‘tot up’ of good old brown sherry. The beaters are supplied with plenty of cold meat, bread, and slices of cold plum pudding, washed down with a copious supply of beer, and then an ounce of baccy to each man. Needless to say, they all start again thoroughly refreshed and happy with themselves and their master.

It is a shame to see the way the beaters, who have all the hard work to do, are treated in some places—very often they have nothing more satisfying to work on than a piece of stale bread and a junk of rank cheese.

In cold weather I have seen at some shootings a lunch cart come out with a huge cauldron of excellent Irish stew, steaming hot, and after the ‘guns’ have eaten to their heart’s content, the remainder is served out to the keepers and beaters. This is an excellent plan where it is practicable.

In Yorkshire, when driving grouse late in the season on a well-known moor, we had for lunch most delicious pies made with grouse, rabbits, and potatoes, and although they had to be brought some six or seven miles from the lodge, they were as hot as if they had just come out of the oven, having been carried in a clothes basket wrapped up in blankets. The blankets must be new one?. The Yorkshire folk take a lot of beating in the way of pie making.

A menu found in Mrs. Beeton’s Household Management is no less lavish!:

For more information on the history and the food of the shoot lunch, check out The Shoot Lunch: The Tradition, the Camaraderie and the Craic by J. C. Jeremy Hobson

4 replies on “The Shoot Lunch”