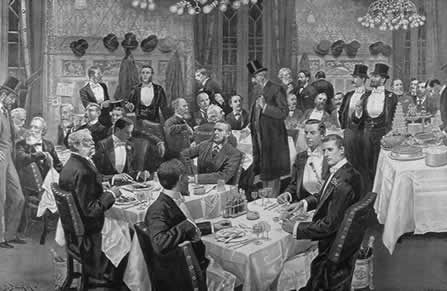 DURING the last five years Colonel Mark Lockwood, M.P., was Chairman of the Kitchen Committee of the House of Commons. This post is not a bed of roses; in the consideration of some persons it is not even a post of credit, as Colonel Lockwood explains in an interesting article on the Kitchen Committee in the Strand Magazine:—

“I may mention a conversation which took place between a man who was canvassing for me at the recent election and a voter.
“My canvasser called at a house and requested the voter to promise his support in my interest; the voter, without discussing politics, immediately said: ‘I ain’t going to vote for a man who is only in the kitchen; I want a man who is in the ‘Ouse,’ so that it is evident that in his mind the position was not one of distinction. To the credit of my canvasser I ought to record the fact that he was not staggered by this false estimate of the position, but only showed his annoyance by saying: ‘Oh, you don”t want a man in the kitchen, don’t you? Well, if your man gets returned they will put him into the boot-hole, where he will have to clean the other members’ boots !'”

During Colonel Lockwood’s term of office, the total number of meals served amounted to 750,000. There would be no uncommon difficulty in providing the meals were the numbers to be provided always known beforehand; but there are many unforeseen circumstances that may arise to upset the most careful calculations:

“For instance, a delicate question may arise during the debate, and the Whips may insist on keeping all members as late as possible; or divisions may take place just before 7.30 which keeps members until eight o’clock.

“In such cases double the number of members will demand dinner, and the resources of the kitchen and the activity of the staff are taxed to the fullest extent. Then, again, in anticipation of a great full dress debate, dinner will be prepared for five hundred. The debate suddenly collapses or runs out before time, there is a count-out, and few, if any, members will require dinner.

“The stock of provisions ordered has to be consumed somehow, and a large loss has to be faced on the weekly bills. Then, again, the suspension of Standing Orders may lead to an all-night sitting, and that sitting may be carried on until twelve o’clock the next day, when suppers and breakfasts are demanded by tired members, not in the best of tempers, and therefore very difficult to please.”

Patience as regards his food is not a characteristic of the English M.P. Irritated by some trifle—failure to catch the Speaker’s eye is a common cause of bad tempered members go to their meals in a mood for finding fault with everything.

Even tea on the Terrace sometimes is followed by grumbles:
“Members with parties of ladies soon lose their patience if there is anything like delay, which is curious, as one would have thought that the longer the ladies stayed the better pleased the members would have been.

“In the old days we had waiters on the Terrace, and it was during my Chairmanship that waitresses were appointed in place of the men. Would anyone imagine that even such a simple affair as this caused us trouble? At one time there were serious heart-burnings in the minds of the wives of some of the members owing to the good looks of our excellent female staff, and those ladies did not fail to let it be known that they were anxious on the subject.”