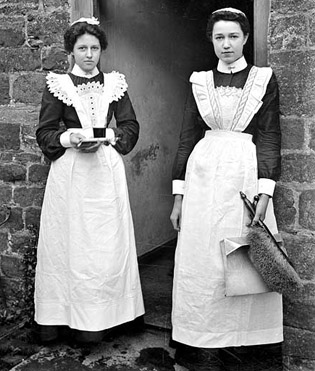 I left the factory for a short break and went into service when I was fifteen. Mother would have preferred me to be placed in ‘good service’ as she had been in her time, but I went as a ‘maid of all work’. I was expected to wait at table, getting my own meals when I could, there being no alloted times for the servant. I took the food into the dining -room and was given a plate with mine served ready to eat, which I would take back into the kitchen and eat standing up by the draining board, or at least attempt to, because by the time I had taken the vegetables round to the other diners at the table and returned mine was invariably cold. There was no point in my sitting down because in about ten or twelve minutes the bell would ring for the sweet to be brought in. Before I could start on my sweet, the bell would ring again for me to clear the table.

These conditions were the norm for a general servant or ‘generals’ as we were called. Many of my school friends became ‘skivvies’ by the fact of being females and there being very little other work for them, other than in one of the factories. It used to amuse me when factory girls looked down on us as inferior, calling us ‘drain ‘ole cleaners’. Some maids, after a long period in service, acquired the accents of their employers and, in their turn, looked down on factory girls and thought them ‘common’.

A ‘general’ was expected to do all the housework, preparing the vegetables and the cooking. I had to be up at six-thirty in the morning and clean the master’s shoes and get the children’s clothes ready for school. I was small for fifteen and their own daughter, who was thirteen, had reached pubescence and I had not; I was treated as a child in any way, or even as a young person.

When my master or mistress went out at night, I was expected to stay up in case one of the young children woke and called. I was left plenty of ironing to do and silver to clean just in case I got sleepy; then up again next morning early.

There was little personal time at all but I used to steal a few minutes very late at night peeping into the master’s books. His wife said she couldn’t understand them so she was sure I could not either. I was only allowed to dust them when she was there. My memories of that place are that I was always tired, always hungry and listening to the wrangling of my employers.

I was told that I smelled which, if true, would not have been surprising as I was not allowed to use the bathroom; I would not have had time anyway. He was a sub-editor on one of the London newspapers, and years later, when reading his obituary, I saw that it ended with ‘He had a wonderfully happy marriage’. Not whilst I was there, he didn’t. I wonder why the Marriage Guidance Council don’t employ servants or charladies who have really seen it all from the inside?

When I was sixteen I took a daily part-time post as I was needed at home in the afternoons. It seemed to mother that I was being starved as part-timers weren’t fed, except this one occasion. It was Christmas time and the lady for whom I worked had persuaded me to stay for midday dinner, although I had persisted in telling her my own family would not start Christmas dinner without me. I must have been naive if I thought that she meant me to sit at the table with the family, there was no room on the kitchen table where all the food was laid out so I had mine on the draining board (again) by the sink. I was full of self-pity thinking, ‘Here I am, sitting by the sink, having my Christmas dinner, while they’re all waiting for me at home’. She had kept me there, the cunning thing, knowing that no servant would have a meal and then walk out leaving the washing-up and the litchen untidy. When I reached home in mid-afternoon the family had had their dinner, except mother who would not have hers until I was home. I didn’t get a penny extra for that afternoon’s work; but, after all, I had been given my meal.

So back again to another factory, this time to ‘His Master’s Voice’, now ‘E.M.I.’. I was employed on a machine for drilling metal discs, a day’s work being a full truck-load. Men were engaged on the same job on the night shift using the same machines, but they did not fill their trucks. Although I never met any of the men, I used to exchange notes with the young man who worked my drill. On one occasion I told him in a note how lazy I thought he was and mentioning the difference in our pay. In his reply he said, “If I get twice as much as they pay you and they are making a profit out of me, how much profit do you think they’re making out of you?”

Starting factory work at such a young age we were teased unmercifully, a factor being that we were all much smaller for our age group than the present generation. I was often told, “As a girl, keep your place”, but I was never quite sure where my place was. And on my way home from the factory I was shouted at by passers-by, “Girls taking men’s jobs”. It was all so confusing. Whilst working we would be sent from one department to another on spurious errands such as “Go and get the key of the boiler” and “Go for a long stand” and then shouted at by the charge-hand for standing about. Then we would be teased about sex, which had little significance for us immature girls. One rough woman who cleaned the boss’s office told us “Oh, I put oil of wintergreen on my husband when he starts anything; I’ve got a right to, after bringing up five kids”. It was quite some time after that before I realised that she had used the linament as a form of birth control.

7 replies on “The Life of a Working-Class Girl”