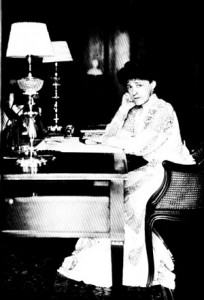 Without fail, after the sunshine and bustle of summer months spent in exclusive summer resorts dotting the New England coast, New York Society repaired to their country homes in Connecticut or more likely, the Berkshires, in autumn. Following this social calendar also, was the future chronicler of this tight-knit, wealthy circle, Edith Wharton. It is here Wharton built what she considered her “first real home.”

The Mount was to be a writer’s retreat and also a place for entertaining distinguished guests like Henry James, the Vanderbilts or her neighbors at Ventfort Hall, the George Morgans. Inspired by the 17th century seat of Lord Brownlow, Belton House, and classical Italian and French architecture, she used the principles detailed in her first book, The Decoration of Houses (1897), when she designed the house. Accordingly, she stressed that “good architectural expression included order, scale, and harmony.” On a plot of 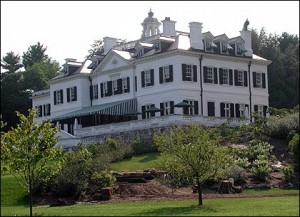 113 acres, the house overlooked Laurel Lake, with spectacular views to the Berkshire Hills and beyond, its striking white stucco exterior set off by black shutters and rose from a foundation of coarse field stone. Three stories at its entry elevation, this main house is augmented by Georgian Revival gatehouse and stable, and a greenhouse, while the garden side was of two stories, with an opening onto the large, raised stone terrace overlooking the grounds.

A visitor to the house would enter from a courtyard, then ascend a flight of steps to the main floor where the principle spaces–library, drawing room, dining room and sitting room–would open onto a terrace which offered that spectacular view of the lake and the hills. From this terrace, a Palladian staircase led to a “lime walk” of linden trees, which connected the two formal gardens on the estate. 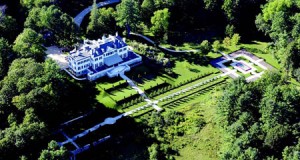 The gardens were Wharton’s own labor of love, expressing the ideas of her 1904 release, Italian Villas and Their Gardens, envisioning her gardens as an elegant series of outdoor rooms. Designed and constructed between 1901 and 1907, they are the only surviving landscape elements she designed in the United States. After the “lime walk,” one was a walled Italian garden with walkways and a lion’s head fountain, given minimal plantings, so that it had “a charm independent of the seasons.”

Contrasting this was the flower garden filled to the brim with petunias, phlox, snapdragons, stocks, penstemons and hollyhocks, and featured a dolphin fountain and a latticework niche. To complete the landscaping was a rock garden, for which Wharton searched out native varieties of sweet ferns. To form a gradual transition from the formal plantings to the landscape beyond, clipped hedges and trees followed Wharton’s principle that “each step away from architecture was a nearer approach to nature.”

It was here Edith Wharton wrote several of her novels, including The House of Mirth, the first of many chronicles of the true nature of old New York, and entertained the cream of American literary society, including her close friend, the novelist Henry James. But this haven failed to completely soothe Wharton’s 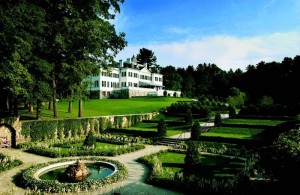 restless spirit; acerbated by Teddy Wharton’s alcoholism and general dissipation, she sought refuge in Europe and by 1910, the Wharton’s had separated. After selling The Mount in 1911, they finally divorced in 1913 and Wharton remained primarily in Europe, where she continued to write, publishing such masterpieces as her Pulitzer Prize winning novel, The Age of Innocence and her final, incomplete manuscript, The Buccaneers, before passing away in 1937.

In the meantime, The Mount was passed from owner to owner, first a private residence, then a girls’ dormitory for the Foxhollow School, and the site of the theatre company Shakespeare & Company. It was finally purchased by Edith Wharton Restoration, which has restored much of the property to its original condition. Currently open from May to October for visitors and tours, The Mount unfortunately faces foreclosure after 106 years of existence. Despite this hovering dark cloud, the estate nonetheless retains the elegant, precise charm of Wharton’s imagination.

7 replies on “The Mount: Home of Edith Wharton”