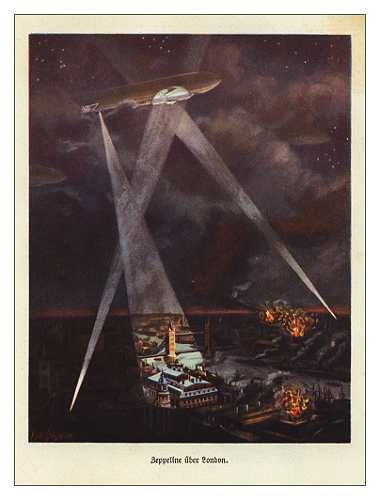 Karl Kingsley Kitchen (1883-1935) was an American journalist and man-about-town who wrote witty columns for various New York newspapers chronicling his travels, his meals, and his famous supper party guests. In his 1916 book, After Dark in the War Capitals, Kitchen describes the appearance of various European capitals under the shadow of war. Though his anecdotes are written with his witty flair, the tension and strain of living under threat of attack is palpable.

Of all the war capitals that I have visited—including Berlin, Vienna and Budapest—London is outwardly the most affected by the war. Naturally the darkened streets bring this fact home to the visitor. But as a matter of fact, there are more signs of war in evidence in the daytime in London than in any other of the large capitals.

In the first place the city is filled with soldiers. In the continental capitals there are plenty of soldiers in evidence but here in London they are ten times as numerous. Wherever you turn you encounter men in uniforms. Recruiting stations dot the town and they are usually surrounded by khaki clad men who are trying to win recruits; soldiers are heard as well as seen.

In the second place a large number of the soldiers are wearing bandages or limping with the aid of canes.

The restrictions in regard to liquor selling also bring the war home to the visitor in London, as well as to the native. The public houses, as the saloons are called, are open only five and one-half hours out of the twenty-four. Only between 12 and 2 in the afternoon and 6 and 9:30 in the evening is it possible to buy a drink in a cafe or restaurant.

While visitors in London do not have to have their passports examined by the police as in continental capitals—unless you remain longer than twenty-eight days—the forms that have to be filled out at the hotels and boarding houses are as annoying as the police inspectors. And if any important detail about your future plans is missing you receive a visit from a very polite detective who clears up the situation to his satisfaction.

The street lamps along the entire distance [from Fenchurch Station to the Savoy, where Kitchen was staying] were painted black, allowing only the dimmest rays to fall on the pavement, and every building was in total darkness. Only the head and tail lamps on the taxicabs and dimly lighted buses revealed the way, but my chauffeur sped ahead seemingly unmindful of the danger. Half a dozen times I expected to crash into the slow moving vehicles which were in our path.

I do not recall visiting London during the middle ages, but I doubt if its streets were as dark in those days, or rather nights, as they are to-night. Certainly they must have been safer, for speeding taxicabs did not exist in those times. And when it is remembered that darkness falls in London long before 6 o’clock at this time of the year the confusion and danger resulting from this situation is apparent. Of course, one gets used to it in time. In fact, after four or five nights of darkness I became reconciled to it.

Of course, it is absurd to state that the authorities have put these regulations in effect for any other reason than a well-grounded fear of Zeppelins.[..] when you ride about the city and see numerous buildings that have been wrecked by Zeppelin bombs, searchlight stations, and anti-aircraft guns you begin to realize that war is at your very door. You never know what night the Zeppelins will be dropping bombs on your hotel and despite the fact that you might welcome a raid for the pleasurable excitement of seeing a Zepp in action it must be admitted that Berlin and Vienna have the advantage of London in this respect.

However, this has not caused as great a change in the city’s life as one would suppose. Instead of remaining in their homes the people find their way about in the dark. True, the streets are not as crowded as they used to be, but if the people have any place to go they are not deterred by the darkness. After the brilliantly lighted streets of Berlin and Budapest, London is a decided contrast. But more goes on in the dark in London than in some of the well lighted continental capitals.

Among the working classes there is great contempt for the Zepps. Of course much of this is bravado but a surprisingly large number of people believe it is their duty to disregard Germany’s efforts to strike terror in their hearts. They make many jokes at the kaiser’s expense and one of the most popular dishes in the restaurants is “Two Zepps and a stack of clouds”—-sausages and mashed potatoes.

In spite of the fact that London is dark at night and that several hundred men, women and children have been killed and injured in addition to considerable damage to both public and private property—the Zeppelin raids must be accounted failures up to date. The only thing they have accomplished has been to increase the hatred toward the Germans. A great deal has been printed about the hatred in Germany of the English, but it does not equal the hatred toward the Germans by the English. The bitterness of this hatred is apparent on every side. And it is carried to an absurd degree. To be seen reading a German newspaper or overheard speaking German is sufficient to provoke a riot. Everything German is under the ban. The kaiser is spoken of as a criminal of the lowest type and the German people are charged with every vice and crime on the calendar.

There is very little feeling against the Austrians, who are regarded as German dupes. And, of course, there is even less feeling against the Hungarians. Still the latter have been interned in England, although the English in Hungary have not been molested.

6 thoughts on “WWI Wednesday: After Dark in London”