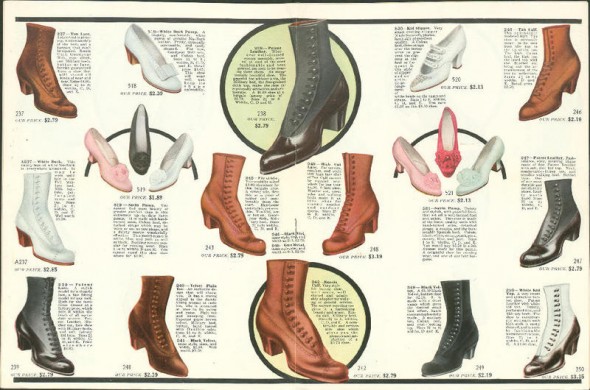 It is to the influence of the motor-car and of the hobble skirt that we owe the marvellous array of delightfully pretty boots and shoes that now form an essential part of the well-dressed woman’s toilette.

The Parisienne, who has always made a particular point of clothing her feet daintily, favours boots as a rule, because of their neatness; while the Englishwoman is more prone to the wearing of shoes. When the hobble skirt, cut extraordinarily short, made its appearance it was realised that more particular attention than ever would be focussed upon the feet, and then it was that the boot and shoe makers put forth their best endeavours, and brought to light the beautiful specimens of footgear that are to be seen now.

Into the limbo of forgotten things has gone the vogue for humdrum black leather boots and shoes, and in every wardrobe are to be found coloured footgear, as well as daintily soft suede specimens of shoes and boots, in some instances allied to patent leather, and in others to calf.

Since the motor-car became perfected and reliable it has been the pleasure of luxury-loving women to wear black velvet shoes whilst driving, and even whilst walking a short distance upon clean pavements and in the park parterre. Following that vogue, has come one for brocaded satin and cashmere shoes which are to be fashionable for winter wear, though for wet walks and country mire they are changed for boots with leather vamps and suede or cloth uppers, and a heavier sole.

The salutary lesson has been well learned in modern times that it is not only right but possible to find comfortable foot leather. It was a startling revelation to the woman who pinched her feet to learn, as she did within recent years from the beauty specialists, that tight boots meant wrinkled faces, haggard eyes, and a miserable frame of mind. That this is so everyone realises, and the boot and shoe makers having been aroused to a sense of their duties, now produce their wares not only in a few sizes but in many and in every kind of shape, so that the foot in all its varieties of form can be fitted perfectly.

Still, it is customary in many families to have specially made footgear, and lasts are kept and bows and buckles form a finish. Heelless dancing sandals are much in favour, while suede, calf, kid, and patent leather are all utilised in modern footgear.

Every pastime, such as golf, skating, hockey, shooting, and climbing brings with it the necessity of special footgear. Upon the links women wear laced boots with high top pieces buttoned at one side; and for hockey and other sports similar sturdy footgear.

It is declared that much outdoor exercise has enlarged the size of the feet of the present generation of girls. This fact has not been without advantage to the makers of boots and shoes, who have been obliged to turn their attention to the production of elegance despite physical drawbacks, and thus it comes to pass that the footgear of the present day is quite as beautiful as that of other centuries, when boots and shoes were representative of the artistry of the craftsman.

No material seems too delicate for the modern shoemaker to handle. Cinderella’s glass slippers were scarcely less fragile than a pair made entirely of feathers of the tiniest possible size, in the graduated colours of the pheasant.

On the other hand, there are fur-edged and fur-lined boots, some with the buttonholes rimmed with fur, a new freak, and an amusing evidence of the present supremacy of fur. And in between these extremes there are myriads of patterns of fleeting or permanent interest; patterns with barred and buttoned fronts, patterns of the old Cavalier design, splendid with big buckles, and mules of quilted silk for the boudoir, with a little bunch of flowers instead of a bow decoration; overshoes for frosty days, and for the rain the ever-faithful galosh.

2 replies on “The Well-Shod Edwardian Woman”