“Catherine had a bad cold.”

“The result of a pneumonia blouse, I suppose! As long as girls strip themselves naked in January they cannot be surprised at their chests and lungs resenting it.”

“The following such a fashion is the solitary lapse from common sense I have ever detected in Catherine.”

It seems impossible that a garment as simple as a sheer, frothy V-neck blouse could arouse so much furor at the turn of the century, but you must remember that until then, women only exposed their necks, shoulders, and cleavage in dinner or evening dress (though, in America, ladies often draped gauze over low-necked and bare-shouldered gowns). To transport such a display of flesh in day wear was nothing short of scandalous, and many quickly denounced the pneumonia blouse as a grave threat to morality. Some, as witnessed in the above excerpt, even considered the blouse dangerous for a woman’s health, with one columnist declaring: “In the spring carelessness in dress, which is to be avoided then more studiously than at any other time, not only because of the fickle weather, but because the human system is reduced in vitality, sends people to their graves at a shocking rate. Then the ‘pneumonia blouse’ of the injudicious girl or woman, in conjunction with the pneumonia germ careening through the streets in the high spring wind, is terribly effective.”

A 1906 article in The Evening Post, reporting on a “war” on the Pneumonia Blouse:

Here is a picture of actress Gabrielle Ray in a pneumonia blouse: 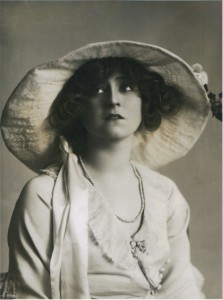 And here are links to extant pneumonia blouses here and here.

3 thoughts on “The Pneumonia Blouse”