According to E. Beresford Chancellor, if “we sought for one particular feature distinguishing London from the other capitals of Europe, apart from its immense proportions, it would probably be found in the number of its large houses–many of which are indeed private palaces.” Mayfair had not always been fashionable, and long after the areas of Bloomsbury, the Strand, and the even the City of London itself, had been abandoned by fashionable decree, the old private mansions remained. By the late nineteenth century, the private palaces of London clustered together along Piccadilly and Park Lane. However, a few mansions of note sat above Oxford Street, such as Portman House in Portman Square, Hertford (formerly Manchester) House in Manchester Square, and in other places in the West End–Montague House in Whitehall, and Stafford House in the heart of St. James’s. And lest we forget, the Prince of Wales’s London residence, Marlborough House, sat in Pall Mall. Click to open map of Mayfair.

In the Edwardian era, the most fashionable mansions, which frequently were the sites of the most exclusive social affairs and the most influential of political events, were Devonshire House, Dorchester House, Stafford House, and Londonderry House. 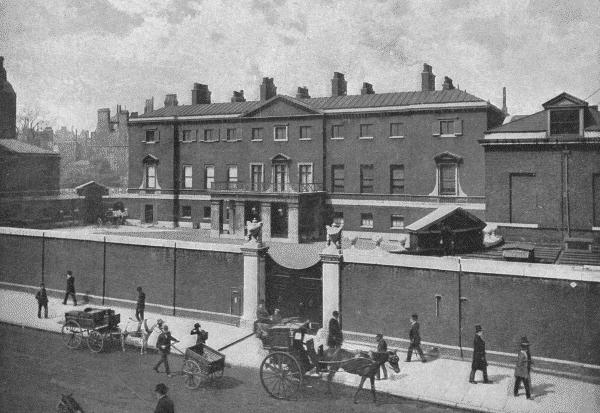 At first glance, Devonshire House appeared a plain, somewhat ugly mansion obscured by a high, solid wall. Forever immortalized by the antics of the 5th Duke of Devonshire and his two 5th duchesses Georgiana and Elizabeth, Devonshire House remained largely the same as when that menagerie resided within its tony walls. The mansion sat right on Piccadilly, an extremely busy and noisy thoroughfare–no doubt the reason for its walls. When the 8th Duke of Devonshire ascended to his title in 1891, and married his longtime lover Louisa Manchester the following year, Devonshire House became the center of London political life. The energetic and influential Louisa wielded her power from the mansion, and in 1897, she threw one of the most magnificent costume balls late Victorian society had ever seen. Not only English society, but Indian princes and princesses, American millionaires, and Continental aristocrats, attended this ball attired in sumptuous costumes worth thousands upon thousands of pounds. Despite her advanced state of pregnancy, Consuelo Marlborough recalled being laced tightly to fit into her costume, and finding her pleasure dimmed when walking across Green Park at dawn to see a number of homeless, wretched men sleeping in the grass. After the 8th duke’s death in 1908, Devonshire House passed to his nephew, who like aristocrats in the interwar era, abandoned his expensive, unnecessary London mansion and consigned it for demolition. 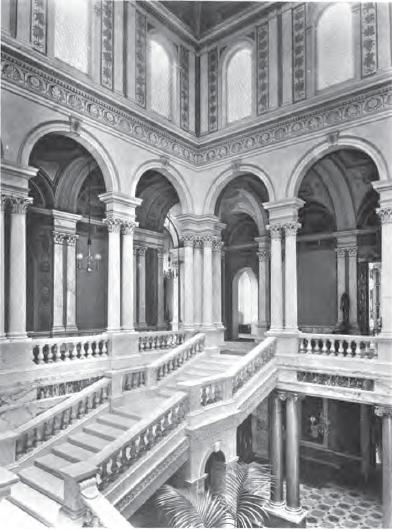 Dorchester House was one of Mayfair’s most breathtaking of mansions. Built for R.S. Holford in 1851-53 on the site of an older house of the same name belonging to the extinct earldom of Dorchester, Augustus Hare described it as “an imitation, not a caricature of the best Italian models.” The house was shaped like a parallelogram: the mansion stood before a triangular forecourt, a massive stone wall enclosed the grounds, and passage was gained through the lodge stationed at the entrance where Deanery Street ran into Park Lane. The most impressive part of this house was the grand staircase. It dominated the center of the house “in a great balconied hall that rose three full stories.”

This was also the hub of Anglo-American society, for Senator Whitelaw Reid was appointed American ambassador to St. James’s Palace in 1905, and rented the palace at a cost of $40,000 a year (about $960,000 in 2009 dollars). His lavish expenditure set the tone for American diplomats abroad, and very quickly it became apparent that the annual salary of $17,500 (about $400,000 in 2009 dollars) for a diplomat was not enough–which gives us a fair clue why it became the practice to choose wealthy men for diplomatic posts. Here Americans rang in the Fourth of July, and it was from Dorchester House where Alice Roosevelt Longworth prepared to make her court presentation to the King and Queen. After Reid died in 1912, the house was abandoned by the American diplomatic service as his successor, Walter Hines Page, was a man of much simpler tastes and fortune. During WWI the house was used as a hospital, and it was pulled down in 1926. 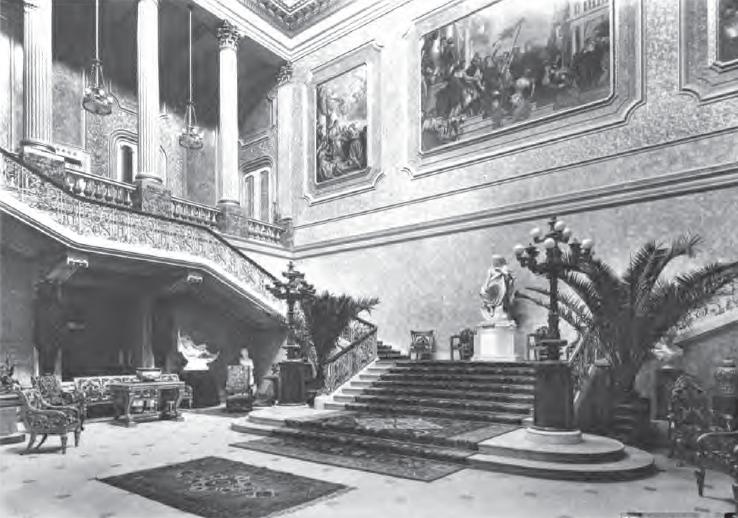 Stafford House was the London residence of the 4th Duke of Sutherland. His wife, Millicent, whose descent down the gorgeous stairway figured in so many Edwardian memoirs, was half-sister to Daisy, Countess of Warwick, and associated with both the Marlborough House Set and the Souls–a unique event, for the aims of the two social circles rarely, if ever, met. The home was initially built in the 1820s for the Duke of York and Albany, and was known then as York House. After the duke’s death in 1827, the home was but a shell, but it was quickly purchased by and completed for the 2nd Marquess of Stafford, and it was known as Stafford House from then on. So magnificent was the mansion, Queen Victoria is said to have remarked on a visit, “I have come from my House to your Palace.” The family were liberal in politics, and the 2nd Duke and Duchess of Sutherland entertained distinguished guests such as Harriet Beecher Stowe and Italian revolutionary leader Giuseppe Garibaldi in the 1850s, and the 4th Duke and Duchess followed in that tradition by extending an invitation to Dr. and Mrs. Booker T. Washington. After the 4th duke’s death in 1913, the house was sold to Sir William Hesketh Lever, who renamed it Lancaster House in honor of his native county of Lancashire, and donated the home to the nation in 1913. Lancaster House was the temporary residence of the London Museum between 1924 and 1944, and since then has been used for private government receptions. 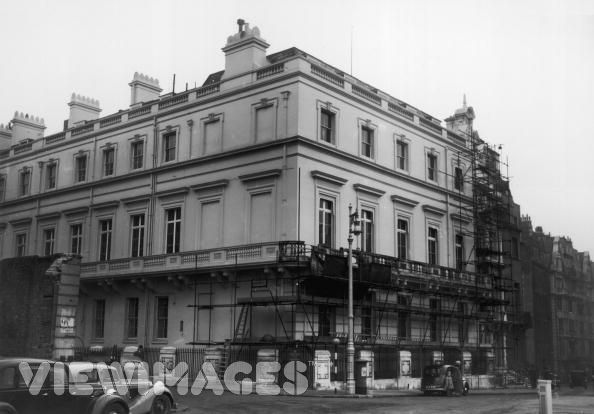 Also on Park Lane was Londonderry House, the residence of the Marquesses of Londonderry (pronounced “Lundundree”), the Anglo-Irish family of which Robert, Viscount Castlereagh, is the most well-known. Londonderry House was originally known as Holderness House, as it was formerly the residence of the Earls of Holdernesse, whose title went extinct with the death of the last earl in 1778. The house was purchased by the Londonderry’s in 1819 as a London residence for the family, who spent considerable time on their estate in Ireland. It was completely rebuilt and enlarged by the 3rd duke during the early 1850s, and at his death in 1854, the mansion rivaled Dorchester House and Stafford House for elegance. By the time of the 6th Marquess’s ascension to the title in the 1880s, the Londonderry’s had become staunch Unionists. The Marchioness in particular opposed Home Rule for Ireland and quickly gained prominence as a Conservative Party leader, going on to form the Ulster Women‘s Unionist Council in 1911. However influential and powerful Theresa Londonderry was, her political clout has been overshadowed by the extraordinary rift between she and her husband after his discovery of her affair with another man, and the possibility that his youngest son was not his own. Londonderry House remained in the family’s possession until 1965, when it was sold to the neighboring Hilton, and demolished to enable the hotelier room for expansion.

Of the political hostesses, Theresa (Nellie) Londonderry and Louise Devonshire, of the Conservative Party and Liberal Party, respectively, were the most powerful. In her memoirs, the Countess of Fingall identified them the dictators of the social scene, saying: “If you were Lady Londonderry’s friend or the Duchess of Devonshire’s, no one would dare to say a word against you. It was an equally bad thing to be the enemy of either.” Contemporary accounts distinguish Lady Londonderry’s regime as irrevocably haughty, and as a strong partisan–described by E.F.Benson as “a highwaywoman in a tiara”–her influence is said to have been behind some of the contretemps of the Tory party. Margot Asquith despised Theresa, characterizing her as arrogant and vulgar, but praised Louisa Devonshire as “the last great political lady in London society as I have known it,” noting that “she was powerful enough to entertain both the great political parties which few can do.”

After the Great War, the great London mansion and the accompanying social and political power attached to its grandeur began to pall. Not only had the winds of politics changed (the Labour Party began to dominate the British landscape), but these houses were unwieldy and expensive to maintain. Those that hadn’t already been opened to the public either followed suit or were shut up or, as in most cases, sold and demolished. Though these palaces may have disappeared (with the sole exception of Stafford/Lancaster House), and others not detailed have as well, there are many who continue to exist–Lansdowne House, Spencer House, Apsley House, etc–and continue the albeit “spiritual” link between today and Edwardian London.

Further Reading:
The Opulent Eye: Late Victorian and Edwardian Taste in Interior Design by Nicholas Cooper
Affair of State: A Biography of the Eighth Duke and Duchess of Devonshire by Henry Vane
The Private Palaces of London, Past and Present by E. Beresford Chancellor
The Marlborough House Set by Anita Leslie
Up From Slavery by Booker T. Washington
“The Cost of Representing America Abroad.” New York Times, April 5, 1908.
Wikipedia entries for Stafford House, Marquesses of Londonderry, Dukes of Sutherland, and Millicent Sutherland.
Currency Rates found at Measuring Worth

One reply on “Mansions of Mayfair”