I’ve just begun another marathon of The House of Eliott (which has lit a new fire beneath a plot I’d thought long burnt out), and as an ex-fashion student and after watching Signé Chanel, a documentary on the preparation of Chanel’s Fall 2005 collection, I grew interested on the construction of couture houses of La Belle Epoque. I turned to my references and found Blanche McManus’s chatty and informative guide, The American Woman Abroad, full of pertinent information: 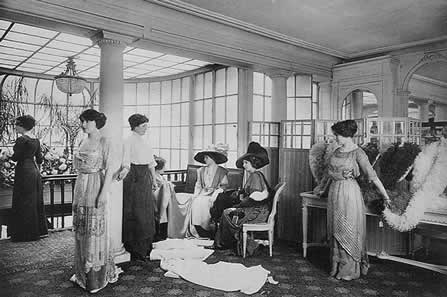 The ateliers where these famous Parisian confections are turned out are the hives where many grades of working women and girls earn a livelihood, a miserable livelihood many of them, catering for the luxurious tastes of the rich. In the first rank are the coupeuses, the cutters, who parcel out the stuffs according to given measures. Next comes the appreteuses, who are the first sewing hands, the basters; then the mechaniciennes, the machine stitchers; and the couseuses, the hand sewers who do the finer work and are called picturesquely, “les petites mains.” The making of a gown is divided further among four distinct classes of workers, the corsagieres, the garnisseuses, the jupieres and the lingeres.

The wealthy stranger sees nothing of this but a handsomely furnished apartment where the models are shown and an equally conveniently arranged salon d’essayage peopled by a score or more of attractively dressed employees: vendeuses, port toilettes, mannequins, fitters, etc. There may be a hundred or more working unseen in gloomy workrooms.

The principal employees, the first hands—the premieres, and perhaps the mannequins and one or two of the other privileged classes, earn a fair competence as a result of their month’s work, but the thousands of mere working girls who are employed in the industry are scarcely better off, perhaps not so well off in many cases, as factory workers. For twelve hours or more a day the more expert may earn as much as four or four and a half francs at the maximum, though the wage of by far the greatest number hardly rises above three francs while there is work, and then there is always the dull season to contend with when the greater part of the workers are laid off.

Another class which has not a little to do with my lady’s Paris gown are the workers in chambers, for a lot of this work, supposedly the product of this famous capital of beauty, is put out with workers in a dull, frigid mansard chamber where, in many instances, a wage of from two to two francs and a half a day is considered normal. How indeed does the other half live?

…The mannequins play one of the most important roles in these Palaces of Modes. They are the live “dummies” on whom are displayed the costumes. All day long they must promenade the salons of the establishments where they are employed, revolving slowly before the eyes of a critical battery of customers, that the effect of the gown may be better judged on a living figure than it may on a thing of wires and papier-mache.

Frequently there is a stage upon which the mannequins play their parts, parts which call for quite as much endurance as the most tragic roles of the real stage. Endurance, tact and skill in their highest forms are all called for, and upon the ability of the mannequin to impress the buyer with the graces of a particular gown depends the sale quite as much, in many instances, as upon the skill of the designer or the insinuations of the salesman or woman. The physical and mental strain is unceasing. From nine in the morning often until nine at night the mannequin must be on her feet, changing from one costume to another at the caprice of the most erratic of clients. Her position and advancement depend upon her ability to clinch sales. All her natural and artificial charms are brought to bear. The mannequins are selected for their svelt figures and for their beauty of face as well as of form. They wear a tight-fitting, black sheath garment, over which the gowns are shown.

A mannequin in a swell establishment is paid something like thirty dollars a month, perhaps a little more if her reputation as a seller is particularly good. Another service which she renders is posing in public places in the new creations of her employer that a new fashion may be well launched in the eyes of the public. She may be seen at Longchamps on the day of the Grand Prix, at Armenonville, at the Pre Catelan, indeed wherever fashion congregates. On the occasion of the Grand Prix she is generally out in full force, parading in the paddock as in the tribunes, or strolling in the enclosure reserved for high society. She will perhaps be dressed in the most bizarre of creations and be followed greedily by all eyes, but she glides along, seemingly unconscious of the throng or the part she is playing, though she divides the honours with the horses and the jockeys. All feminine Paris studies the mannequins on parade at Longchamps greedily and on the verdict does a new style catch on or fail. Betting on the success of a new style is as exciting as the “Pari-Mutuel” at the Grand Prix.

The little midinettes, who get their name from their habit of promenading the streets at the midday hour, are the youngest of the workers in the dressmaking establishments. The midinette has taken the place of the grisette of the days of Murger in the imagination and affection of the Parisian. Arm in arm they throng the pavements of the great arteries of fashion at the noon rest hour. They earn the smallest possible of living wages, not more than a franc to a franc and a half for a day of twelve, and sometimes sixteen, hours. This does not leave much of a margin for food and so they content themselves for the most part with a croissant or a brioche, eaten under some overhanging doorway or on a bench in the Gardens of the Tuileries, and this, with a swallow of black coffee which costs but a couple of sous, by some mysterious law of nature, serves to keep them so cheerful and ingenious of mind that they are able to costume themselves in a way that imitates the chic styles in dress with which they are so continuously brought into contact.

Last on the list of the army of dressmakers’ helpers in Paris are the trottins and coursieres, the former name being more particularly applied to the errand girls of the milliners’ establishments, and the latter to those of the dressmakers. One sees either, or both, of these little workers at all hours of the day laden with hat or costume boxes as large as themselves. These are carried by a not too conveniently arranged leather strap, and by such means is the bulk of the completed work of the makers of fashions delivered to their clients’ homes.

5 replies on “The Construction of a Couture House”