Tasha’s back again with her weekly recaps, with screencaps courtesy of Downton Online.

Did you all see the Downton Abbey skit on Saturday Night Live this weekend? It was soooo funny.

Anyway, this week I’m on pins and needles to find out who that guy with all the bandages is that Lord Grantham doesn’t recognize! Is it the cousin Mary was engaged to and the heir of Downton? A relative of Lady Grantham’s? Is it the English Patient? Questions! 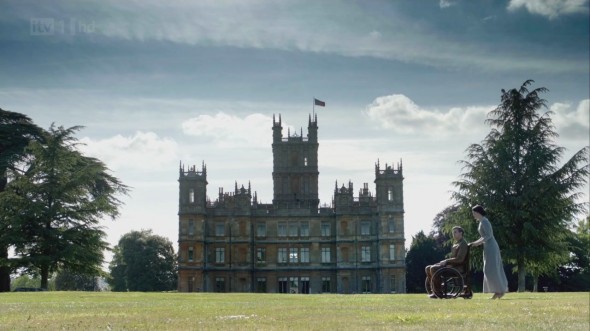 Mary’s rolling Matthew across the lawn in a wheel chair. That looks like hard work, just imagine how easy it is for those wheels to get stuck in the mud. She’s going at it like a champ, though. Meanwhile, Sir Richard is playing the “Don’t you want grandchildren?” card to Lady Grantham. Don’t you have two other daughters, Lady Grantham? Seriously. Meanwhile, army/doctor guy informs us that some Canadian named Gordon wants to convalesce at Downton Hospital. Okie dokie! That must be the English Patient.

Meanwhiles, with the war about to end, people are wondering what to do with all the soldiers. Lady Grantham is looking forward to having her house to herself again, but Isobel wants to keep it open as a hospital. This woman needs a hobby, or maybe she should open turn her own damn house into a convalesce home. Lady Violet is equally annoyed, but hatches a plan to distract Isobel from Downton and keep her out of everyone’s hair.

Back at Downton Hospital, Edith has caught sight of the Canadian Patient. This is awesome. She’s going to fall in love with him and move to Canada! They’re related, and we all know these Grantham sisters like to kiss their cousins. He sounds Canadian *now*? They’ve met before? This guy’s mysterious.

Joshua Reynolds portrait on the stairs! 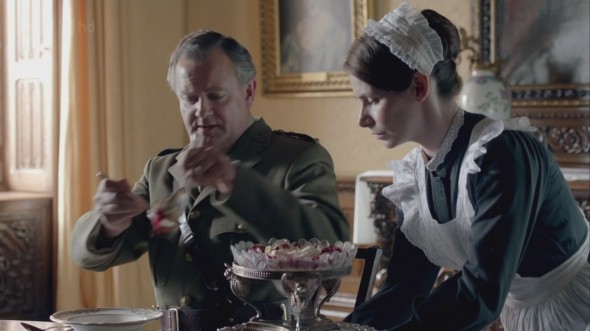 Lord Grantham has to serve himself. What inconvenience. Whenever I’m eating, I’m like, “Where’s my butler, yo?” so I can sympathize. Don’t worry, though, he has a maid to carry food to him so he doesn’t have to get up. Lord Grantham asks the new maid about her family and she gets awfully chatty. He’s going to put in a good word for her son–what a sweetie.

Bandaged guy is Patrick Crawley. Yes, the one who was the heir to Downton and died on the Titanic. Ahahaha. Did I call that one or did I call that one? Why does he have a Canadian accent? I’m confused, and so is Edith, who is the only person he’s confessed his true identity to so far. He says he lost his memory and they told him he was Canadian, so he just moved right on up to Canada and took his name from a bottle of gin! How romantic. It was only after he was injured at war that he remembered who he was.

Wah-wah, it turns out that Vampy Vera told the judge Bates paid her off to divorce him. That means the divorce won’t go through. I thought divorce by definition was where you paid someone off to leave you alone? Anna tries to rally, but O’Brien is listening. That’s never good!

Mary is back at Downton and telling Matthew about her future home. It was awfully echoey. And white, like a tomb. She sounds way excited about it–not. She tells Matthew, “I don’t have to marry him, you know.” Beg much? Matthew’s like, “Yeah you do, and if you don’t, stay the hell away from me.” Hey, Matthew, tone down the dickishness. 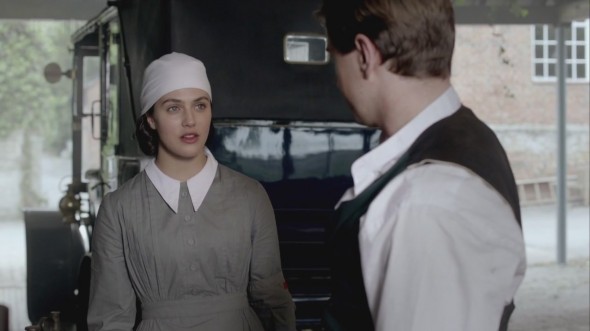 Now it’s time to catch up with Branson and Sybil. Remember last week when Sybil was all, “Stay away from me,” even though she’s the one who keeps coming to the garage? YEAH. This week she drops by on some sort of pretense about engines, and Branson offers to teach her allllll about them. I bet. Vroom vroom. Subject change (or maybe I was just thinking about engines), Sybil asks Branson to wait for her until after the war, if he can. Branson’s like, “Yeah! Okay! I’m cool with that!” Dignity, Branson, remember your dignity.

Lord Grantham is wearing his “informal” suit. Hahahahaha. It looks exactly the same as all the other suits he has? I guess the point is he’s not wearing a uniform for once this season.

Sir Richard is offering Carson a job, probs because Lady Mary can’t be without her favorite servant. Who knew Lady Mary bothered to discuss servants with Sir Richard. Carson’s not opposed to the idea, but wants Lady Mary to ask him, not Richard. Then he tells Lady Mary he needs to know what Lord Grantham thinks. Methinks he wants to go to this house as much as Lady Mary does, which is not at all. When Mary asks Lord Grantham about it, he’s all like, “There is nothing more ill-bred than to steal other people’s servants.” I didn’t know that! But what will Downton be like without Carson? Sadface! Looks like he’s going, though. Someone stop this wedding, plz. Looking at you, Matthew.

Edith finally tells her dad about the Canadian Patient, and Grantham feels the need to confront “Patrick.” He’s a little touchy with the bandaged guy. I think Patrick should have written before he showed up. Well, at least he can have kids, right? Since this is a Big Issue, Lord Grantham breaks the news to the rest of the family–sans Canadian Patient–that Patrick, former heir to Downton, is alive. Poor Matthew. How will he be a lawyer now that he’s in a wheelchair? Mary is PISSED. I think she was a bit relieved Patrick died, no? Or maybe she just doesn’t want to be burdened with another bachelor to choose from. Matthew descends into a shame spiral since even the Canadian Patient can do the dirty dance, and the conversation is over. 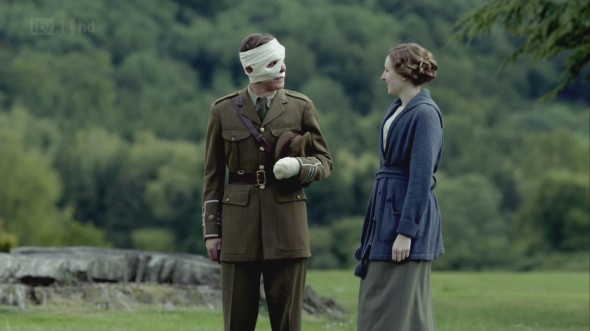 Meanwhile, that pesky baby of Ethel’s! Does it even have a name? Carson and Mrs Hughes decide to finally tell Lady Grantham about it. She’s willing to help by searching out for the major and bringing pressure on him to marry Ethel, even though it’s Ethel’s own fault. Letter time! It turns out the Major who sired Ethel’s baby died in the war. So no money from that quarter, I guess. Ethel wonders what “we” are going to do. What’s this we, Kemosabe? Ethel’s depressed. I’d be depressed too. But then I wouldn’t have had sex with that bastard major.

The new maid is crushing on Grantham.

It’s weird that the Canadian Patient sounds like a Canadian. It makes NO SENSE. If he got the Canadian accent after he lost his memory, why didn’t his English accent come back once his memory returned? But on the other hand, if you were trying to take over a dead guy’s inheritance, wouldn’t you also try to fake his accent, at least? Also, I also can’t figure out why the Canadian Patient’s just kind of hanging out in Downton, as if he doesn’t know where to go or is afraid of confronting the family. If he does have his memory back, he should have marched right into Lord Grantham’s library and been like, “Heya, buddy!” (but in an English way, of course). Edith, meanwhile, is not asking these questions. She is the perfect mark, for realz–she WANTS Patrick to be alive and isn’t inclined to question it.

Yay, the war is over! Oh happy day! “Why can’t the cease-fire begin now?” Good question. How horrible would it be to be killed in between the time where they decided to end the war and the official cease-fire?

Isobel has decided to help the refugees that Lady Violent conveniently arranged for her. Hooray! Violet and Cora are incandescent with glee and trying not to giggle. Poor Isobel, fleeced by the Grantham women again.

Oh dear, the Canadian Patient is showing a streak of temper. I don’t think he’s the best heir for Downton. But Edith can’t resist his wide, blinking eyes. Evidence suggests he could be Patrick, but he could also be one of Patrick’s friends who was from Montreal. Mary is completely against him being Patrick, but Lord Grantham doesn’t know what to think. Edith’s new plan is to find this friend to prove that the Canadian Patient is not him.

Bates went to London to have it out with Vera–or “reason” with her, as he put it, but we all know she’s not reasonable. He comes back–I guess later that night?–having walked from the train station. THAT’S NOT A GOOD SIGN. His meeting with Vera was “worse than you can possibly imagine,” and it looks like he got slapped. To repeat: She. SLAPPED. Bates. The woman is pure evil. How on earth did those two wind up together? O’Brien observes it all from a distance with her shark-like eyes. 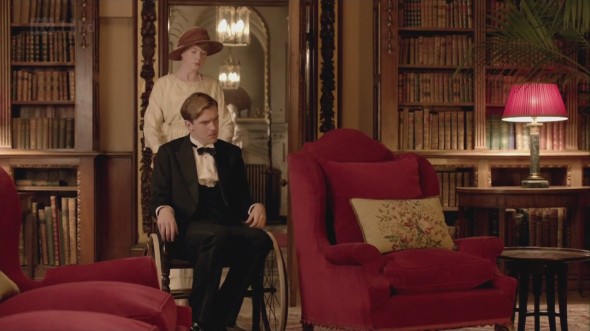 Thanks to collusion from Sir Richard and Lady Grantham, Lavinia has returned to Downton, with the idea that she’ll separate Matthew and Mary (as if Matthew wasn’t doing a good enough job of that on his own). First thought: what were Lavinia and Sir Richard getting up to while that car was “stuck in the mud,” eh? I don’t trust her. She has horrible fashion sense and she’s a spineless idiot. This woman is going to be the next Lady Grantham? NO. Where on earth did Matthew find her?

Lord Grantham, meanwhile, wasn’t let onto this meddling with Mary and Matthew’s romance, and does not approve. Grantham has better instincts than his wife does–now Sir Richard is threatening Lady Mary. He likes to control things, apparently. He’ll be fun to live with. Wake up, Mary!

Meanwhile, the Canadian Patient left in the middle of night. Actually morning, but Edith wasn’t up yet. He decided “It was too difficult.” Well, I guess that puts an end to that.

Ceremonial end to the war! Kind of a weird thing to do, but I guess it works. Are you relieved? I’m relieved. Matthew is much more with the frowny face now. But then… MATTHEW FELT SOMETHING! HE CAN WALK!!!! I knewwwww it. You can’t keep a good man down. And Lavinia’s such a bitch for letting someone else roll Matthew through Downton. Lady Mary wouldn’t just roll him through the house, but along a sandy beach as well.

*GASP!* Bates’ wife is dead! What… just… happened. Did O’Brien kill Vampy Vera??? DID ANNA? Imagine if Anna wound up in the hoosegow for murder. That would be tragic, yet in keeping with this couple’s luck so far. 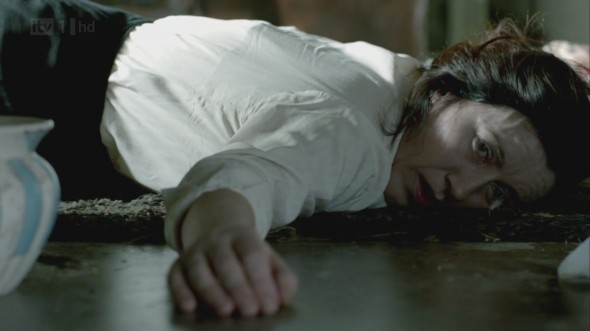 This episode ended on some serious cliff hangers. I can’t wait to find out who killed Vera and how. I also can’t wait for le moment dramatique when Matthew stands up and reveals he can WALK! You know that’s coming.