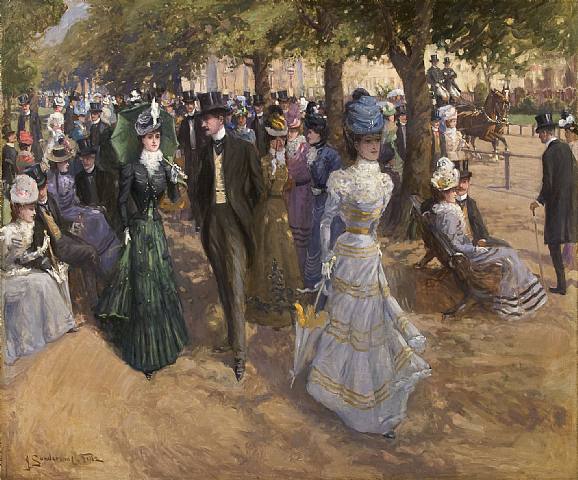 As regards the recognition of friends or acquaintances, it is the privilege of a lady to take the initiative, by being the first to bow. A gentleman should not raise his hat to a lady until she has accorded him this mark of recognition, although the act of bowing is a simultaneous action on the part of both lady and gentleman, as a lady would hardly bestow a bow upon a gentleman not prepared to return it.
The bow between intimate acquaintances takes the character, when given by a lady, of a familiar nod in place of a stiff bow.

When a gentleman returns the bow of a lady he should do so by distinctly taking his hat off and as quickly replacing it, not merely raising it slightly, as formerly, and if he is an intimate acquaintance or friend, he should act in a similar manner.
In France and on the Continent generally, the rule of bowing is reversed, and the gentleman is the first to bow to the lady, instead of the lady to the gentleman.
Between ladies but slightly acquainted, the one of highest rank should be the first to bow to the other; between ladies of equal rank it is immaterial which of the two bows first.

A lady should not bow to persons only known to her by sight, although she may frequently have seen them in the company of her friends.

A lady should bow to a gentleman, either a friend or acquaintance, even when he is walking with either a lady or gentleman, with whom she is unacquainted.

Gentlemen do not raise their hats in recognition of each other, but simply nod, when not walking with ladies, save when a vast difference exists in rank or age.

When a gentleman meets another—a friend of his— walking with a lady or ladies, with whom he himself is unacquainted, he should raise his hat and look straight before him, not at the lady or ladies.

A lady should not bow to another who, being a stranger to her, has addressed a few remarks to her at an afternoon party, as the fact of meeting at the house of a mutual friend does not constitute an acquaintanceship, and does not authorise a future bowing acquaintance.

Ladies, as a rule, are not too ready to bow to those whom they have merely conversed with in a casual way. In the first place, they are not quite certain of being remembered, and nothing is more disconcerting and disagreeable than to bow to a person who does not return it through forgetfulness of the one who has given it, or through shortsightedness, or through actual intention. Short-sighted people are always offending in the matter of not bowing, and almost every third person, comparatively speaking, complains of being more or less short-sighted; thus it behooves ladies to discover for themselves the strength and length of sight possessed by their new acquaintances, or the chances are that their bow may never be returned, or they may continue to labour under the impression that they have received a cut direct; thus many pleasant acquaintances are lost through this misapprehension, and many erroneous impressions created.

A bowing acquaintance is a difficult and tiresome one to maintain for any length of time, when opportunities do not arise for increasing it The irksomeness of keeping it up is principally experienced by persons meeting day after day in the Park or on public promenades, riding, driving, or walking, more especially when it is tacitly understood that the acquaintance should not develop into a further acquaintance.

It would be considered discourteous to discontinue a bowing acquaintance which has once been commenced.

To know a gentleman by sight through having frequently seen him at balls and parties, does not give a lady the right to bow to him, even though she may have stood beside him for some twenty minutes or so on a crowded staircase, and may have received some slight civility from him.

A lady who has received a little service from a stranger would gladly acknowledge it at any subsequent meeting by a pleasant bow, but as bowing to a gentleman argues an acquaintance with him, and as in such cases as these an acquaintance does not exist, etiquette provides no compromise in the matter. Therefore, if a young lady takes her own line, and rather than appear ungracious bows to a gentleman who has not been introduced to her either directly or indirectly, it is a breach of etiquette on her part; and as to do an unconventional thing is not desirable, the innumerable little services which ladies receive in general society are not further acknowledged beyond the thanks expressed at the moment of their being received.

Bows vary materially: there is the friendly bow, the distant bow, the ceremonious bow, the deferential bow, the familiar bow, the reluctant bow, and so on, according to the feelings that actuate individuals in their intercourse with each other.
When a bowing acquaintance only exists between ladies and gentlemen, and they meet perhaps two or three times during the day, and are not sufficiently intimate to speak, they do not usually bow more than once, when thus meeting in park or promenade.

— Manners and Rules of Good Society: or, Solecisms to be Avoided (1913)

7 thoughts on “The Etiquette of Bowing”