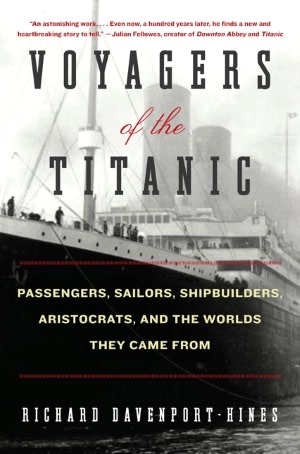 One hundred years after the tragedy, many feel there is nothing left to be said about the Titanic, that every aspect of the ship, its passengers, and its sinking has been exhausted. While this may be true, the spate of books released this year hope to test that opinion, and I’d say that Richard Davenport-Hines’ Voyagers of the Titanic does its best to convince readers otherwise.

Voyagers of the Titanic tells the tale from a myriad of angles, beginning with the ship’s origins, and ending with the fate of the iceberg which sealed the RMS Titanic’s fate. Sandwiched between is a richly-detailed portrait of an age where wealth seemed endless and power forever in the hands of aristocratic Anglo-Saxons. If you’re a Titanic buff, or have read the multitude of books released in the mid-90s in the wake of James Cameron’s Titanic, Davenport-Hines does not uncover anything new or untapped; however, his elegant prose does make the narrative sprightly and engaging.

I consider the section about the second class passengers the most interesting, for this class–essentially made up of gradations of the typical Anglo-American middle class–is often neglected in the rush to frame the sinking as a matter of rich vs poor (or bourgeoisie vs proletariat). The issues I had with this book is that after a while, Davenport-Hines seemed to gorge on the lavish details of the Edwardian and Gilded Age, and the description became overwhelming and overdone. Also, in stuffing the book with snapshots of nearly every person on the boat, humanity and emotions were nearly erased from the text, and the recitation of their lives and deaths were just as hurriedly impersonal as the slightly distasteful (to me at least) inclusion of the photograph of a victim’s body being embalmed on the decks of the Minia.

For those newly interested in the ship, its passengers, and its sinking, this is a solid place to begin reading, though I feel longtime Titanic aficionados may be frustrated by its redundancy to their libraries.

FTC Disclosure: The book was provided by the publisher

10 replies on “REVIEW & GIVEAWAY: Voyagers of the Titanic by Richard Davenport-Hines”