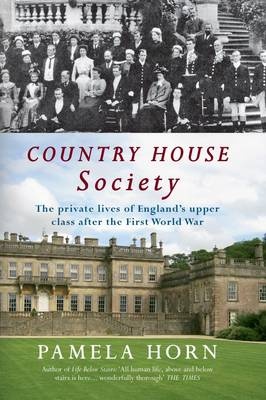 FTC Disclosure: this book was sent by the publisher

The late social historian Pamela Horn is in top form with her final release, Country House Society: The Private Lives of England’s Upper Class After the First World War. I own a number of Dr. Horn’s books, and prize them for her thoroughness, her compulsively readable prose, and her unerring ability to let primary sources (letters, diaries, memoirs, articles) speak through her writing. Country House Society is no different–in six lengthy chapters, Horn takes us through the swift changes to English high society in the wake of the Great War.

Though many hoped to turn the clock backwards to 1914, the carnage and destruction of the war proved to be a point of no return for both aristocrats and the people who served them. I winced a bit while reading about the crippling costs of the great landed estates:

A very interesting section of the book deals with the General Strike of 1926, where young men arrived from Oxford and Cambridge and debutantes set aside their ballgowns to became “scabs” when 1.7 million workers in the transport and heavy industries set down their tools. The irony of how willing the aristocrats were to pitch in to keep the country running is that this very action further marginalized the working classes once the strike ended. Furthermore, beneath the “froth” of the chapters devoted to the London Season and other social pursuits, there lurked the frenetic melancholy and unease of both the Edwardians and their Bright Young Thing offspring that lingered from WWI. Horn does not fail to present a biting, yet balanced portrait of the hedonistic coterie of upper class men and women who took their fun a bit too far. Though Country House Society does discuss life in the 1930s, the focus is mostly on the 1920s, before the Wall Street Crash and the rise of Hitler made frivolity and selfishness appear in poor taste. Accompanying the text are 16 pages of fantastic photographs and period illustrations.

This is book is of course perfect for Downton Abbey fans, but fans of British social history will love this book even more.