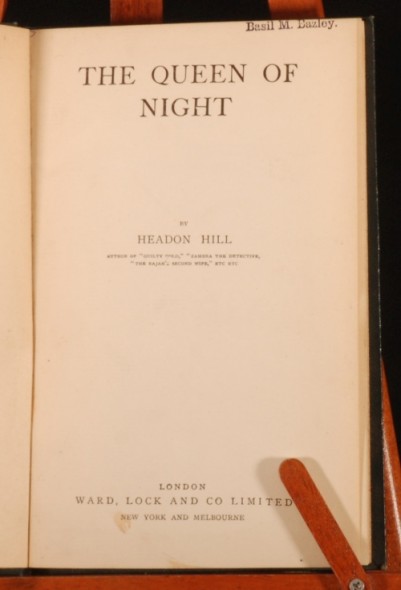 Some months ago a young man who represented himself to be an unpublished English author in sore straits submitted a manuscript to G.P. Putnam’s Sons. After the usual formalities the work was accepted. The author desired that his name should appear upon the title page as “George L. Myers.” The book was recently brought out bearing the title of “Aboard the American Duchess.” Before many days had elapsed after issue the publishers were informed that “Aboard the American Duchess” was in reality identical with “The Queen of Night,” a novel written by Mr. Headon Hill and published in London, save that “Mr. Myers” had changed the scene of action to New York. Thereupon the publishers sent an honorarium with explanations to Mr. Hill, who is well known in England and Australia as the author of “Guilty Gold,” “Zambra, the Detection,” and “The Rajah’s Second Wife.” “The Queen of the Night” is not copyrighted in this country, so Mr. Hill will probably feel gratified when he receives the unexpected message. The publishers have also issued the following notices that the American version of the novel may not be purchased under a misapprehension:

“G. P. Putnam’s Sons regret to have occasion to announce to the reading public that the story recently published by them under the title of ‘Aboard the American Duchess,’ a story purporting to be the work of an American author who writes under the name of George L. Myers, is a plagiarism of a story published some years back by Headon Hill, of London, entitled, ‘The Queen of Night.’ Mr. Hill’s material has been appropriated by the American writer, such appropriation constituting a wrong against the English author and his publishers, and also, of course, the American publishers, who accepted as an original work the story ‘The American Duchess.’ The publishers are making this announcement in order to caution American readers against the purchase under a wrong impression, of the story issued under the title of ‘Aboard the American Duchess.'”

So do you feel the claims of plagiarism bear true? Who do you think ratted “Mr. Myers” out? And more importantly, what do you think happened to Myers?

4 replies on “A Curious Case of Plagiarism”