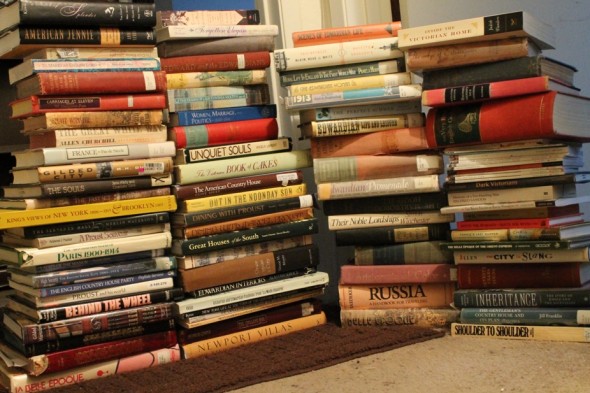 Taking a cue from the owner of the Julian Fellowes’ Titanic fanpage, as well as the number of lists recommending Downton Abbey/Edwardian/WWI-themed books (and stay tuned for the list Melody and I are curating), I decided it was a great time to brag about display my research library. This, my readers, is the result of nearly eight years of my Edwardian obsession that began when I was in my very early twenties–and I haven’t even taken pictures of my stash of Baedeker and Murray travel guides from the early 1900s (or…*gulp* the number of e-books on my hard drive)! Granted, this is nothing compared to some of the various collections I’ve seen–and drooled over–belonging to historians or costumers or hobbyists, so I’m always finding excuses to buy more books.

To give a general overview of this massive stack of books:

My advice for anyone wanting to build their own research library–on any topic–is to search for general overviews first (and these tend to be less expensive than specialized titles), look through the bibliographies of those books you find most useful, and then shop around for the best price (and check to see if some of those titles are in the public domain). I’ve let some highly coveted books go because I didn’t feel they were worth the high prices, and then months or even a year or two down the road, I find a much cheaper copy! And remember, this is years worth of collecting–don’t feel pressured to buy everything at once (I did that the first year and my wallet howled).

24 thoughts on “Books, Books, and More Books, or my Edwardian Research Library”