For once I’m glad this installment of Downton Abbey is only an hour, because I don’t think I could handle a 2-hour one this week. Anyway, I wonder what Thomas and O’Brien are going to be up to. 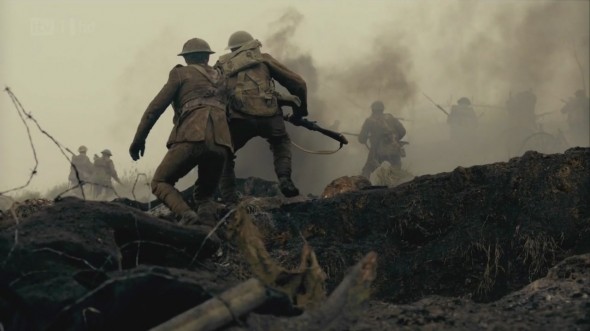 We’re in France! Vive la France! Shouldn’t the Americans be riding in to save the day soon? The guns blaze and there are explosions and Mary suddenly feels terribly cold. Daisy also felt a chill. That’s not a good sign! Sure enough, Matthew is injured. The expression on Lord Grantham’s face indicates that it’s not a scratch, either. William is injured too, apparently, and Lady Violet wants him to be taken care of at Downton Hospital, but the doctor/military guy won’t let her. Bureaucratic BS! But Thomas isn’t going to stand for that crap! He’s going to Do Something (but probably not).

Anna shares the news of the injuries with Bates. I’ve never seen a guy look so cute in an apron. They go to a church to pray about this and talk about their wedding. THEY ARE SO CUTE TOGETHER.

Daisy’s ashamed she deceived William about her feelings. She should be. Vampy Vera chooses that moment to slither into the Abbey kitchens. She calls Anna a floozy! And she’s going to tell the WORLD about Lady Mary’s indiscretions because she can’t stand seeing Bates happy. Naturally, Thomas and O’Brien are the ones who called her in, but now O’Brien realizes Bates was protecting the Granthams and she’s fully annoyed.

Meanwhile, in the haven for sanity that’s Branson’s garage (great name for a bar, btw), Sybil has decided she needs to be chauffeured somewhere. Branson’s conversational gambit is, “Hey, isn’t Mary in love with Matthew?” That’s not well-played, is it? Yeah, that’s right, Branson, rich people have feelings too! 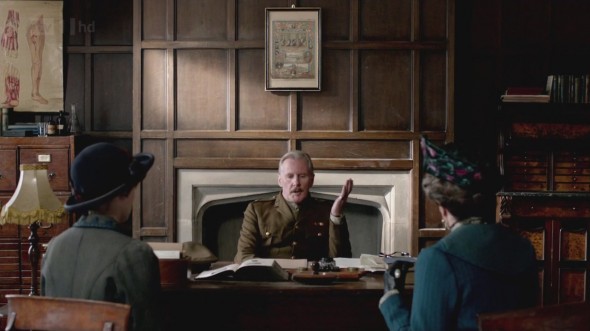 Lady Violet and Edith go to visit William. The prognosis is death. 🙁 Since he’s going to die anyway, Lady Violet asks if they can take him back to Downton. William’s father is there as well and doesn’t seem to have heard about the prognosis.

At Downton, Matthew has arrived. The doc warns Mary that his condition will be “very distressing.” Again, not a good sign! He looks like a zombie extra Shaun of the Dead. His back looks like ground meat, and it turns out his spine is damaged. Matthew may never walk again, nor even do the horizontal dance. THE HORROR! Well, at least he’s not dying upstairs like William is.

Meanwhile, William gets his own room. POOR WILLIAM. I knew he was going to kick the bucket. Don’t they have like inhalers or something in this time period? Mrs. Pattmore continues to bully Daisy into pretending feelings for William. How long is this going to go on for? I’m going to guess until they’re married. Just listen to Mrs. Pattmore, Daisy, she’s smarter than you are.

Lavinia’s here. Is she still around? Matthew greets her with, “My darling.” Excuse me while I go puke.

Mrs. Hughes is helping out Ethel, because she’s nice like that. The Major is back in town and Ethel’s all, “Reunion! I bet he wants to see the baby!” OMG, this woman’s an idiot. Stupidly, Mrs. Hughes agrees to encourage this by passing along Ethel’s messages to the Major, but–shockingly!–he’s a dick. Wah-wah. Back at Downton Hospital, Matthew has the grace to ask about William, and his own legs, which he cannot move. He bullies Mary into breaking the news that he won’t walk again. Hey, you know what situations like this call for? Tea!

Lady Mary has decided to tell Sir Richard about the Turkish Diplomat Incident to foil Vera. He’s really a bastard about the whole thing. His lips say, “blah blah blah,” but his dancing eyes say, “I’ll enjoy holding this over your head for THE REST OF YOUR LIFE, you tramp. Thanks!”

Matthew breaks the news to Lavinia that they can’t be married–not properly. IF YOU GET MY MEANING. Did he just want to marry her so he could get under her skirts? Maybe they will get married and then she’ll take a lover and become the inspiration for Lady Chatterly’s Lover.

Paradoxically, now Sybil has decided to share gossip with Branson, but he’s been reading the Edwardian equivalent of MSNBC and is distracted by the fact that the Tsar and his family have been executed. I thought that was a secret execution? And why does Sybil always look as if her shirts are about to fall off her shoulders? Especially when she’s around Branson, haha. Methinks he’s making inroads with that one. Or not. There’s A Moment, she runs away.

Vampy Vera shows up at Sir Richard’s office to spill the beans on Mary’s virginity. Maybe she and Sir Richard should get together! They have very similar personalities.

Now Mrs. Hughes is bullying Daisy to marrying Will, as well. Poor poor William knows he’s dying, and he knows that if Daisy marries him she’ll get his pension. ZOMG, this episode is AWFUL, I can’t STAND it. Then even Lady Violet gets in on the act and bullies the pastor into marrying them. And whoa, no one does bullying like she does! “May I remind you your living is Lord Grantham’s gift?” *smile*

Lavinia is staying at Downton. There’s something so wrong about that. She tells Mary that Matthew can never have the sexytimes again. How convenient that you told that to Mary, your obvious rival, Lavinia!

Meanwhile, Sir Richard hasn’t wasted time and posted an announcement of their engagement. Uhg, can’t Vampy Vera kill him off or something? And is it just me or is Mary visibly aging during the course of this episode? Well, you may have foiled Vera this time, but she’ll be back! And don’t even think it’s over for Bates! Mwahahahaha. *exists stage left in a swirl of evil smoke* 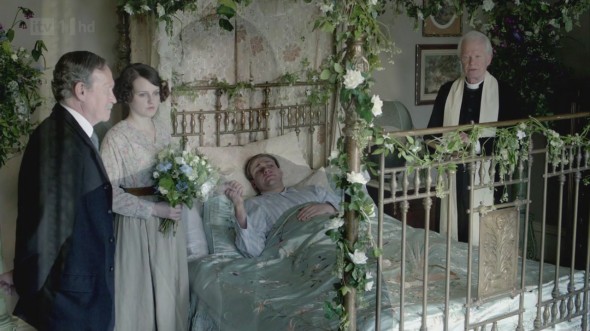 Daisy and Will’s wedding! This scene is going to make me cry, I just know it. EVEN LADY VIOLET IS CRYING!!!! Worst. Episode. Ever. At least the bed looks nice. Daisy looks very pretty, as well.

Mary and Matthew are being spared all this drama in favor of their own problems. He’s expounding on why he can’t possibly marry Lavinia–or ANY woman–because of the lack of the sexytimes. “And if they should just want to be with you? On any terms?” Mary says, not talking about herself at all. But Matthew is in too much of a shame spiral to notice how she’s clearly not referring to herself. “I turned you down, now look at me… Impotent, crippled, and stinking of sick. What a reversal!” Matthew, are you implying Mary was puke-worthy when you broke off your engagement? Oh, good, mummy’s here to put up with your whining from now on.

Lady Mary gives Bates the heads up that their plan to foil Vampy Vera has worked. Everything in Bates’ and Anna’s garden is rosey now, but not in Mary’s. Can’t everyone’s garden be rosey?

William’s dead. I feel like I’ve spent an hour being punched in the gut. Feel free to cheer the eff up next week, Downton, for realz.