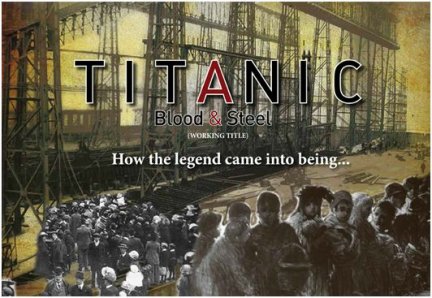 News of Julian Fellowes’ Titanic mini-series for ITV was met with much fanfare and discussion, but the BBC had also quietly commissioned its own 12 part mini-series, this time focusing on the actual construction of the R.M.S. Titanic from 1897 to its maiden voyage in 1912. Titanic: Blood & Steel is produced by Guido deAngelis and directed by Ciarán Donnelly (The Tudors, Cold Feet) and co-producer, by Paul Myler of Epos Films. Cast members (both confirmed and unconfirmed) include James Gandolfini as J.P. Morgan, Kevin Zegers as Mark Muir, and Ophelia Lovibond as Kitty Carlton. More information at IMDb and The Irish Film and Television Network.

Update: Chris Noth (Sex and the City, Law & Order) has been cast as J. P. Morgan!
10/4 Update: Rumor is that the BBC won’t be airing this mini-series next year.