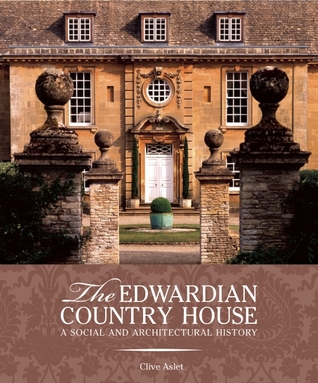 When I was offered this title for review, I leaped at the chance to read it as I consider Aslet’s books on architecture and interiors to be utterly sublime. I frequently reference my tattered copy of The American Country House when I want to get a glimpse of the wealthy on my side of the pond, and I was sure The Edwardian Country House would be just as excellent a read. Aslet’s focus isn’t strictly on the Edwardian era, but chronicles the epoch of the manor house–during the Edwardian era–and its subsequent decline, ending in 1939.

To help us understand why the Edwardian country house differed from the 19th century, Aslet takes us on a careful journey through society, the countryside, and the upstairs/downstairs world. Because the focus of the book is the role of the country house, Aslet presents all of this in a fresh and intriguing manner, first by examining why the 19th and 20th century country houses were constructed the way they were, and secondly by examining the architects chosen to design and build these great houses. Aslet includes plenty of floorplans, paintings, advertisements, and photographs of the houses he singles out, which creates a highly textured reading experience. If someone like me, who has studied the Edwardian era for years, is constantly surprised by Aslet’s revelations, then I could this a thoroughly satisfying book.

The second half of The Edwardian Country House moves into the interwar years, and though there are less anecdotes of the families and servants who resided in these estates during the 1920s and 1930s, it is perhaps fitting that the emphasis remains on the houses. After all, the scope and scale of entertainment of the early 1900s, as well as the power imbued by landownership, had virtually disappeared. The last two chapters deal with the aesthetics of the country house– decoration and the garden–and the lavish illustrations and photographs make them a feast for the eyes.

Part social history, part architectural history, and part coffee-table book, The Edwardian Country House, satisfies the eyes and the mind. Aslet’s writing is engaging and informative, and is never stuffy or dull even when detailing every detail of a particular country house. This is a perfect book for the armchair travelers out there, for it sets a deep sense of place in the English countryside, and for those of you deeply curious about Downton Abbey (or rather Highclere Castle’s) importance to the land in the pre-war years, this is definitely highly recommended.

Purchase from Amazon or B&N

4 thoughts on “Review: The Edwardian Country House by Clive Aslet”