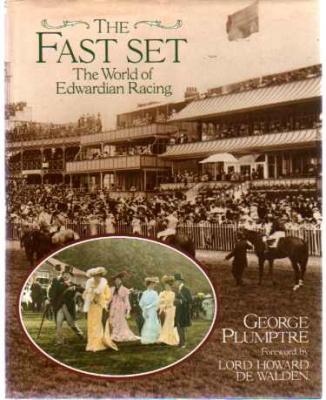 This is one of those slim, but incredibly informative books that focus on a particular facet of Edwardian life. I don’t recall how I stumbled upon this book, but I am a fan of horse racing, and The Fast Set gives a very entertaining look at Victorian and Edwardian racing society.

Though considered the sport of kings–and of course Edward VII led the way–, and many high society events were built around horses and racing, it nonetheless retained a slightly raffish air. In fact, the races were one of the very few areas where royals and peers mingled with commoners, as well as bookies, prostitutes, and gamblers. So horse-mad was Edward’s circle, vast sums of money were sunk into horses and bets, and many of his friends lost their fortunes on the racetracks of the Derby or Newmarket.

By the 1870s, the influence of the Jockey Club (est 1750) strengthened over the governance and regulation of the sport, and they made an effort to suppress scandal or scams by penalizing any jockey or official who took part in an “unrecognized” meeting. Now everyone–trainers, jockeys, officials, and even racecourses–had to obtain a license to participate in the racing calendar. Plumptre includes plenty of anecdotes surrounding some of the racing set’s most infamous characters, ranging from the “Yellow Earl” (Lonsdale) to money-lender Sam Lewis to Lillie Langtry, who flouted Society’s dictum by running a stud and racing her own horses under the name “Mr. Jersey.” Scandal abounded despite the Jockey Club’s iron grip, and some of the stories remain a trifle jaw-dropping.

Though I do really like this book, its only downside is the tight focus on the upper classes. As stated above, the races were a somewhat democratic social event, and though Plumptre does devote a section of a chapter to the railways and their fostering this mingling of classes, the middle, lower, and working classes are secondary to earls and marchionesses and kings. Nevertheless, The Fast Set: The World of Edwardian Racing is a great read and does much to expand the world of Edwardian society.

One reply on “Friday Reads: The Fast Set: The World of Edwardian Racing by George Plumptre”