Illustrator Joyce Dennys and humorist Gordon Hampden collaborated on two books of humorous war time poetry. Dennys (1893-1991) was a V.A.D. during the Great War, and her role became a point of inspiration: 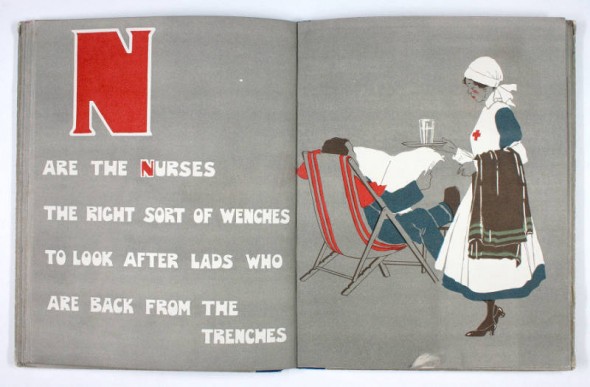 The Voluntary Aid Detachment started in 1909 when the War Office placed on the British Red Cross responsibility for forming and training VADs in every county to provide additional aid to the territorial medical service to meet the needs of war. Detachments were also formed by the Order of St. John and St. Andrews’ Ambulance Brigade in Scotland. The VADs were made up of both men and women who gave their time voluntarily and who underwent a detailed training programme including lectures and practical field days.

To qualify for VAD membership, women had to pass first aid and nursing qualifications and men first aid qualifications. These examinations had to be regularly renewed. In March of 1911, a uniform was introduced and on qualifying as a British Red Cross VAD, a new member would be permitted to sew the distinctive Red Cross emblem onto her apron and later onto her head veil. Although the VAD scheme was originally intended to provide voluntary aid in times of war, it was soon realised that practical experience was necessary and VADs began to help in hospitals and dispensaries during peace time.

The first public first aid duty was carried out at the Coronation of King George V when “Red Cross squads” were stationed along portions of the route. The First World War saw the VADs fully mobilised and carrying out duties both at home and abroad. Amongst their functions were the transportation of the wounded, the supervision of dressing stations, cooking and nursing duties in both military and auxiliary hospitals. By the Armistice, there were over 90,000 British Red Cross VADs and a tradition of voluntary service with the Red Cross that continues to this day was well and truly established.

Joyce Dennys served with the Budleigh Salterton Auxiliary Hospital, which contained some twenty beds, from December 1914 until December 1915 and then served at the Number Two Military Hospital in Exeter, which had some 220 beds, from January to October 1916. Before the war started, Joyce was attending an art school in London and it was around 1915 that the publishers, John Lane The Bodley Head, commissioned her to draw the pictures for “Our Hospital ABC” with verses by Hampden Gordon and M.C. Tindall.

This was followed by “Our Girls in Wartime”, with rhymes once again by Hampden Gordon. Joyce Dennys: service at Budleigh Salterton was at a small hospital used at first for the men of the local garrison and then used exclusively for the men of the Expeditionary Force. The hospital building was lent free by ColoneL M. Barton, RE, DSO and was situated on the high ground overlooking the sea. The Number Two hospital at Exeter was one of five hospitals in and around Exeter which were used for military purposes.

The wonderful images that Joyce Dennys drew for the two books are all caricatures and were drawn from what she had seen in and around the Devon hospitals and from life in the great metropolis. From March to September 1917 she was on the staff at Devonshire House which was the office from which all VAD administration was carried out. It was during this period that she must have visited the County of Cornwall Royal Naval Auxiliary Hospital, Truro. The hospital, with 150 beds, was located in the Truro workhouse, a roomy well-ventilated building standing on a healthy, open site. a mile out of the city.

The preparation of the hospital involved the removal of the inmates, the installation of gas which entailed the laying of over half a mile of main, many structural additions and alterations, and the furnishing of the entire hospital and nurses’ home. The nurses’ home accommodated some forty members of the nursing and VAD staff, each having a separate curtained cubicle. Joyce Dennys, on visiting the hospital, recorded in one album some thirty one drawings in pastel and gouache; they were all unsigned. These drawings all came into my possession some years ago and after much research with the help of the British Red Cross Archivist, Helen Pugh, we were able to determine the identity of the artist as Joyce Dennys. All the drawings were illustrative caricatures, yet all are of actual personnel at the hospital, some of whom appear two or three times in the collection. They are a delightful historical reminder of the very special inmates and their very special nurses. [Source]