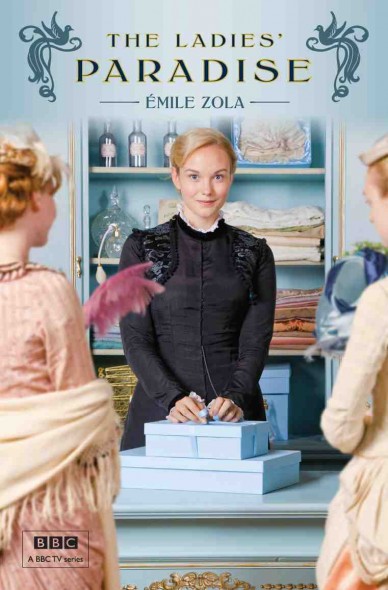 I’m reading the Kindle Version, hence the percentage instead of page numbers, so if you’d like to read along with that version, it can be purchased here. Otherwise, you can find cheap editions at your local used bookstore, borrow a copy from your library, or read online for free with Project Gutenberg!

The Ladies Paradise (Au Bonheur des Dames) is part of Emile Zola’s Rougon-Macquart series, which chronicled the lives of two families during Emperor Louis-Napoleon’s Second French Empire, which lasted from 1852-1870. Paris of this era underwent a massive upheaval, changing from its cramped and poky medieval appearance to an incredibly modern hub of the nineteenth century. Just about everything you see in today’s Paris–the grand boulevards, the architecture, the huge shops–were founded during this short-lived empire. The rapid change was very much like what was happening in the capitals of other great nations, which struck terror in the hearts of many who feared the loss of the old ways forever and the dominance of plutocrats, rising by leaps and bounds after harnessing the latest technological advances for greater exploitation of business and labor.

Which is what The Ladies Paradise chronicles in a delightful and romantic, yet slightly satirical fashion.

In chapter one, we meet most of the major players–and the major set: the opulent and dazzling department store, The Ladies Paradise. Denise Baudet (20) arrives in Paris with her brothers Jean (16) and Pepe (5) after the death of their parents from fever. A year ago, their Uncle Baudet wrote a letter of condolence, asking them to come live with him, but when they do show up, circumstances have changed drastically. Uncle Baudet owns Au Viel Elbeuf, drapery and flannels, which is located directly across from The Ladies Paradise. Naturally, business is very bad, as it is for the other shopowners lining the Reu de la Michodiere.

Denise and her brothers are mesmerized by the window display of The Ladies Paradise and by the heaps of inexpensive goods placed just outside the door of the department store to attract customers. In contrast, Uncle Baudet’s drapery shop is “crushed by a low ceiling, topped by a very low mezzanine floor, with prison-like half-moon shaped windows. To the right and left, woodwork of the same color as the signboard–bottle green, shaded by time with ochre and pitch–surrounded deep-set windows, black and dusty, in which the heaped-up goods could hardly be seen. The door, which was ajar, seemed to lead into the dank gloom of a cellar.” (The Ladies Paradise, 7%)

Inside, they meet Uncle Baudet’s colorless wife Elizabeth and his equally colorless daughter, Genevieve, who is engaged to Colomban, the first assistant (this is a tradition within the trade, and is how Denise’s uncle became owner of the shop). The interior is just as gloomy as the exterior–“a low ceiling blackened with smoke, oak counters shiny with use, ancient show-cases with strong iron hinges…the smell of cloth and dyes, a sharp chemical smell, seemed to be intensified by the dampness of the floorboards.” (The Ladies Paradise, 7%)

There is no work for Denise, who had experience working in a drapery establishment, and when Uncle Baudet takes her around to look into openings in neighboring shops, matters are little better. In fact, the first establishment they visit sees an employee of The Ladies Paradise in deep discussion with the owner over selling the premises to the department store. Uncle Baudet is infuriated and rants about the dominance of the department stores over small businesses (sounds familiar, doesn’t it?). The suggestion that Denise apply for a position at The Ladies Paradise strengthens the draw the store has for her; Zola cleverly couches the pull of TLP on Denise as a “seduction.” (The Ladies Paradise, 9%)

We are then treated to the backstory of The Ladies Paradise and its alluring owner, Octave Mouret. An adventurer, he is called, who married the widow Caroline Hedouin, who was the daughter of one of the store’s founders. Upon her death–she fell into a hole on the site of TLP as it was being built, gave Mouret sole proprietorship of the magnificent department store. Uncle Baudu rants again, this time about Mouret’s plans for expansion and how much money he’s sunk into his enterprise, as well as the outrageous practice of inviting his employees to invest their savings into the business. He is particular infuriated that these new department stores were “massacring each other in their struggle for existence, destroying all family ties in the process.” (The Ladies Paradise, 10%) The tactics used by these stores–slashing prices, holding massive sales, expanding into departments previously held by individual shops, a willingness to run on slim profit margins, opulent advertising–were characterized as confidence tricks, as a scourge and a plague.

Yes, that all does sound very familiar!

Unfortunately, capitalism prevails. Denise must work to support herself and her brother Pepe (Jean being hired by an ivory carver in Paris is one of the catalysts for them leaving the countryside [the other is her very handsome brother’s liaison with the daughter of a local nobleman]), and The Ladies Paradise beckons.

Visit Tasha’s blog next week for a look at chapter two!

10 thoughts on “The Ladies Paradise by Emile Zola Readalong: Chapter 1”