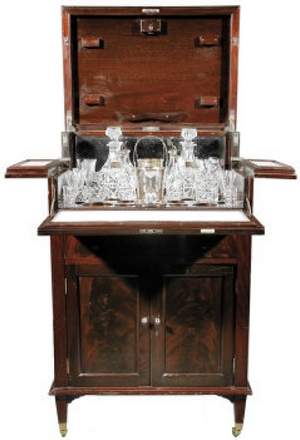 It isn’t easy to find an Edwardian drinks cabinet, so this one, labeled with the name of a well-known English company, Mappin & Webb, brought $7,380 at Neal Auction Co. in New Orleans. Inside the top section were an ice bucket, cocktail shaker, decanters, glasses and other utensils. Bottles were behind the lower cabinet doors.

Drinks before or after dinner have been part of the ritual of dining in America since the 1800s. By then, the wealthy lived in houses that had a dining room, living room and perhaps a parlor or library.

Men and women enjoyed “4 o’clock tea” during Victorian times, but it was usually a ladies’ get-together. After a dinner party, however, it was customary for the men to go to the library for brandy and cigars.

In the 1700s, alcoholic drinks were served to everyone. It was the safest thing to drink; clean water was not always available.

In the years since, there have been times when drinking was an important part of social events and times when it was illegal.

Through all of these years, furniture, decanters, glasses and other things were made to use when serving drinks.

Some dining-room sideboards in the early 1800s had a closed section deep enough to hold a bottle of wine or brandy to serve at dinner. In Victorian times, bottles and glasses often were kept on a tabletop or inside a closed cabinet.

Closed cabinets with hidden sections for bottles and glasses were popular after 1900. They often were made in a formal style from an earlier period. The end of Prohibition in 1933 brought whiskey out of hiding and back onto the table.

By the 1950s, drinks often were served from a built-in bar in the recreation room. [Source]

3 replies on “An Edwardian Drinks Cabinet”