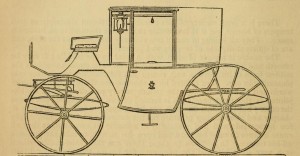 Double Broughams are generally drawn by a pair of horses; they have two seats and hold four inside, but are more comfortable with three. 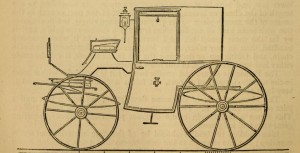 Single Broughams have but one seat and hold two inside; they may be drawn by either one horse or two smaller ones.

The Waggonette is an open door carriage opening behind with a door; it will hold either four or six. It generally will require a pair of horses to draw it comfortably. It is a useful family carriage, and is often made with a hood to take on and off to suit all weathers.

The Canoe Waggonette has an entrance on each side behind the box and will hold six, who sit in a semicircle ’round the back from one door to the other.

The Victoria is the most modern and stylish of all light open carriages. They are intended to carry two only, but are occasionally made on a larger scale, with two seats, to carry four. In the latter case they require a pair of horses. 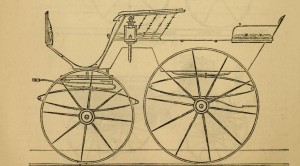 The Park-driving Phaeton or T cart is light and stylish carriage for one or two horses.

The Gig or Buggy, is a two-wheeled carriage for one horse. They are out of fashion in town, but are still used in the country.

The Dog Cart is a two-wheeled carriage, to carry either two or four; the seats are placed back to back.