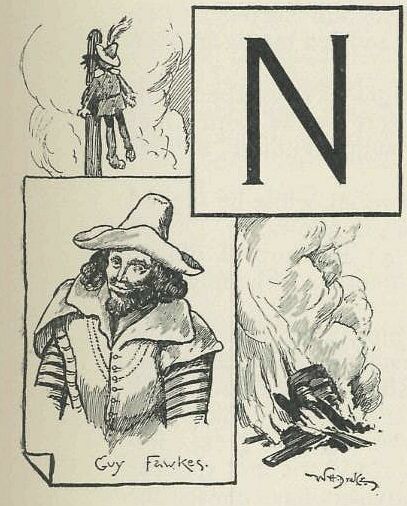 Now November was upon us, and we had kept All-hallow-mas, with roasting of skewered apples (like so many shuttlecocks), and after that the day of Fawkes, as became good Protestants, with merry bonfires and burned batatas, and plenty of good feeding in honor of our religion…

Guy Fawkes Day, or Pope Day, as it was called in Puritan New England, has been kept as an anniversary since 1605, when the Gunpowder plot was discovered the night before it was to have been executed. The design of the conspirators was to blow up Parliament, in which King James I, the Prince of Wales and the lords and commoners were assembled. Ten days before Parliament met, one of the conspirators, hoping to save Lord Monteagle, sent an anonymous letter of warning: “the danger is past, so soon as you have burnt the letter.”

Though others scoffed at the letter, King James, a shrewd man, interpreted the phrase “so soon as you have burnt the letter,” and “that they should receive a terrible blow, this parliament, and yet should not see hurt them,” he concluded that some sudden blow was preparing by means of gunpowder. Accordingly, all the rooms and cellars under the Parliament were searched. Nothing was discovered, but it was resolved on November 4th, that a search of the premises would commence at midnight. In the midst of the search, Sir Thomas Knevet discovered a man in a cloak and boots, whom he apprehended. This was Guy Fawkes. Besides Fawkes, thirty-six barrels of gunpowder were discovered and on Fawkes’ person, there were found upon him, a dark lantern, a tinder-box, and three matches.

Instead of showing fear, Fawkes boldly declared that if he had been taken within the cellar, he would have blown up himself and them together. In effort to have the names of his co-conspirators m ade known, he was tortured over the next few days. For three or four days Fawkes said nothing, nor divulged the names of his co-conspirators. Only when he found out that they had proclaimed themselves by appearing in arms did he succumb. The torture only revealed the names of those conspirators who were already dead or whose names were known to the authorities. Some had fled to Dunchurch, Warwickshire, where they were killed or captured.

On 31 January, Fawkes and a number of others implicated in the conspiracy were tried in Westminster Hall. After being found guilty, they were taken to Old Palace Yard in Westminster and St Paul’s Yard, where they were hanged, drawn and quartered.

During Guy Fawkes Day, straw-stuffed effigies of the “guy” are carried by boys and men about the streets on chairs or trestles supported by two poles, like a sedan chair. Some are life-size effigies, and they are dressed in tawdry finery, with a mask or false-face topped by a three-cornered cocked hat. They go from house to house, attended by troops of admiring urchins, stopping from time to time to sing or chant:

Please to remember the fifth of November,
The gunpowder treason and plot,
I see no reason why Gunpowder treason,
should ever be forgot.
Hip, Hip, Hurrah!

The boys also repeat the appeal “Please to remember the guy” or “Please remember the fire!” soliciting gifts of pennies or firewood. The money goes to buy fireworks, and the wood goes to the fire; for at night the “guy” as the effigy is called (whence our work meaning a grotesque figure of any sort) is burned in an immense bonfire, the bigger the better, to the accompaniment of a fusillade of fireworks.

During WWI, Guy Fawkes Day was suspended, as regulations bound up with national defense made a discharge of a squib or the soaring of a rocket a serious offense. Tradition in returned after the war. During the war, the effigies were of Kaiser Wilhelm, whereas curiously after the Armistice, effigies abounded in the form of a scarecrow named “Pussyfoot.”

0 replies on “Remember, Remember, the Fifth of November”