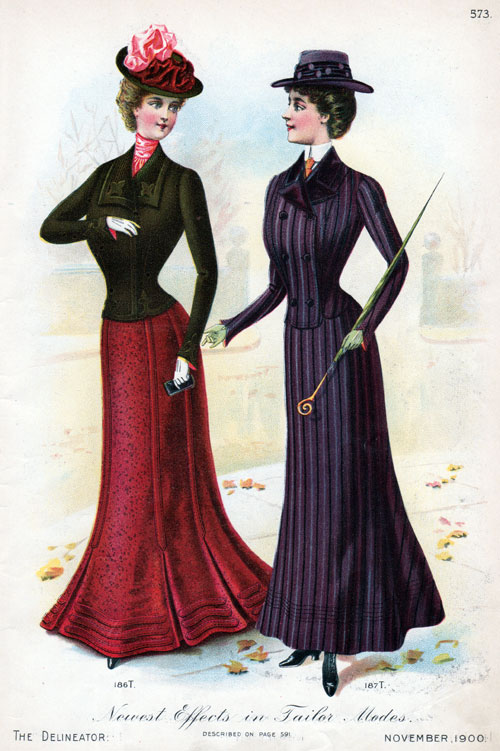 Probably this season’s revolution in gown designs has aroused no stronger interest in any point than in regard to tailor-made dresses…the desire to go around with as little luggage as possible, gives special interest to the tailor gown as the most suitable all-around costume yet invented for women. With the help of fancy blouses, dainty laces, jeweled girdles and similar knick-knacks, the tailor gown may be transformed into something much more elaborate at a moment’s notice. How desirable this is to women who have had occasion to wear one dress for even a few days at a time will be thoroughly appreciated. New York Times (1893)

It is no coincidence that around the time when America and Europe’s “surplus” women began to move into the workforce, women’s clothing took on a decidedly masculine appearance. The tailor-made, or as the French termed it, le tailleur, epitomized the new and public spheres which women began to enter. 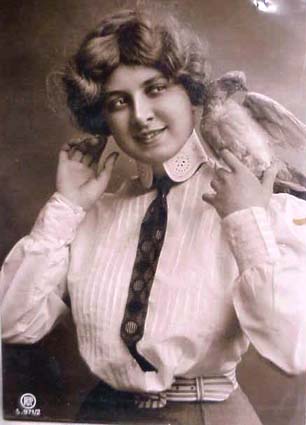 How, when and who invented the tailor-made is up for conjecture. Some accounts recount the visit of an English duke to his tailor, who made him a tweed suit so pleasing, the duke ordered a similar outfit suitable for his wife. Another story featured Alexandra, Princess of Wales, noting that when she and the royal trunks failed to make connections on the occasion of a certain ceremonious dinner at a brilliant English house-party, the Princess, too gracious to spoil her hostess’ plans, resourcefully directed her maid to cut off the skirt of her riding habit.

The most credible story however, features the tailor commonly associated with the tailor-made, John Redfern. Accordingly, like most tailors of the late Victorian era, Redfern added a ladies’ department to his establishment. When Cowes became the center of yachting in the 1870s, Redfern adapted his designs for yachting outfits. The success of his flourishing business was assured when Lillie Langtry wore one of his train-less tailor-mades to the Cowes Regatta in 1879.

Despite being vetted by such illustrious women as the Princess of Wales and Lillie Langtry, among others, the tailor-made costume seemed to the older school repellently masculine. It was the first move towards a style signifying (unconsciously) that the wearer was engaged in some other pursuit than the capture of a man! This old-fashioned opinion was not helped by the growing numbers of women of all classes dining in public, taking up smoking, living and/or entertaining on their own, going about unescorted, and using slang! Though waistcoats for women with distinctly masculine connotations appeared in 1846, the tailor-made of the 1880s and 1890s, coupled with a four-in-hand tie, a shirtwaist, and a boater or another masculine hat style, was a strong statement for independence.

1 thought on “The Tailor-Made”