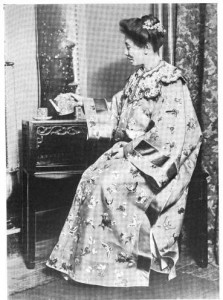 Dr. Yamei Kin (1864-1934) was a contradiction. The product of American-upbringing and Chinese heritage, she held the traditional values of the turn-of-the-century, but was both modern and fiercely feminist. Her parents were progressive, especially her mother, who, despite submitting to the traditional practice of foot-binding, was educated at seminary and chose her own husband. Tragedy struck when a fever epidemic swept her birthplace of Ning-po (Ningbo), leaving Yamei Kin orphaned at the age of three. She was adopted by Dr. D. B. McCartee and his wife, American missionaries who moved to Japan shortly thereafter. The McCartee’s were progressive in their own right, taking care to raise their new daughter with an awareness of her heritage.

“She did not have to give up her chopsticks for knife and fork. She was allowed to wear her hair oiled flat to her head in front and in shiny braids behind, and run about in the quaint little embroidered breeches of Chinese girlhood. And before she was taught any of the English branches she was given the regular course in the Chinese classics and a course of study in Japan. Then they brought her to America to complete her education, for it had been decided that she should study medicine. She was still too young to enter college when she came to the United States, so she took a course at a preparatory school before entering the Woman’s Medical College of New York, which is affiliated with Cornell.”

At the time there were very few women studying medicine, and definitely no Chinese women. But Dr. Kin exceeded the expectations of a woman and of a Chinese woman, and graduated from the medical college at the earliest age a woman could be graduated.

According to Yamei Kin:

“I had the rather unusual advantage, too, of clinical practice,” she added. “I have been surprised to learn on my return to this country that there are only two hospitals in New York where women are allowed as internes. Your men have allowed women to be stenographers and clerks and some other things that they do not care particularly about being, but they still guard the professions by seeing to it that they alone have such opportunities in education as that which clinical practise gives to medical students.”

She then pursued specialized studies in medicine in Philadelphia and Washington, D.C., after which Dr. Kin returned to China, where she challenged both the typical female role and traditional Chinese medicine. Being Chinese, yet raised by Americans, while at the same time, being an anomaly as a Chinese-American woman, Yamei Kin found herself in the position of looking at China and womanhood from a unique vantage point. With this in mind, she traveled throughout America, giving talks about China and Chinese people to foster understanding between the two countries.

“We have many problems in China, but we must work them out for ourselves. The Westerner cannot do it for us because he cannot understand the Oriental temperament. Of late many Chinese have visited Europe and America to study Western conditions. The result is that for the most part they have been swamped by this aggressive Westernism which insists upon being swallowed whole.

Western civilization, particularly as developed in America, cannot be applied in its entirety to China. We must take into consideration the difference in temperament of the two peoples. China cannot turn her back on her centuries of history and tradition, even if she would. We must consider what she is and follow a constructive policy. We must not destroy to build anew. We cannot break up the family into individuals and work back again from the individual to the family. Conditions favored this re-constructive policy in America, but China cannot wipe out her past.”

Dr. Kin’s interest in China’s progression into the twentieth century came to focus on women in China, their traditional roles and promoting their education. With the influence of the Chinese Minister in Washington and President Roosevelt, Kin moved to China and was asked to take charge of the first woman’s hospital and training school for nurses organized by the Chinese Government at Tientsin. Dr. Kin was made superintendent of the Pei-Yang Woman’s Hospital, which served women and children, and with other female doctors (among them Mary Latimer James, an American gynecologist) treated from one hundred to two hundred patients daily. Kin later founded a nursing school named the Northern Medical School for Women which primarily enrolled girls from poor families in Zhili, where she was headmistress of the school and also taught courses.
The Northern Medical School for Women taught two two-year courses in obstetrics and nursing which included general pharmacology, public health and vaccinations. Students also learned theory in the classroom and also practical primary nursing.

By the late 1920s, students of the Northern Medical School for Women were among the best-trained and highly-skilled physicians and nurses in the country. Kin’s vision of introducing modern medical practices into China was fulfilled by the growing presence of women practitioners in leading hospitals, as well as the use of these women doctors instead of midwives. By the time of Yamei Kin’s death in 1934 after a bout of pneumonia, she was praised as a renowned expert in the international medical profession and an outstanding woman in all respects.